Bradford Trojan makes the kind of music that feels both sun-kissed and world-weary. Weather worn pop songs that fall into the category of DIY, but not lo-fi. His tunes are like finding a cassette underneath your car seat that’s been there years, maybe even decades. Unmarked you put it in the deck and find this lost pop gem aged by summers and winters in a ’95 Honda Civic, the tape intact but not as crisp as it used to be.

On his latest release, the dusty gem Meanwhile, Bradford Trojan collaborated with Dr. Dog’s Scott McMicken. Friends since their days at West Chester University, the two worked on the album in Tuscon, AZ where they both call home. The result is an album steeped in indie rock grit and 70s pop shine, giving Meanwhile the kind of good mood vibes we could all use right about now. 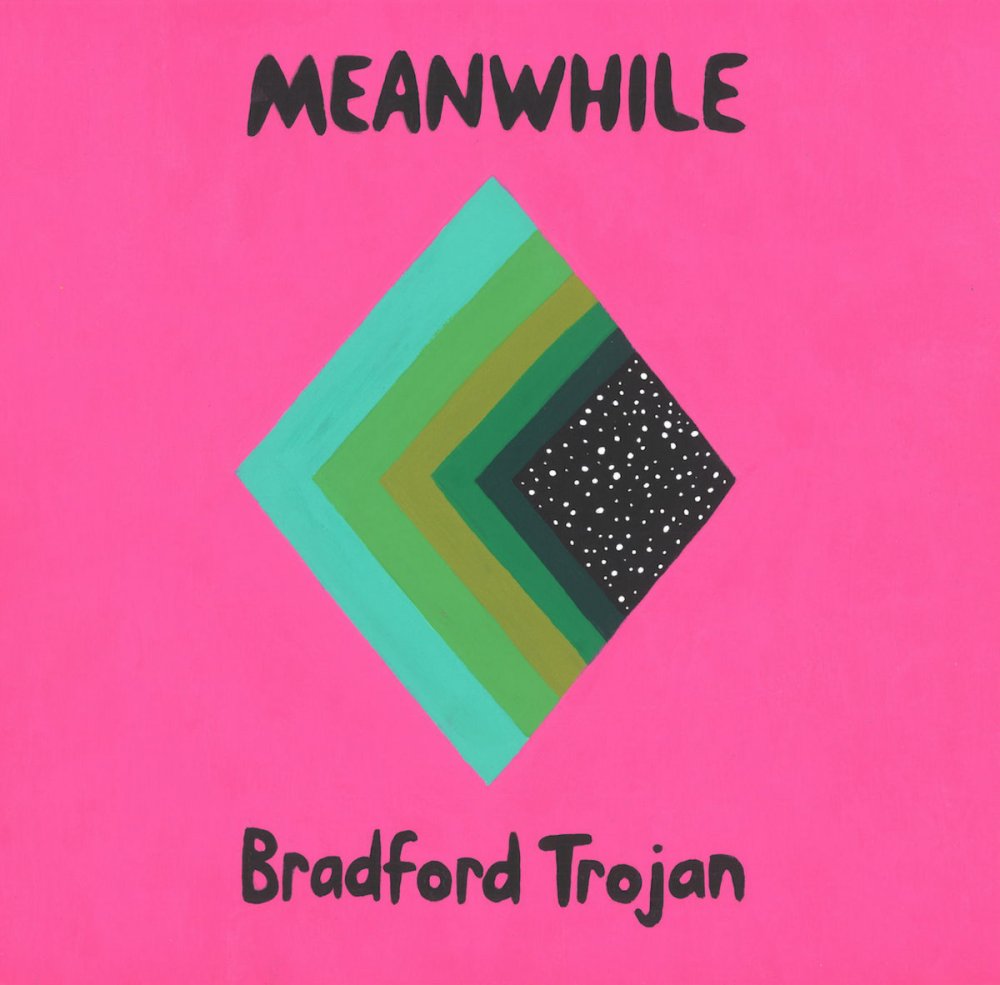 While yes, Trojan has much in common with Scott McMicken in regards to writing and style, Meanwhile is definitely not just a Dr. Dog side project. Bradford Trojan works in more mystical, galactic realms. Tasteful touches of psychedelia, subtle synth use, and less of the sepia-toned nature of McMicken’s main gig, Meanwhile has more in common with Kelley Stoltz than Dr. Dog. Scott McMicken adds his tasteful harmonies and writing vibes while letting Trojan take the lead. It’s a fantastic partnership.

Opening track “Meanwhile” lays down some jangly vibes, a mixture of The Band and Grateful Dead with some space-y melodies in the chorus. “Heaven Only Knows” does echo McMicken’s main gig in that opening guitar but it quickly becomes something else. A bit of an island vibe with subtle sonic touches that turn the song into something quite unique. There’s touches of Jerry Garcia and Jim James in the vocals which only add to the song’s familiarity. “Someone Unknown” wobbles like some long forgotten song. The reverberated vocals give the proceedings the feeling of floating in space. There’s a kind of sleepy peace that comes with this track.

Elsewhere, “Modern Man” sounds like a campfire sing-a-long on the moon. It’s like Smiley-Smile collided with The Guilded Palace of Sin in an analog synthesizer. It’s disorienting and gorgeous. “Undying” does bring to mind We All Belong-era Dr. Dog, but with a touch of Raspberries. “Forever and Never” closes out the album reminiscent of Joe Walsh, Beach Boys, and George Harrison. A great ending to a great album.

Meanwhile is a breezy pop record that shows Bradford Trojan and Scott McMicken making up for lost time. A record made in the sun that shares the light that helped these songs grow.

‘Meanwhile’ is out now. Buy it here.