When I was little our family would occasionally drive west 2 1/2 hours to Chicago for a weekend event. Be it the Brookfield Zoo, a White Sox game, the Science and Industry Museum, or the Field Museum. These were isolated events because my dad wasn’t a fan of Chicago traffic, so it had to be something special for us to cross the Chicago Skyway and venture onto Lake Shore Drive.

One of these weekend events we went to the Adler Planetarium. I was particularly excited about this trip as my dad had told me it’s like sitting in a recliner and looking up at the universe from your backyard. Except, you’re inside and you don’t have to worry about mosquitoes or the neighbors being too loud. 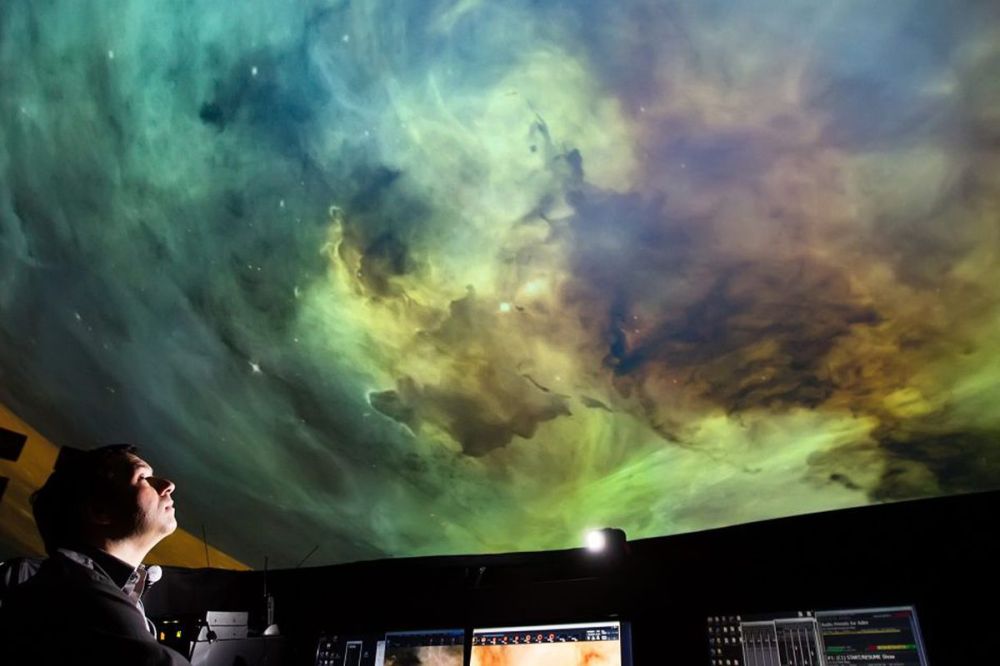 We arrived on a hot and balmy afternoon and it was everything my dad had built it up to be(including being mosquito-free inside.) An old domed building right on the shore of Lake Michigan, it felt distinguished and important to my 8-year old brain. And the seats were comfortable as well. Not like my grandma’s recliner or anything, but not too shabby. When you compare it to the 2 1/2 hour drive in our Omni Miser and that car’s extra hard and plastic interior the planetarium seats felt like Sealy Posturepedic. And the fact we got to sit in a giant dark dome, in air conditioning, it was like a exotic reprieve from the humid summer air of mid-afternoon Chicago(even on the Lake Michigan shore.)

The lights went down and the show began. The projected scenes on the dome ceiling showed native American Indians around a campfire as the constellations came into view. We then went into deep space and the booming voice that came out of the house speakers talked of different planets, and those planets’ various moons. I was enthralled with it all, but then I became absolutely horrified when that voice began to talk about the sun.

Everything was fine until the voice began to discuss the ultimate destruction of planet earth by eventually being consumed by the sun…in roughly a billion years. Sure, it would take a billion years for this planetary nightmare to happen, but that voice from the house speakers suddenly became stern and serious. There was conviction in the disembodied voice that spoke of galactic doom, with the sun in the center of the ceiling getting bigger and bigger and bigger.

The domed room lit up like Fourth of July in there, and my eyes became as wide as saucers. I could’ve sworn it got hotter in there, too. My skin reddening and blistering as my dad’s mustache caught fire. My older brother staring on as the bill of his Cincinnati Reds ballcap withered from the solar heat coming off the ceiling. We would perish on the shores of Lake Michigan, and before I even got to eat that cheeseburger Happy Meal my dad promised as we drove by the Skyway McDonalds on our way to solar doom.

But then just like that it went dark and the house lights went back up. People were shuffling from their seats to the aisles so they could exit the funny dome building and hit Shed’s Aquarium or throw up on the elevator heading to the top of the Sears Tower. I was pale with fear and panic as we entered our Chrysler hot box. I went thru the motions of a good time as we looked at mummies at the Field Museum, all the while my mind going back to that sun as it grew and spread over that old, white ceiling. My brother’s twisted face in the synthetic sunlight as he mouthed “We’re doomed” and laughed maniacally to himself.

I never thought that feeling of dread would leave me, that is until we hit the Chicago Skyway McDonalds on the Indiana side. The doom suppressed and subsided as I consumed my cold, plastic-y cheeseburger and greasy fries. Orange soda washing it all down my gullet and holding the Star Trek II: The Wrath Of Khan iron-on patch that my mom would iron on my sweatshirt the next day, I quickly forgot about the cosmic terror and solar devastation that awaited my distant kin a billion years from 1982.

38 years later and I’m starting to be reminded once again of that afternoon of fear and education in Chicago, as the sun nowadays feels warmer than it used to. Five years ago I could easily spend an afternoon in the sun, working in the yard or taking in a 3 to 4 mile walk with no problems. I rather enjoyed them, actually. Good old vitamin D and a hell of a way to get some exercise. But recently I’ve noticed that even on relatively mild days temperature-wise, that sunlight is really, really hot. Like, even when it’s 75 degrees out the sun seems to be cooking at a much hotter level.

We’ve been hearing for 35 years that we’re destroying the ozone layer. You know, that protective outer shell that surrounds the earth and keeps those UV rays in check? Like the outer coating of a peanut M&M that protects the milk chocolate and stale nut from the outside world, the ozone layer kept pale dudes of Prussian descent safe from skin cancer, at least for a limited time. But thanks to girls with teased hair and guys with teased hair using cans of aerosol hair spray in the decade of moonwalking and pegged jeans, there’s a massive hole in that ozone layer letting in raw, unfiltered heat in.

The talk of holes in the ozone layer seem to have subsided back in the 90s, taken over by the fear of the one world order, religious freedoms, and what’s really in a McDonalds hamburger patty. Well I’m hear to tell you I think the ozone layer has been disappearing consistently since the 80s. The sun is hotter. The sun is coming for us and there’s nothing we can do to stop it, except maybe live underground or cover ourselves in those sheets you put in the windshield of your car so it doesn’t get too hot while parked at the mall.

This past Sunday I was outside for roughly two hours mowing. I was done by 10 am, but I stayed hot all day. It was like my head was on fire. I just couldn’t cool down. Granted, it was a toaster of a day. Even at 9 am it was like 95% humidity and about 83 degrees, but I felt like Ghost Rider sitting in the living room in the AC watching TV. If the world isn’t getting warmer as a whole, the sun is getting hotter.

Or we’re getting closer to it.

Maybe those Indians on the domed ceiling of Adler Planetarium were trying to tell me something all those years ago. Maybe that disembodied voice that boomed from those ancient speakers was off by several hundred million years in his calculations. Maybe we’re heading right for the sun and nobody is telling us because 2020 has already been a real shit year. Scientists feel bad for us already, so they’re just keeping that other bit of news about a solar collision to themselves. Maybe they’re hoping we just destroy ourselves before the sun comes knocking on the door to give us one massive sun burn for eternity. Not sure a McDonalds cheeseburger and fries is going to make me forget about all of this now.

And what’s in that meat anyways?