The name Justin Pinkerton is synonymous with California psych. He’s played in Golden Void, Roots of Orchis, and Corsic, and in 2018 Pinkerton released and album as Futuropaco, an amazing Italio/psych groovefest. That record was this time capsule to mid-to-late-60s Italy and European countrysides, slathered in masterful drums, fuzz guitars, and the feeling of losing yourself buzzing around cobblestone streets on a Vespa.

Which now leads us to Glass Parallels.

Glass Parallels is the latest Justin Pinkerton project, but older than Futuropaco. Like Futuropaco, Glass Parallels is another solo venture in which Pinkerton tinkered and labored in his home studio for 7+ years. Recording when time allowed, he recorded all the parts til they were right. But this time he recorded vocals. The results are the dreamy, hazy psych/pop album Aisle Of Light. Sweeping in scope and meticulously put together, Aisle Of Light is a kaleidoscope of sound and emotion. 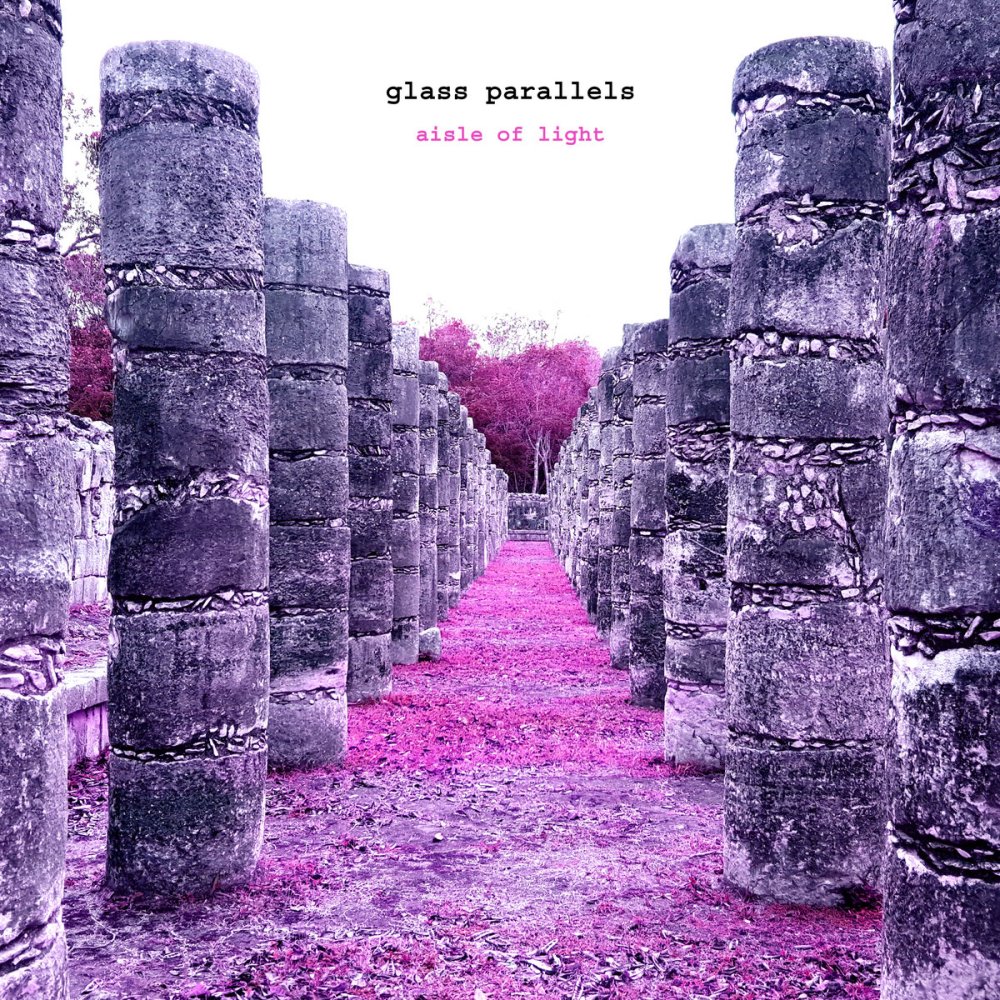 With Aisle Of Light, Pinkerton set out to make simply a collection of songs. A record to drop the needle on in the basement, plop down in the bean bag, and just float a bit. No grand themes or concepts. Just a great album to get lost in. Sometimes those are the hardest to pull off. The laid back listen is anything but laid back when being created, especially when it’s one guy in his basement studio with no one to turn to and say “Is that enough? What do you think of that snare sound? Is that fuzz fuzzy enough?” You can hide behind concepts and themes and narratives to some degree. You can get away with heavy handedness on a prog outing. Not on a collection of songs. Each song has to land. Fortunately for Justin Pinkerton Aisle Of Light lands perfectly.

I love the fact that you can just randomly drop into a song on this record and be floored. When I first listened to Aisle Of Light I listened all the way through and it felt right. On my second listen I dropped in on certain tracks, ones that peaked my interest first time through. “Embrace” was one that absolutely stood out. It’s a gorgeous, melancholy pop track that is carried by an eerie vocal sung through a Leslie speaker and electric piano. It makes me think of The Band, but if they’d all been heavily into Roky Erickson, the Zombies, and staring out at the sea on overcast days. Pinkerton has stated he’s not a vocalist at heart, but this song proves otherwise. Simple, engaging, and sad in all the right ways.

On the other side there’s the groovy “Concrete Eyes” which puts me in mind of those Futuropaco vibes. Tasteful organ, wah guitar, and falsetto vocals floating in the air, the track is a woozy slap of psych pop. “march & april” is more instrumental than it’s not, with Pinkerton’s vocals lazily popping out like the sun on an otherwise overcast day. Justin treats the vocals here more like another instrument than taking the lead spot, giving his presence an ethereal vibe. “Asphyxiate” is a fuzz-led rocker with elements of Nuggets-era psychedelia. Tastefully constructed, delightfully woozy.

If you’re looking for modern sounds to tie Glass Parallels to, I’d say if you dug the first Melody’s Echo Chamber album, early Tame Impala, the Lips-heavy Electric Würms project and The Besnard Lakes then you’ll find much to love with Aisle Of Light.

But really, look at Justin Pinkerton’s Glass Parallels as its own little psychedelic island. In a sea of many colorful shores to land on, Glass Parallels has colors completely its own.