A true sign of a psych band worth their weight in hallucinogenics is their set at Roadburn. Many bands have stepped on the stage in Tilburg, Netherlands, and when they do they need to bring it. They need to bring it all and leave nothing but scorched earth, sizzled amplifiers, and melted faces in the crowd. It’s a true test of a band’s moxie when they can walk away from Roadburn and say “We did it. We took that crowd on a exploration of the mind, body, soul, and they’re still recovering well after we left the stage and packed the van full of our gear.”

I’ve heard some amazing sets from Roadburn. Earthless killed it, so did Papir. True Widow, Harsh Toke, White Hills, all of them decimated that crowd with blistering sets. One more band you can add to that list is Mythic Sunship. Changing Shapes is about as monumental of a set as you can get. Recorded at one of three Roadburn shows in 2019, Changing Shapes documents Mythic Sunship, which includes Rasmus Cleve Christensen(bass), Frederik Denning(drums), Emil Thorenfeldt(guitar) and Kasper Stougaard Andersen(guitar), along with saxophonist Søren Skov, as they lay waste to both old and new tracks. With the help of Søren Skov, Mythic Sunship conjure vibes of Interstellar-era Coltrane, a free-form psych mind meld that is both a monumental molten dirge and spiritual awakening of the heaviest kind.

What Mythic Sunship do during this explosive set is tear down what they’ve done on record and rebuild it from the foundation up. They construct something far more expansive and encompassing. With the exception of “Ophidian Rising”(Ouroboros) and digital bonus track “Elevation”(Another Shape of Psychedelic Music), the tracks recorded at Roadburn are live, free-form jams that show both the musical brawn and intellectual depth this four-piece can create. It may not be everyone’s cup of tea, but for those that find their way it it’s a heavy trip, man. 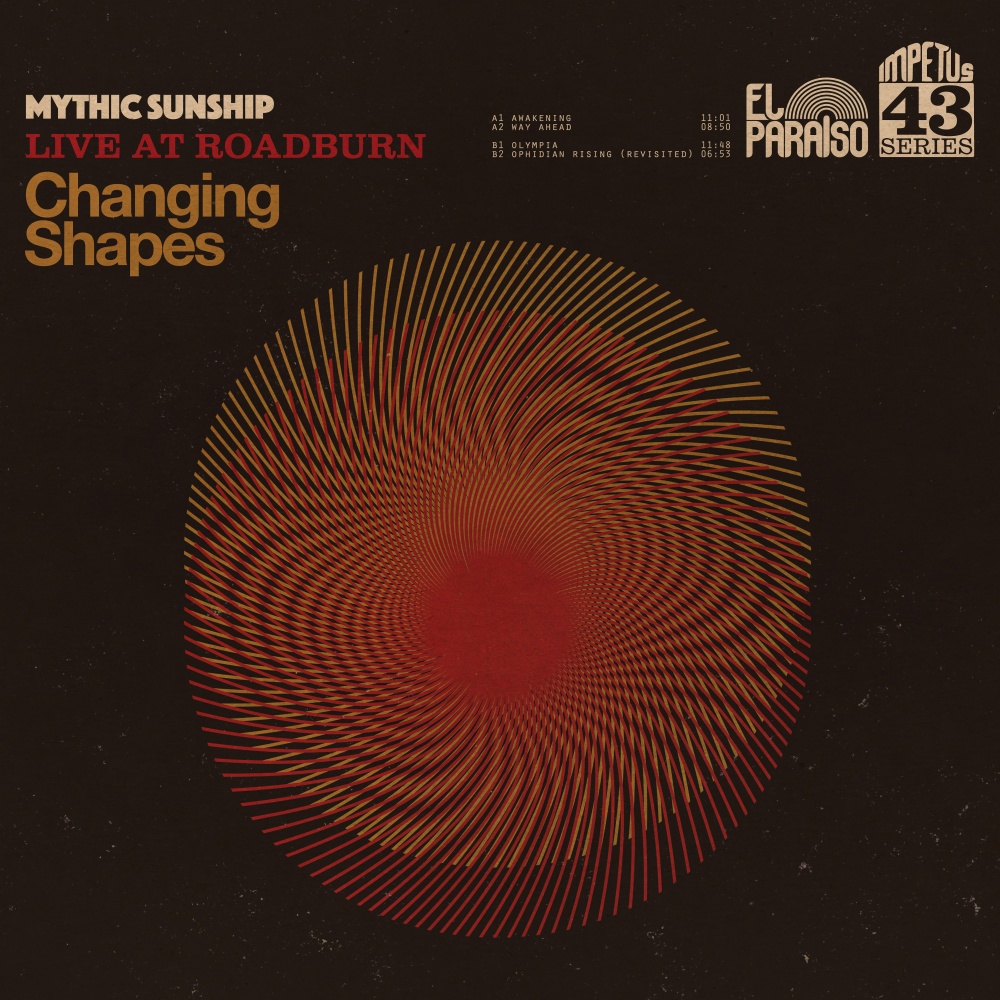 “Awakening” seeps from the speakers with Søren Skov and the Mythic Sunship crew hitting light speed and heading into the atmosphere. A bombardment of the senses hits you with withering force as the saxophone coalesces with the doom-laden jam Sunship concoct. In contrast, “Way Ahead” is an all-out jam of the highest order. A funky guitar riff starts the song out as if we’ve found some lost Miles On The Corner take. The song moves into a serious guitar jam as the rhythm section of Christensen and Denning go full Mitchell/Redding. We hit galactic highs here.

This set is a fiery shot of free-form space rock. A band in great form letting the universe guide them in an evening of visceral and spiritual musical world building. Hearing album tracks like “Elevation” and deep cut “Ophidian Rising” in raw form is a special treat, but the secret weapon here is the monumental “Olympia”. This incredible cut opens with almost geometric guitar lines before the drums roll in with a steady rhythmic foundation for the band to take off from. A sonic temple of old school and new school technique, “Olympia” truly signifies the future world we have to look forward to with Mythic Sunship.

If Roadburn is truly the proving ground I make it out to be, then Changing Shapes is an album to be looked upon as the gold standard in live albums. A sonic footprint few could fill.