Monarch is of course the name of a butterfly. It’s also the name of a southern California 5-pc rock band that mine rock and roll magic from a time when people still believed in the stuff. A time when headier states of mind, triple guitar attacks, and soulful undertones brought forth the best in us. The name suits the band, as their music is transformative; a mixture of psychedelic vibes, triple guitar harmonies, soulful vocals, and a rock solid rhythm section. They go from bluesy jams to heady instrumental interludes at the drop of a guitar pick.

Monarch, which consists of Dominic Denholm(Guitar/Vocals), Thomas Dibenedetto(Guitar), James Upton(Guitar), Matt Weiss(Bass), and Andrew Ware(Drums), are part of a movement of modern rock bands bringing back the spirit of psychedelic exploration thru music. Along with bands like Earthless, Astra, Psicomagia, Joy, Brian Ellis Group and Harsh Toke, Monarch mix the heavier elements of early 70s psych and doom with the free-spirited vibes of both Woodstock-era Santana, WAR, and even the Allman Brothers Band.

Monarch released their El Paraiso Records debut Two Isles back in 2017. Now they’ve just dropped that album’s follow-up, Beyond The Blue Sky. Monarch don’t veer too far off course from what came before. But what they have done is honed in on their impeccable musicianship and opened their songs up significantly. There’s an improvisational spirit in the songs, while still feeling like tightly constructed rock and roll. Monarch have taken flight, and it seems the blue skies are limitless. 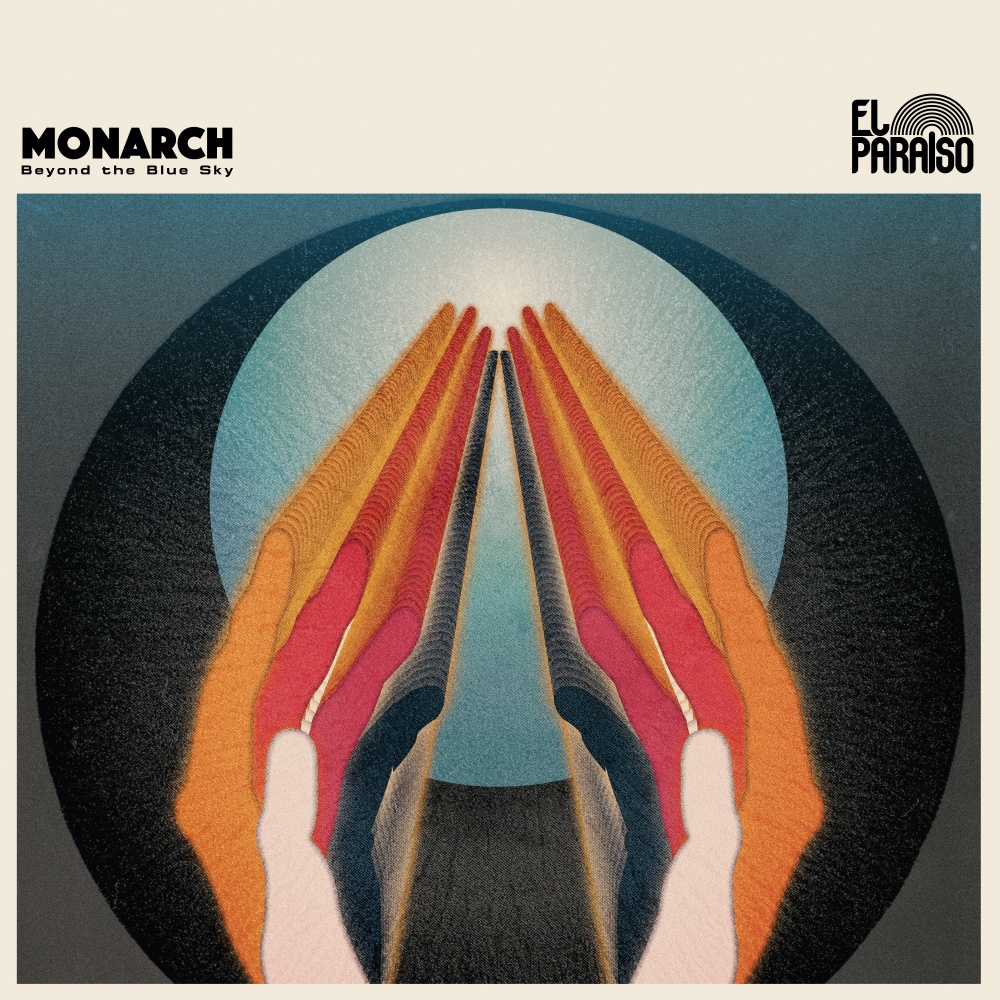 “Hanging By A Thread” is the opening salvo and it’s big one. Coasting on an almost jazzy swing, keys, and a triple guitar attack that is equal parts Allman Brothers Band and Iron Maiden, Monarch make no qualms about where they’re taking us on this trip. Dominic Denholm’s vocals float just under the mix, sounding like a narrator to the journey we’re about to take. This is southern Pacific psych done right. “Pangea”, named after either the super continent that existed during the late Paleozoic and early Mesozoic eras or the Miles Davis record, lives up to its heady namesake. Groove-heavy and filled with both mysterious passages and heavy guitar riffs. Electric piano adds a touch of simplicity to the intricate guitar lines and almost heavy metal vibes in the breaks.

Title track “Beyond The Blue Sky” is an absolute killer southern-fried guitar jam, bringing to mind the best of Lynyrd Skynyrd’s guitar attacks, The Southern Harmony and Musical Companion-era Black Crowes, and Allman Bros soul. Of course Monarch add their own bit of freeform psych magic. It’s over six minutes of pure rock and roll bliss. This is also part of a suite of sorts. “BTBS” is followed in quick succession by “Phenomena” and “Counterpart”, which  when all three come together feel more rooted in the NWOBHM than southern jam bands. It’s a pretty epic trip.

“Felo De Se” ends the album on a dusty, windswept note. Desert LSD dreams and endless blue skies bleeding into oranges and reds, ending up part of the dystopian landscape come to mind as this song closes out the proceedings. Perfect, far out ending.

Beyond The Blue Sky sees Monarch taking their already solid concoction of classic psych and southern Cali guitar jams and adding a pinch of interstellar magic. The results are an epic rock and roll album that works to free the soul and expand the mind.