Sometimes things happen in life that make you re-think how you approach the world. One moment pushes you to realize there’s not much time on this earth for us after all, and if you truly want to make a mark you have to step out of your comfort zone and go for it. Something like this happened to composer and graphic artist Thiago Desant, known musically as Phantoms vs Fire. Earlier this year Desant’s laptop was stolen and this act of thievery made him realize how fleeting our creative process can be when in a second that work could just disappear. Desant wanted to make sure his work as Phantoms vs Fire was as free and creative as it could be. No regrets about not going for something because it might be too weird, personal, or out there.

So in the throes of a near creative disaster, he set out to make something for him, regardless of what a label might think. The results are the dense, dark, and beautiful My Mind As Your Amusement Park. It’s a 10-song long player that plays like a walk into the psyche of a waking mind. At times quiet and calm, at other times dark and foreboding, My Mind As Your Amusement Park is Phantoms vs Fire’s most creative, out there, and engaging album yet. Thiago Desant has made a next level piece of musical art. 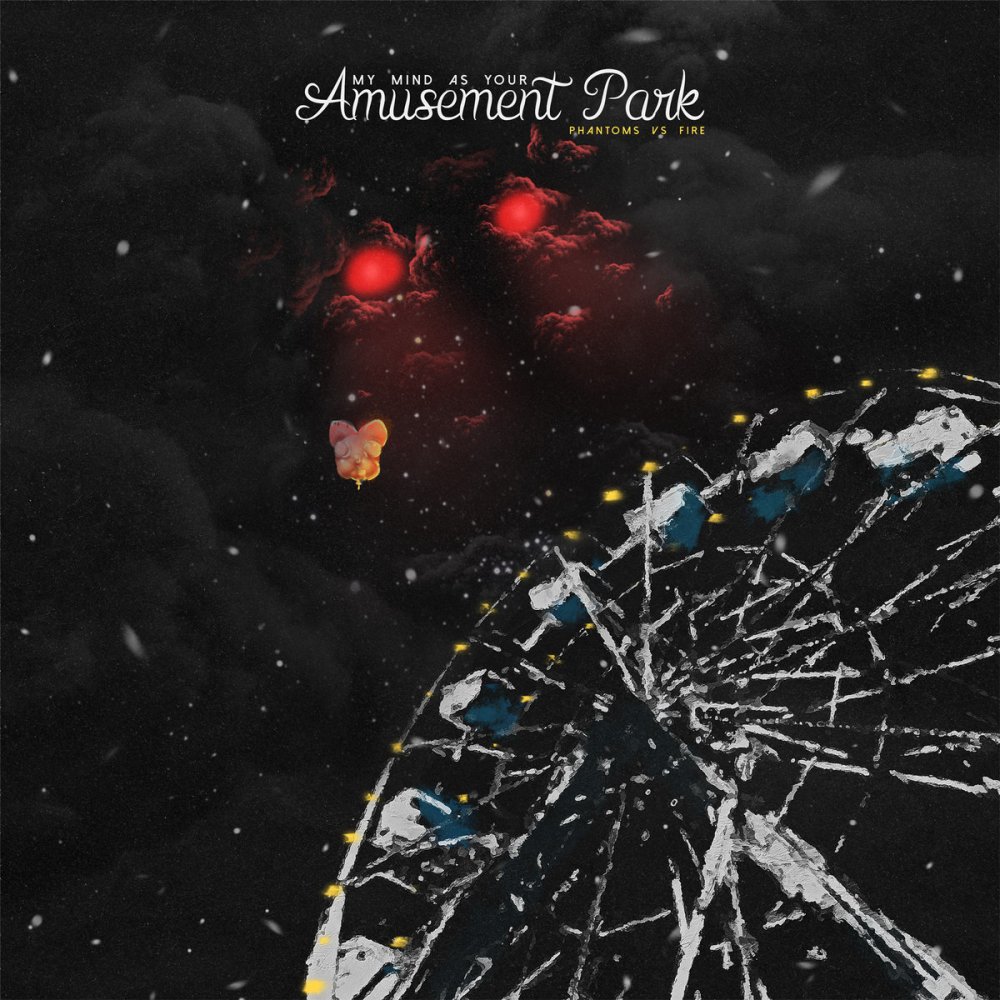 If you are familiar with Phantoms vs Fire’s previous output, then this album won’t be a complete shock to you. The unique sound layers, top tier production, and all around sonic delights are still there. But the synth grooves and tip of the hat to 80s synth pop have all but left. What we have here is an album of almost patchwork pieces; a collage of thoughts and emotions sewn together with Desant’s imagination and need to embark on a new sonic journey. He begins not with a white canvas, but a black one and paints us vivid images in reds, blues, and dayglo colors. Out of the darkness, and into the light, so to speak. Or at least into the dusk.

“In Love With A Glitch” really does announce where Desant is right now. It’s a thunderous piece that opens with cavernous sound that turns to to beautifully plucked what sounds like dulcimer, or harpsichord. The wails and calls from some open void lay just under the surface. A mix of darkness and beauty, which could really be the theme for this album. “Arrival” opens with the swish of what sounds like air as sonic moans emanate from a deep well. Synth notes appear from the darkness, as melodies layer onto one another. It’s both ominous and melancholy. This song also feels like a nod to both Johann Johannsson and Wendy Carlos. “As The Ashes Touch My Skin” is a dichotomy of senses. The brazen buzz of synth feels like oncoming destruction as fluttering high notes stay just above the surface. Birds chirping in the background as if they have no idea what is coming.

Two of the most intriguing tracks here are title track “My Mind As Your Amusement Park” and “Otherworld Cacophony”. The former sounds like a glitched out version of the Phantasm theme, all melancholy melody that begins to distort into itself. One of the few tracks with a rhythm track, it stands out as a perfect theme for the record. “Otherworld Cacophony” sounds like some western theme to a dystopian film. Beginning with electronic whining and an acoustic guitar, the track quickly descends into distortion and chaos. Sonic madness, in its purest form.

Desant has truly stepped into another realm here. From moments of glitchy beauty to ambient doom, My Mind As Your Amusement Park feels like a free fall into a Hell of one’s own making. A journey necessary in order to come to some agreement with the universe. I think Phantoms vs Fire has indeed come to an agreement with the universe, and one we’ll all be the better for it.

Phantoms vs Fire is crowdfunding a vinyl release of My Mind As Your Amusement Park right now. Head over to the Qrates page and fund this amazing release. It’s all or none, so if the goal isn’t met all money is refunded and the vinyl doesn’t happen. Buy a copy, buy two copies, and then tell your cool friends that dig forward-thinking music to buy a copy or two as well. Support real art right at the artist level.