Adventures in walking.
Two for one.
Overcast day. This’ll get things moving. #madlib
Sometimes it may feel like it, but the earth indeed is not a cold dead place. Beautiful reminder from @explosionsinthesky
New @holodeckrecords single out now. @fireswereshot drops a heavy dose of meditative bliss with “Dripping Bright”. Link in bio.

I first discovered Paul Gilbert when I was a freshman in high school. Somewhere around 1988 or 1989 I picked up the Racer X album Second Heat and I was immediately blown away by the incredible Mr. Gilbert. I wasn’t as blown away by Racer X, but man could Paul Gilbert play. My admiration for the guy was solidified during a guitar clinic I saw Paul at not long after that in Fort Wayne, Indiana at the Music Spectrum. There, Gilbert showed what a down to earth guy he was, and how at ease he was at playing and explaining in front of large crowd. He also previewed a song from an upcoming album he was on in a band called Mr. Big. I think they might’ve done alright, too.

Of all those 80s shredders Paul Gilbert has retained an air of majesty in my eyes. He’s continued to work, evolve, and share his knowledge in clinics and online videos. He seems to be the same dude I saw in instructional videos with long hair and shredded t-shirts, except now his hair is short, he wears glasses, and his shirts aren’t so tore up. Paul’s newest album is the John Cuniberti-produced Behold Electric Guitar. For all of those guitar heads out there Cuniberti should perk up your ears as he has been Joe Satriani’s longtime producer. He’s the master at making guitar players sound as good as they can. Behold Electric Guitar began as one of Cuniberti’s One Mic sessions, but it didn’t work out. So they brought in a few more mics and recorded all the tracks live and in one take. The results are simply the best Paul Gilbert album yet. A mature and engaging album of tasteful shredding and soulful grooves. 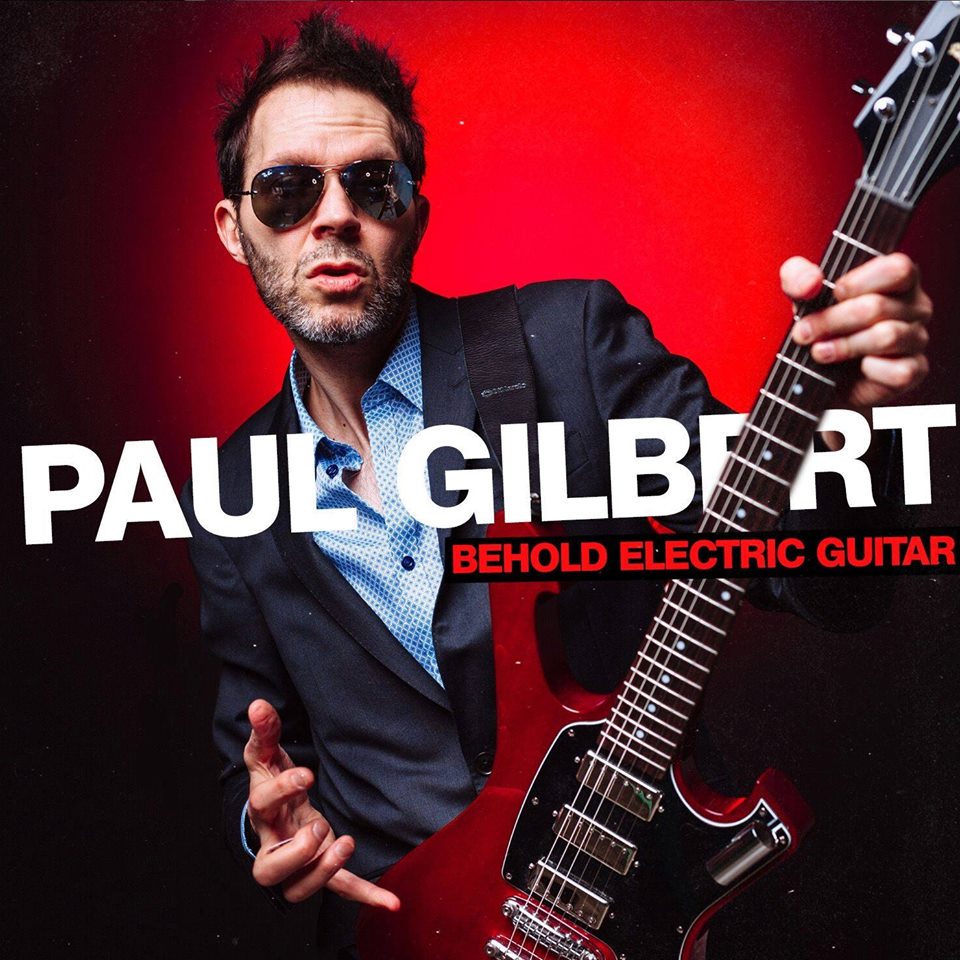 “Havin’ It” opens the album with a mixture of dexterous playing and soulful guitar touches. Gilbert has always shown that he’s adept at pretty much any style, and here he lays down some tricky riffing, breezy moments of cool vibes, and of course a bluesy delivery that rivals any current hot shot players working today. Paul is simply unstoppable. And on “I Own A Building” Gilbert shows his increasingly prodigious slide playing. I’m not sure there’s anything this guy can’t do with a 6-string. “Everywhere That Mary Went” mixes almost fusion tendencies with late night blues to come up with something wholly original. Paul Gilbert, of course, completely melts faces. His playing has not mellowed over the years. In fact, it’s gotten far more precise and technically at levels mere mortals shouldn’t play at.

I must mention here the absolutely incredible backing band Gilbert and Cuniberti have assembled. Tasteful keys add a great counterpoint to Paul’s masterful leads and in-the-pocket rhythm playing. A rhythm section that holds everything down solidly, allowing Gilbert to hit some serious hyper speed.

Between the hyper boogie of “Love Is The Saddest Thing” to the sweeping kinetic energy of “A Herd of Turtles”, complete with Gilbert’s spoken word section that sound like Ringo Starr reading to a group of preschoolers, Gilbert and the band absolutely soars. Album closer “Things Can Walk to You” is reminiscent of the best of Lowell George and Little Feat. Swampy blues mixed with a southern California feel. It’s a perfect way to close out an exquisite and one of the best instrumental guitar albums to come out in years.

Behold Electric Guitar is Paul Gilbert at his best. He can still shred like he’s 19, but lays down some mature and tasteful melodies to shred over. This is the most soulful and thoughtful record Paul Gilbert has made. Who says getting older is a bad thing?