Matt Pike has had a pretty busy year. In April he and Sleep dropped the surprise 4/20 record The Sciences. It was the first new Sleep material since their Adult Swim Singles Series track “The Clarity” from 2014. Then a couple months later Sleep drops yet another Adult Swim single called “Leagues Beneath”, possibly recorded the same time as The Sciences as both were recorded at Third Man Records. For the stoner/doom metal titans to rise from their years-long slumber to put out an album and tour was monumental, and nobody would expect Pike to release anything else for 2018. But then back in August Pike’s other band High on Fire dropped a new single, the speed demon scorcher “Electric Messiah”. In interviews Pike stated it was a bit of an ode to the late great Lemmy Kilmister, the grizzled face of Motorhead and heavy metal’s true “Electric Messiah”. Pike had long been compared to Kilmister and felt like a homage was in order.

With the single came the announcement of High on Fire’s new record, also titled Electric Messiah. The nine track, nearly one hour long album doesn’t sway from High on Fire’s usual formula of speed metal dexterity, fantastical lyrics, and scorched earth imagery. What it does do is clean up the sonics a bit, courtesy of Kurt Ballou who’s been producing HoF since 2012s De Vermis Mysteriis. The results make Electric Messiah High on Fire’s most focused record to date.

With each successive HoF album, it feels as if Matt Pike is being devoured by his own massive hesher growl. He showed some restraint on 2015s Luminiferous on the excellent and slow-churning “The Cave”. That track revealed Pike could simmer the fire in his vocal cords enough to show some longing in those metal barks. Electric Messiah says the hell with longing and is a massive kick in the gut, giving us High on Fire’s version of Motorhead’s Ace of Spades, Venom’s Black Metal, and even a bit of Slayer’s Reign In Blood. 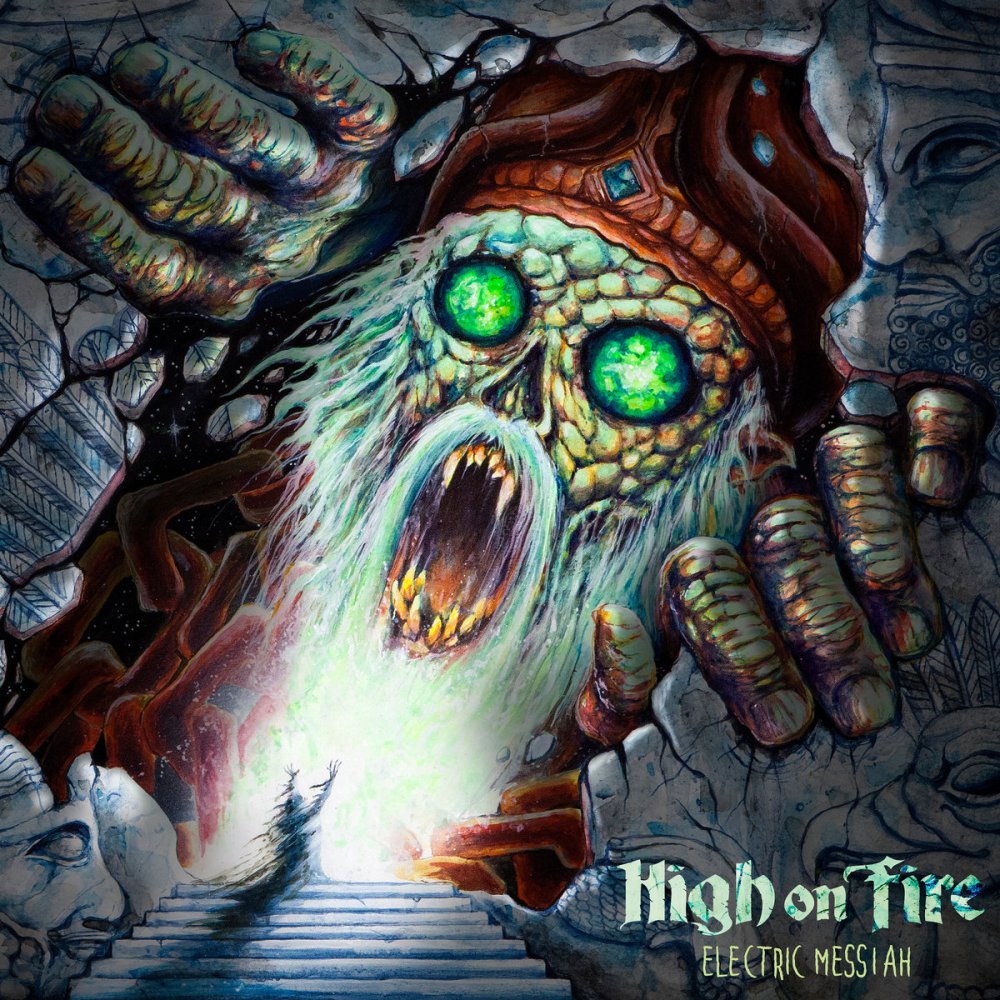 “Spewn From The Earth” is an arterial spray of hot magma and shards of glass from some torn opening that leads to the center of the earth. Pike barks lines like “Spewn from the earth/Deep in Terra’s girth/Old ones from below, once the spell awakens/Comes the armies never known” as if he’s reading from ancient tomes high atop some centuries-old pulpit. Musically this song is pulled from the classic speed metal guide, burning the earth it touches and leaving no life in its wake. For my money Des Kensel is one of the best rock drummer working, bringing the Dave Lombardo magic with every HoF album. He’s the perfect guy to carry Pike’s massive guitar riffs and doom-laden howls. “Steps Of The Ziggurat/House of Enlil” is over 9 minutes of tribal drums, blistering guitar, and Matt Pike sounding as if he’s drowning in his own blood as he screeches “Reckless abandon the overlords/The sigh of landing indigenous hordes/Plunder abundance demands the blackened swords/Genetic workers endure our earthen toil”.

You know, just another day at the end of the world.

Like I mentioned before, title track “Electric Messiah” is an all-out aural assault. I’m sure there are other bands turning amps to 11 these days, but this track is absolute fire and fury. “Sanctioned Annihilation” is the centerpiece track, clocking in at over 10 minutes and building to an ‘end of the world’ climax. Once again, HoF comes across as the heaviest band on earth with the trio of Pike/Matz/Kensel sounding far heavier than a three-piece should. At times Pike sounds like he’s struggling to belt the lyrics out under the fury of the music. Maybe the years are catching up to him. I’m not sure what mortal man could keep this up as long as he has.

Elsewhere, “God of the Godless” builds on a frenzy of speed metal might and Pike’s carnival barker from Hell vocals, while “Freebooter” recalls the punk-inspired riffage of Death Is The Communion in all its breakneck glory. “Drowning Dog” ends the album on classic Matt Pike guitar riffage, recalling Snakes For The Divine and the Bay Area metal that influenced HoF in the first place. Pike sings “And god damn you/You’re the shadows of man
And god damn you/For it’s kill or be killed in the end” over a NWOBHM groove.

It’s as if each High on Fire album is a Frank Frazetta painting come to life. Witches, ancient cities, bloodied battle fields and religious overtones are covered every time Matt Pike, Jeff Matz, and Des Kensel get together to make another album. Matt Pike is getting close to 50, not all that old by musician standards. But the extreme nature of High on Fire is a younger man’s game. He’s kept the fire and fury going far longer than most of his influences, which is impressive. I do wonder though how much longer he’s going to be able to keep belting these songs out. As far as a guitarist he’s still at the top of his game, but those vocals are getting harder each time out. He’s getting lost further and further into the mix, struggling to make every war cry reach our ears.