So there I was minding my own business perusing the interwebs and the social medias when I see a post from Christopher Ashley, aka Slasher Film Festival Strategy, 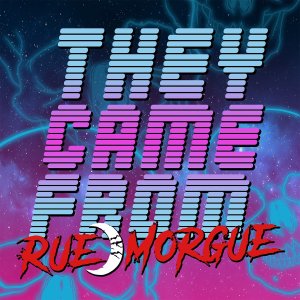 about a new compilation he is part of. It’s a track called “Faithless and Forever Empty” and its on a compilation called They Came From Rue Morgue. It’s one hell of a track. I mean, with a title like that I was in immediately. So I clicked on the Bandcamp link and headed over to check out the whole compilation. Holy hell, this pretty much has every synth artist that’s worth burying into your brain. All of them Witches, Thorsten Quaeschning & Ulrich Schnauss, Burning Tapes, Joel Grind, Antoni Maiovvi, Zombi, the aforementioned SFFS, Umberto, Steve Greene(of Voyag3r) and a whole hell of a lot more. It’s 20 tracks and at press time it was a free download(I paid a little green as all donations go to charity.)

These are heavy hitters, guys. And these aren’t throw away tracks. These are killer tunes. Slasher Dave’s “Terror In Toronto(Dave Alexander’s Theme)” is achingly creepy and full of 80s horror vibes. “The Otherworld” by All of them Witches is seriously great. Has a melancholy occult vibe. I could hear this playing over some opening title sequence to some lost nugget of the Gorgon Video days. If you’re familiar with Thorsten Quaeschning and Ulrich Schnauss’ excellent Synthwaves LP then you’ll be familiar with “Thirst”, their contribution to this excellent compilation. Listen, if you’re digging They Came From Rue Morgue and you haven’t yet heard Synthwaves, brother make amends and put it in your ears. Burning Tapes gives us the ominous and stark “Kiva”. Imagine Vangelis being influenced by Throbbing Gristle and Klaus Schulze and you might have an idea of what’s going on here. Great stuff. Joel Grind’s “Centralia” feels like some lost track from House By The Cemetery. Pretty soon the drums kick in and we’re transported to some post-apocalyptic future cruising the nuclear wasteland.

Are you asking yourself what Rue Morgue is? Well it’s a horror magazine that was launched in 1997 by  Rodrigo Gudiño and it’s pretty much THE place to head for all things horror-related. Here’s what they say on their website:

I grew up on Fangoria, Gorezone, and Gorehound magazines, so Rue Morgue is right up my alley. I’m pretty new to it, but I’ll be visiting it often. I mean, they curated this synth/horror compilation and offered it free. How much cooler can you be?

Anyways, back to the music.

Antoni Maiovvi’s “River Of Deceit” has a new age-y vibe to it. Sort of like contentment in desolation. Zombi’s “Cooties Demo” gives a glimpse of what that film might’ve sounded like in their capable hands(Kreng’s score was one of my favorites from 2014, btw.) I’m always excited to hear new Steve Moore/AJ Paterra, and this track does not disappoint. Slasher Film Festival Strategy continues to blow me away. “Faithless and Forever Empty” continues Christopher Ashley’s impressive run of horror/synth compositions. This one has the feel of Psychic Shield, but with a Fabio Frizzi lean. Voyag3r’s Steve Greene delivers with the looming and heavy “Noir, City Streets and Macabre pt. 2”, while Videogram’s “Test Subject 011” feels like some sort of space disco inferno into the heart of darkness. Umberto gives us the sly and deceptively low key “The Tower”.

There’s not a bad track here. Hexencraft, Anders Manga, LAWA, Confrontational(featuring Cody Carpenter) all deliver the goods. Start to finish folks, this one will stick in your head like bloody meat on ribs. Or something like that. Anyways, grab this great compilation and whisper an ominous thank you into the dark to Rue Morgue and all the excellent cats that made this thing possible.

Click the Bandcamp player below to check out the album and head over to the Bandcamp page and download it for free(or drop some coin and give to a good cause.)

5 thoughts on “They Came From Rue Morgue : The Musical”