Real Estate have always come across as indifferent to the world around them. They seem to be completely aware of the what’s going 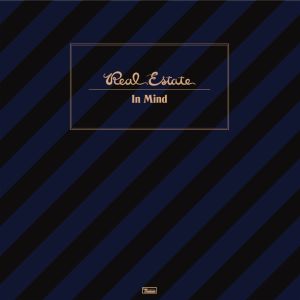 on, but despite the good and bad that comes crashing down all around they breezily strum and sing their songs of nostalgic navel gazing and pining for something they may never get. 2011s Days felt like the moment where the New Jersey crew came into their own. Melancholy jams with an east coast jangle that seemed to pay tribute to both Springsteen, the Grateful Dead, and the Feelies all in the course of a single song. 2014s Atlas solidified Real Estate as the kings of bleary-eyed jangle, taking their worldview of early 20-somethings looking for the next kegger and wanting to impress that unattainable childhood crush to almost 30 and wondering where do you go from here? Martin Courtney, Alex Bleeker, and Matt Mondanile all followed their muses to solo projects but always found their way back to those summertime New Jersey barbecues and late night rooftop ponderings that Real Estate turned into stoned meditations on suburban upbringings.

But now with their newest album In Mind, Mondanile packed up and moved away from the neighborhood for good, leaving Courtney and Bleeker to keep that porch light on for us to find our way through the fog of memories. Along with Jackson Pollis, Matt Kallman, and Mondanile replacement Julian Lynch, Real Estate have made their best record yet.

I think there has always been a progressive side to Real Estate. Not in a 2112, The Lamb Lies Down On Broadway sort of way, but in the way Courtney and company used the themes of growing up, dropping out, and wondering what it all means as a narrative throughout their albums. And musically, however breezy and pleasant the band comes across, there’s something very meticulous and forward thinking in their guitars and melodies. Lead single “Darling” is instantly recognizable with those pristine guitar lines and clean drumming, but with the addition of synths that hang over the song it feels like a step into new territory for these guys. Courtney has the most pleasant voice in modern rock and roll. He could sing directly from a phone book and there would be something mildly existential about it. This song is no different. They’ve set phaser(pedals) to stunning. “Serve The Song” has some distorted guitar opening the track before we sink into pining for childhood haunts and a pleasant dip into electric piano 70s lull. “Stained Glass” sounds like the Byrds, but without that southern California shine. It’s more like hungover melodies for the regretful morning after.

Timing has always been Real Estate’s biggest strength. Sure, the crystalline and chiming guitars, sweetly melancholy vocals, and overall dreamy aspect of their songs are great. But how they lock into each other as musicians is one of their biggest strong points. There’s a heft to this music that in other band’s hands might come off more twee. Maybe it’s that New Jersey upbringing. Take a track like “After The Moon”. There’s a certain sway in it that without that Real Estate magic might come across too soft rock, or a poor man’s Band Of Horses(as if a rich man’s BOH is any better.) In the hands of these guys quiet moments like this become almost existential. As good as each of their solo projects are, together is where the magic truly is.

Real Estate continue to move along in interesting musical directions. In Mind captures a group of guys at their best. A snapshot of “good old days” pondering, but never in a pretentious way. Real Estate are the guys at the corner bar happy to drink a beer or two with you and talk about the old times. They’ll even buy the next round. In Mind is an open invitation and a testament to that.