I usually have no problem finding words to describe an album. There are very few things I can go on and on about, and music is one of those few things. The music/production duo Alone In The Woods, aka Jon Dobyns and Lonn Bologna, are a band that make music I struggle to describe. Their musical world is so unique and one-of-a-kind that trying to put it into words seems futile. It’s dark, all-encompassing, mysterious, and a visceral experience. From their self-titled debut in 2018 to their 2019 Kwaidan, the production, sonic layers, and textural pleasures these two put into those records made them bar none some of the best-sounding releases I’ve heard in years.

Alone In The Woods make albums that feel cinematic and are structured like score work. Musically and sonically Dobyns and Bologna mix the synthetic and the organic, making real and virtual instruments nearly indistinguishable. That continues on the band’s latest album with the mighty Cadabra Records, titled Help Is Not Coming. From the stunning artwork by Zakuro Aoyama and the gorgeous gatefold sleeve it dons, to the colored vinyl, and of course the stunning music that lives within those grooves, Help Is Not Coming is another absolute game changer from Alone In The Woods.

If you sit down, close your eyes, and let Alone In The Woods fill your head you feel as if you’re transported. Despite the visceral and dark album art, the music here is more subtle. I do get Cannibal Holocaust and Cannibal Ferox vibes when I lose myself in that album art, but musically it’s more mysterious than that. Elements of hip hop, world music, and downbeat electronic live within the programmed drums.

Title track “Help Is Not Coming” is given Eastern elements in the strings and hand percussion sounds. Water runs into what you imagine a dense and dark forest that could very well hold one’s fate if not careful. Dobyns and Bologna expertly craft a whole world for us to explore here, and this opening track is the trail that leads us in. “Jungle Ceremonies” cascades down with slide guitar, synth touches, and stunning drum programming. “Plants Casting Spells” is claustrophobic with its tightly wound tension in the ominous atmospherics and what sounds like wading through dark and murky waters in some cavernous chasm. Jungle rhythms build more tension as the track moves along. 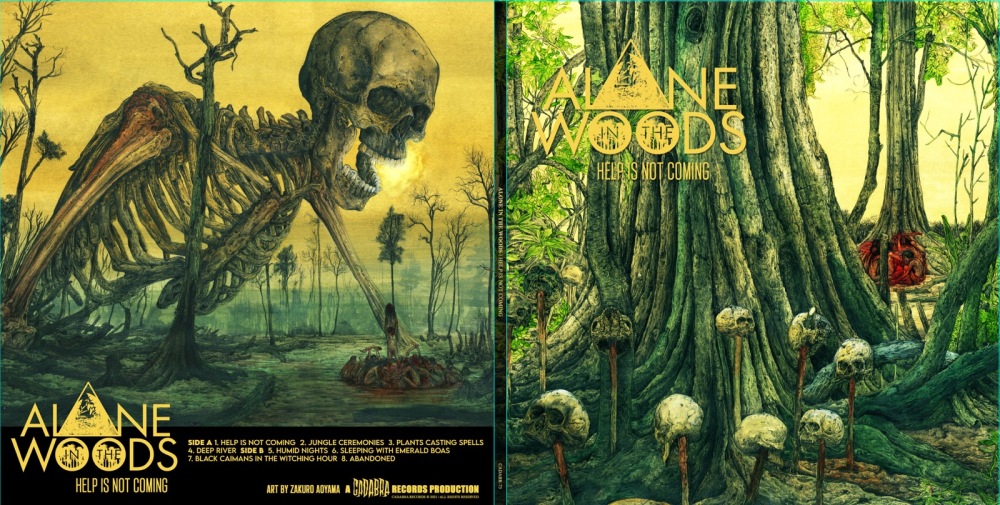 The devil is in the details, and there are so many details to get lost in with this album. The way Alone In The Woods crafts their sounds and rhythms into something that feels it was created using a room filled with musicians, various acoustic instruments, and a kind of music magic is stunning. While there is definitely some magic happening and at least two musicians in the room, everything else is left up to the imagination of the listener.

From the rhythmic and sonically slinky “Sleeping With Emerald Boas” to the wobbly closer “Abandoned”, Help Is Not Coming never relents from its goal to pull you into this darkly gorgeous and musically rich landscape. Jon Dobyns and Lon Bologna have crafted another one-of-a-kind listening experience, and with the help of Cadabra Records and artist Zakuro Aoyama its one you won’t soon forget.

‘Help Is Not Coming’ will be available for order at noon, 2/4/20. Go to Cadabra Records website to order this new stunner from Alone In The Woods.

6 thoughts on “Alone In The Woods : Help Is Not Coming”