Nels Cline has had quite the career, both before and after Wilco. A musical force to be reckoned with in the Avant Garde, jazz, punk, and experimental scene he’s played with everyone from Mike Watt, Medeski, Martin, and Wood, Geraldine Fibbers, Blue Man Group, Ornette Coleman, and Rickie Lee Jones to name a few. But for the last few years his main musical loves have been Wilco, Nels Cline 4, and The Nels Cline Singers.

Cline has released some amazing albums on the Blue Note label, including Lovers(under his own name), and Currents, Constellations(under Nels Cline 4.) His latest with the iconic jazz label is with The Nels Cline Singers. Share The Wealth is a sprawling double LP filled with all of Cline’s musical loves, including dense experimental, fusion, funk, and forays into the avante garde. This feels like Cline’s most accessible work yet.

This time around Cline is working with an expanded version of his long-running Nels Cline Singers, which this time around includes saxophonist and punk-jazz iconoclast Skerik, keyboard marvel Brian Marsella, bass powerhouse Trevor Dunn, longtime collaborator and drummer Scott Amendola, and Brazilian percussionist Cyro Baptista. This crew have decades of musical exploration under their belts, giving this record the feel of a forward-thinking jazz supergroup. It’s stunning hearing what these musical journeymen can do, and it only goes to push the genius of this record. 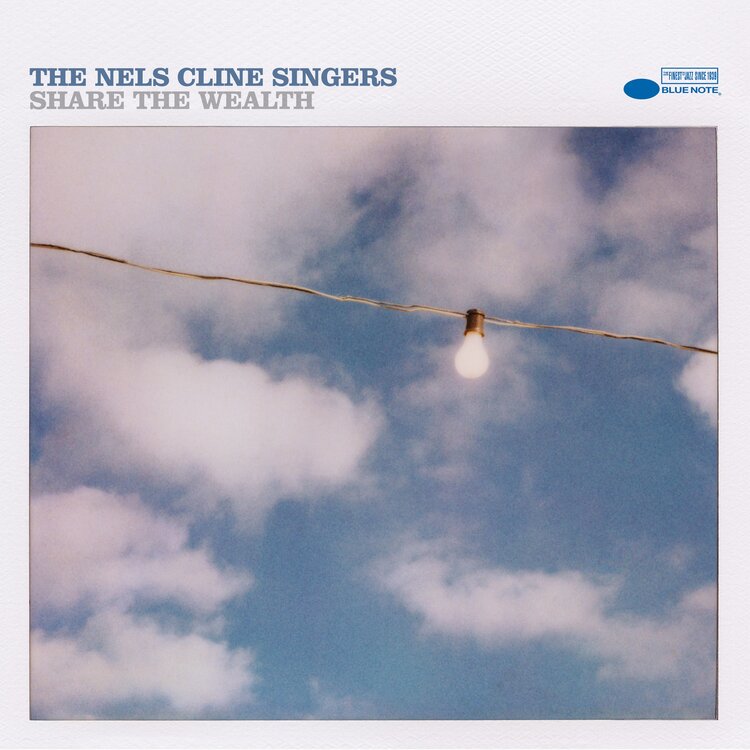 The band opens with a cover of Brazilian composer Caetano Veloso’s “Segunda”. Cline leads the way with his fluid and confident playing. It’s a low key beginning that fills the room with mystery. Echoes of Jon Abercrombie and John Scofield are in Cline’s playing here. This leads into the breathtaking “Beam/Spiral”, a sprawling 8-minute workout filled with noir shadows and subtle darkness that builds into an epic crescendo that borders on hopefulness.

The album is filled with moments of music grandeur and musical might, like the subtle and sultry “Nightstand” which brings to mind early Miles. There’s the 17-minute soundscape that is “Stump The Panel”, a plethora of otherworldly sounds and escapism that brings to mind some of Cline’s earlier work on the Cryptogramophone label. One of the surprises is the decidedly funky “Princess Phone”, which starts out in a cloud of noise and chaos but locks into a serious groove courtesy of Brian Marsella’s electric piano and Cline’s wah wah guitar riff. Early 70s Hancock vibes all around. “A Place On The Moon” is another sprawling track, this time with more ambient/post-rock vibes. Elements of Hancock’s Mwandishi live in this track, mysterious and dense. “Passed Down” closes the album with a sort of ‘quiet at sunrise’ vibe. Acoustic guitar, saxophone, and subtle percussion leads us from the sprawling world of Share The Wealth.

Nels Cline continues to astound with his musical, compositional, and band leader skills. Share The Wealth might be his best album yet.

4 thoughts on “The Nels Cline Singers : Share The Wealth”