Ryan Lee West, aka Rival Consoles, might just be one of the most exciting electronic artists working today. Too much? Okay, well in my headspace he is. I love the vastness, the melodies, and the organic nature of his work. He works like a painter, adding colors to a canvas. Not splashing and splaying broad color strokes, but carefully choosing his colors and the placement of said colors. Shapes slowly take form in his work, revealing much deeper layers upon repeated viewings. West’s last release as Rival Consoles, the excellent Persona, was one of my favorite albums from 2018. And his trilogy of releases, Sonne, Howl, and Night Melody, were an evolution of his ambient/dance floor sound into something more far-reaching and forward-thinking. And they were the stepping stones to what became his masterpiece, Persona.

West has just announced Articulation, his first Rival Consoles record in two years. From the sound of title track “Articulation” it’s still an ever-evolving and changing project. On July 31st, we’ll be able to fall into Rival Consoles world once again and have West rewire our brains.

Lead track and album centrepiece ‘Articulation’ links the record back to the analogue fluidity and colour of 2016’s Night Melody. The division of varying time signatures, intertwined with a complex structure of notes, creates an expression of a moving structure and conjures a dreamy, motorik energy.

Ryan Lee West explains, “The title track is about articulation and playfulness with shape and time. Its structure is very machine-like, but I was really interested in how melody and sense of story could develop out of this, and it became an exploration of mathematical structures — patterns and shapes having a conversation. I love that something on paper can appear rigid and calculated, but then take on new meaning based on the context that surrounds it, or how it changes over time.”

West continues, “I find electronic music is often battling to say something with integrity because technology and production can easily get in the way. I think the goal of a lot of electronic composers is to find a balance between the vision of the idea and the power of possibilities on the computer. With a pen and paper sketch you can compose and rethink ideas without technology getting in the way, so for me it acts as a very helpful tool to refresh the process.”

“Articulation” is reminiscent of what came before it, but like all Rival Consoles albums there is a movement forward. There’s a shift in the artistic paradigm. As he explains, there is a machine-like quality to the song. But it’s as if the machine is slipping in and out of our realm, creating this fluidity. Like water dripping into a vastness that is unquantifiable. And as always, West gives us melodies to lock onto that ultimately humanizes the machine. It’s a beautiful piece. 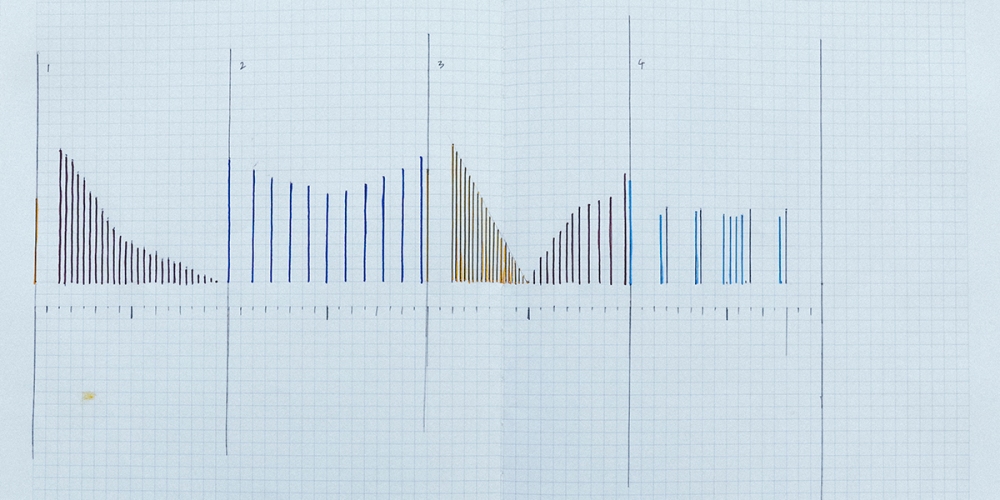 Articulation arrives July 31st. You can preorder the album now over at Rival Consoles’ Bandcamp page via Erased Tapes. Listen to the track below, and check out the video here.