I wasn’t going to do it today.

I wasn’t going to get up at the crack of dawn on one of only two days where I can sleep past 4:30 am so I could go stand outside a strip mall and hope I get some rare music nuggets after all the vultures had pulled the RSD crates of their fleshy music entrails. I’m getting too old and antisocial for freezing in early morning lines standing with strangers. Plus, I’ve got a cold and just wanted to molt under my comforter till about 9am. Turns out my wife had a meeting this morning set for 8am, and as a dutitful husband I must get up and make sure she has a proper cup of dark roast to take with her, otherwise her day just won’t be the same. And since for some Godforsaken reason I woke up promptly at 6:30am I figured what the Hell? I’ll throw some pants and a hat on and see what’s shakin’ down at Karma Records Of Warsaw.

Just so you all know, I realize living in a smallish town and only 10 minutes away from my favorite brick and mortar I have a great advantage on Record Store Day. There were some cats at Neat Neat Neat Records in Fort Wayne, IN that were in line at 3:30am. More power to you, Night Owl. I’m a sub-human until 5am, unless there’s magic waffles or a vintage Strat waiting for me in the other room. Otherwise, I’m not budging.

After the wife was properly caffeinated I slipped on my coat and headed out the door. I rolled into the parking lot around 7:25 and was shocked to see the longest line I’d seen at Karma Records on RSD. Typically when I’d roll in around this same time previously there was a line that stretched maybe 20 ft from the store. Nothing too crazy. This morning we were looking like 50 vinyl heads deep at least. I was surprised. Happy for the Karma crew, but maybe thinking I should’ve busted a groove out the door about 20 minutes early(note for next year?) Anyways, I took a swig of my dark roast and sauntered up just in time to wait in front of one of the empty storefronts.

Another guy walked up as I was and was right behind me, holding his gas station coffee and trying not to chatter his teeth like me. I figured we were gonna be there a bit so I turned to him and said, “Man, I don’t think I’ve ever stood in one of these lines and not been freezing.” He laughed and said “Yeah I know. It was like 55 degrees two days ago.” This opened the door to a fun conversation about vinyl, kids, growing up around music, strange forms of portable music playing over the years, and getting our kids into vinyl. I never caught his name, but he was from Elkhart, Indiana. The year before he’d come to my town and had hit up Bathhouse Records first(a now defunct shop that was downtown.) After Bathhouse he stopped by Karma, then Ignition Records in Goshen. He did the Northeast Indiana RSD tour. He’d told about how when he first got into vinyl his parents gave him a hard time. “Why are you getting into vinyl? They sound terrible!” He told them to come over his house so he could play some records for them on his system. He said they were floored. They couldn’t believe vinyl could sound so good. He came to the conclusion that the reason they thought vinyl sounded so bad was because they let him and his sister handle the records when they were kids, and they weren’t kind to them. The records were scratched up, they skipped, and were all sorts of bent out of shape. His parents never shared the finer points of vinyl care with him and his sis. So in light of this newfound love of vinyl, this gentleman bought his parents a new turntable last year for Christmas and they now attend record shows in South Bend with him. They swap records back and forth. They’re a multi-generational vinyl family now. I told him, “So, you got your parents OUT of vinyl. And then back INTO vinyl.” He thought that was a pretty funny observation.

It was like a feeding frenzy, man. Karma Records is a nicely laid out shop. It’s not huge, but I’ve been in record shops the size of someone’s bedroom. Karma has a nice amount of space, but this was a crowd unlike which Karma had ever seen. I made my way towards the back and it was sort of chaotic. Fortunately I saw a friendly face in Ian Skeans. Ian is a music friend of mine. Besides being known for Pink Balloon Band and Shade, Ian also plays in the Fort Wayne band Best Sleep. He’s also known to set up some pretty cool photo shoots with Star Wars Collector’s figures and shots of food(he also used to do Cozy Couch Sessions, One Minute Songs, and more things I can’t list here.) He’s super talented, let’s just put it at that. 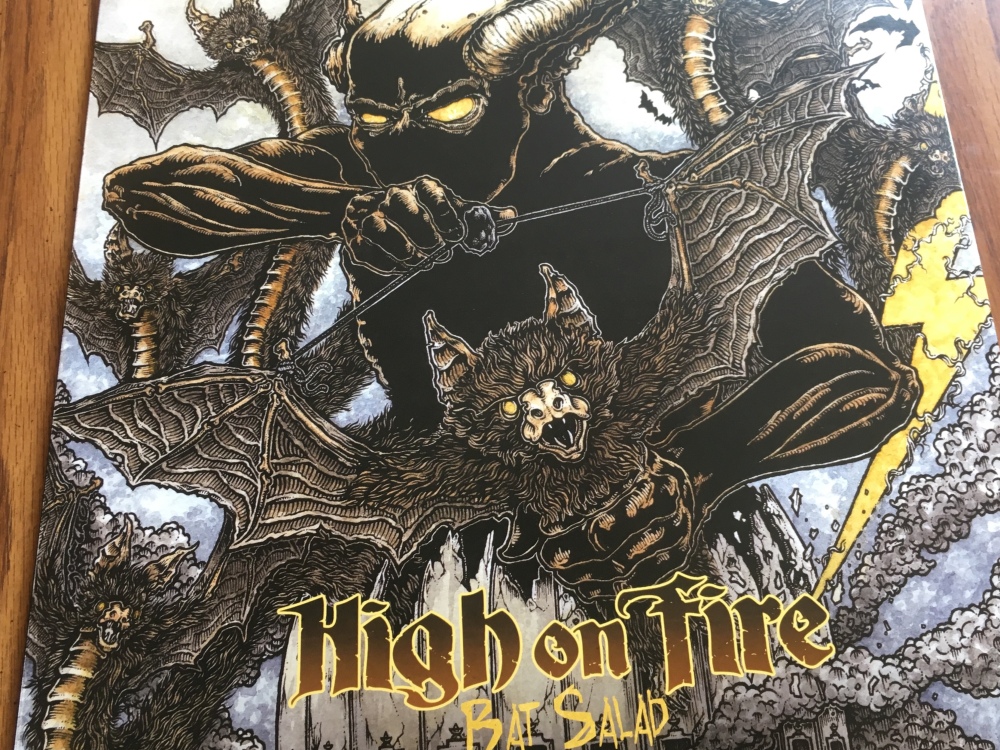 Ian and I walked amongst grabbing hands and jetting arms, getting to crates when we could. My first find was High on Fire’s 12″ single Bat Salad. It’s three unreleased tracks, one of which(title track “Bat Salad”) was written by the band, while side 2 contains two covers. Pretty much anything High on Fire I’m in, so I was stoked to grab this. I was losing hope on grabbing Deadly Avenger’s Your God Is Too Small as I saw someone walking around with a copy already and thought they might’ve only gotten one in. Fortunately Ian spied another in a crate and snagged it for me. And of course Metavari’s Absurda was also on the list which I snagged as well. 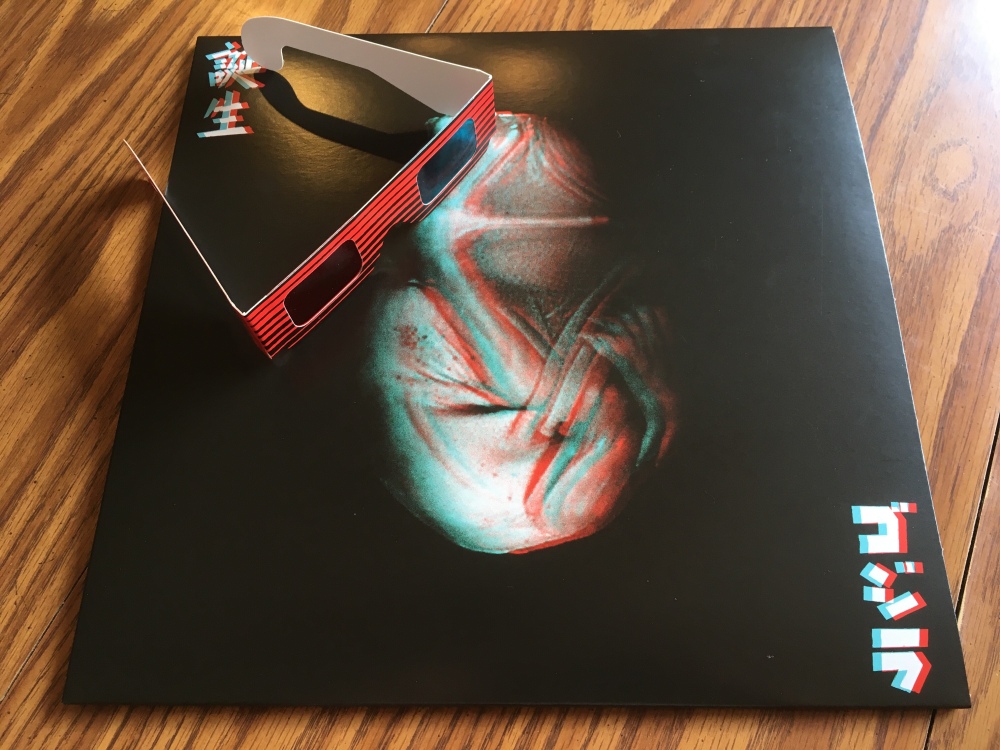 Once that initial bloody slaughter was thru we were able to breathe a bit. You could see some true camaraderie happening as vinyl head helped fellow vinyl head find that one special release they couldn’t locate in the previous 5 crates. It was heart-warming(I’m not crying. It’s allergies.) Made my way to the counter with my limited edition goodies, grabbed a donut at the door, and I was on the way home.

Each year I think I’m going to just call it quits on RSD. Not that I don’t love the artists that make these special releases, or the record store folks that put all the hard work into making something truly fun and exciting to wake up to on an early, chilly Saturday morning. No, I guess I just figure I’m celebrating all year long. I’m putting in every week with some new release from one of my favorite artists from one of my favorite independent record labels. Or I’m hitting my local shop and grabbing some used records here, some new releases there(my wife can attest to this.) I’m staying engaged with music on a daily basis. I figure what’s this one day doing for me? 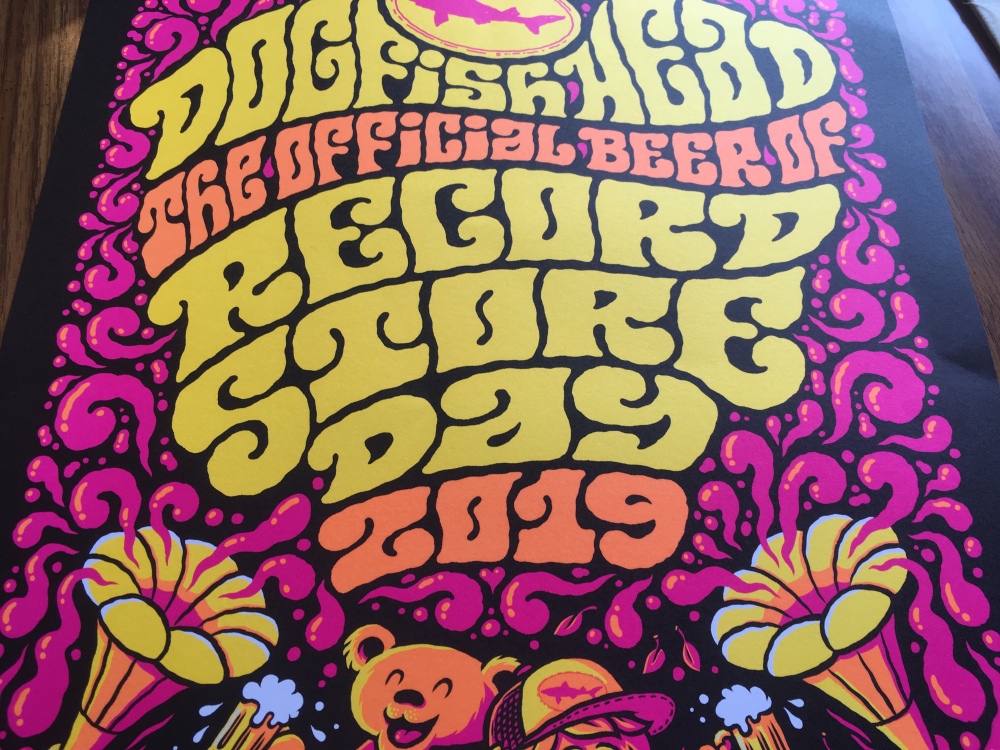 But then, I have a conversation with a complete stranger as our teeth chatter and we talk about sharing records with our kids and how we grew up around vinyl. We laugh at the absurdity of two middle-aged dudes looking like dads in a line of much younger folks with fresher hair cuts and skinnier jeans and we realize we don’t care. We may be old, but we’re not out of the game. We’ve got a cup of coffee and a friendly stranger to pass the time with till the doors open and the hunt begins.

5 thoughts on “Standing In The Cold With Strangers(RSD Chronicles Part Who Cares?)”