I’ve had those nights.

Those nights where you head down into that darkened basement studio with a pal, and a few too many beers, and decide to hit record and see what happens. Amps buzzing, basses bruising, and drums beaten to within an inch of their lives. Everything in that recording space is electric, man. You go into a place where it’s just you and the instrument, the universe allowing the space and time to explore sonically and creatively. There’s no set time frame or even a destination, other than to end up with something you feel is a musical statement on that conversation one has with the cosmos. That conversation you can only have after the chi is properly oiled with just the right ABV% and those in the room have opened their minds as well to whatever voodoo you’re dishing out.

I’ve had those nights and they are incredibly special. I wouldn’t trade those creative freakouts for anything. Of course, the next day when I hit play on those sessions they sound nothing like Mythic Sunship’s epic and mind-expanding Another Shape of Psychedelic Music. What me and my buddy created was, at the most, a couple Midwest cats version of an unsteady motorik beat, some feedback, and repetitive swells of drunken anarchy. What Mythic Sunship created, along with saxophonist Søren Skov and some guest guitar work from Causa Sui’s Jonas Munk, is a cosmic blend of Coltrane’s openness to letting the universe kiss his soaring sound canvases, as well as the communal rock spirit of Can, Popol Vuh, and Black Sabbath. This is a loud, expansive, dense, and skull-crushing ode to hitting record and letting the universe take you where it may. It’s a glorious ride.

If you’re at all familiar with the boys in Mythic Sunship then you know they don’t swing their hammer gently. They use a kind of brute force meant to leave a mark(and blow an eardrum.) But what they do isn’t without purpose. They grind out massive riffs and tribal beats like a soundtrack to the apocalypse. The idea of them going all modal jazz and improvisational doom rock with a saxophonist and Jonas Munk along for the ride seems exciting, but seeing such a creative exposition come into reality is something wholly different. That’s exactly what happened though when Mythic Sunship, Søren Skov, and Jonas Munk gathered at Munk’s home studio and hit record to create a “smoky haze of cosmic krautrock, stoner, doom, heavy psych, modal jazz and even drifts into afrobeat!” What emerged from this rock and roll cocoon is the mammoth double LP Another Shape of Psychedelic Music and it is just that. This is psychedelic music unlike you’ve heard before. It’s a bruising 76 minutes of sax squall, guitar grind, and Sabbath-ian drum abuse that if you let it becomes almost transcendent in its free form rock strutting. 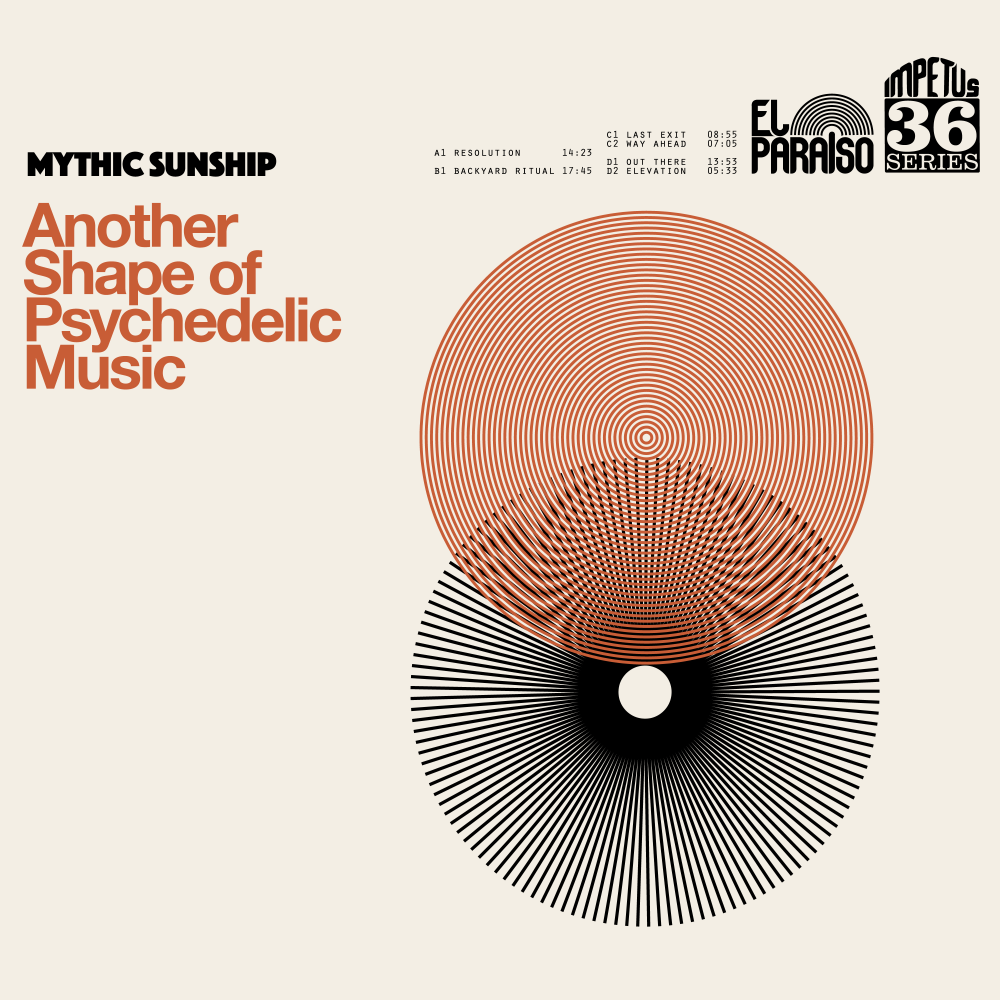 Going from song to song doesn’t give this record justice in trying to break it down. Much like studying something like Miles’ Panagea, Can’s Tago Mago, or Coltrane’s A Love Supreme, Mythic Sunship’s newest is better digested as a whole(the Tweet, Snapchat, and iTunes singles folks may have a hard time sitting still for 76 minutes, so maybe this isn’t for you.) There really is nothing like the journey, and Another Shape of Psychedelic Music is a journey.

Dropping the needle on the expansive and epic album opener “Resolution” is very much like opening to the first page of an epic tale. Skov’s sax is accompanied by bass, which then builds over the course of nearly 15 minutes. It’s elegant in its build and structure, while still retaining a “wild blue yonder” spirit. It’s like Coltrane going post-rock. Then you step into the jungle groove of “Backyard Ritual”, which is one of two songs here that Munk joins Sunship on guitar. Even if you didn’t know the Causa Sui guitarist was on this track, you definitely get a Return To Sky vibe with this, the longest and strongest expanse of music here. All the elements arrive at the perfect point seamlessly here. Imagine Bitches Brew somehow sonically colliding with Sabbath’s Vol. 4 and you’ve got an idea of the epic shit going down here. Rounding up, “Backyard Ritual” clocks in at 18 minutes. This is what album side jams and smokes on the porch were created for. Just perfect.

Elsewhere, “Last Exit” sounds like Colin Stetson sitting in on a Lightning Bolt session while “Way Ahead” has a bluesier soul to it. “Voodoo Chile” set on a course for the heart of the sun, baby. Swinging psych with a touch of cosmic space dust. “Out There” is just pure guitar heaven, man. That three-guitar attack is front and center here. The rhythm section here keeps things firmly grounded, which allows the guitars to soar into the stratosphere. “Elevation” raises us into some existential cloud reserved for higher thinking. It’s a slow churn of guitar, bass, drums, and saxophone that feels like looking over the embers of some kind of slow burn destruction. Much like the scorched earth vibe of their other 2018 release, the excellent Upheaval, Mythic Sunship here settle into the ashes created by the fire of this recording session. Mythic Sunship came to blow minds. Mission accomplished.

There aren’t too many albums being made like Another Shape of Psychedelic Music. There’s too much emphasis on satisfying the ADHD mind these days. Nobody seems to want to take the time and explore anymore in the studio. Cats like Kamasi Washington, Sleep, Carlton Melton, Causa Sui and Eternal Tapestry are still interested in exploring when the record button is hit.

So are Mythic Sunship.

Another Shape of Psychedelic Music is a testament to the joy of musical exploration, improvisation, and free form mind expanding.

Hit play and settle in.

2 thoughts on “Mythic Sunship : Another Shape of Psychedelic Music”