The music of Graham Reznick is hard to pin down. As you listen to his electro-funk grooves you feel as if you’re hearing something strangely familiar one second, then the next it’s as if you’re getting transmissions from some alternate universe where 1980s electro pop is being translated by artificial intelligence. Reznick isn’t settling for some sort of retro trip. He seems to be digging deep into his own 80s musical childhood trauma and searching for sounds and feels that scored a neon youth where the lights flickered and waned more than they were brightly lit.

Graham Reznick released his excellent debut Glass Angles with Death Waltz Originals earlier this year. That album, a sort of “through the looking glass” noir-ish musical tale of nighttime Los Angeles was a brooding, psychedelic electronic record filled with kaleidoscopic soundscapes that were like musical Rorschach paintings. The more you listened to the songs the stranger and darker they seemed, morphing into some other state of mind. At the time of its release there were rumors that Reznick had yet another album ready to go, but this time with Burning Witches Records. Graham had a track on the BWR Record Store Day compilation called “Faking Point” which echoed the sonic delights found on Glass Angles, but there was something darker and more synthetic about it. 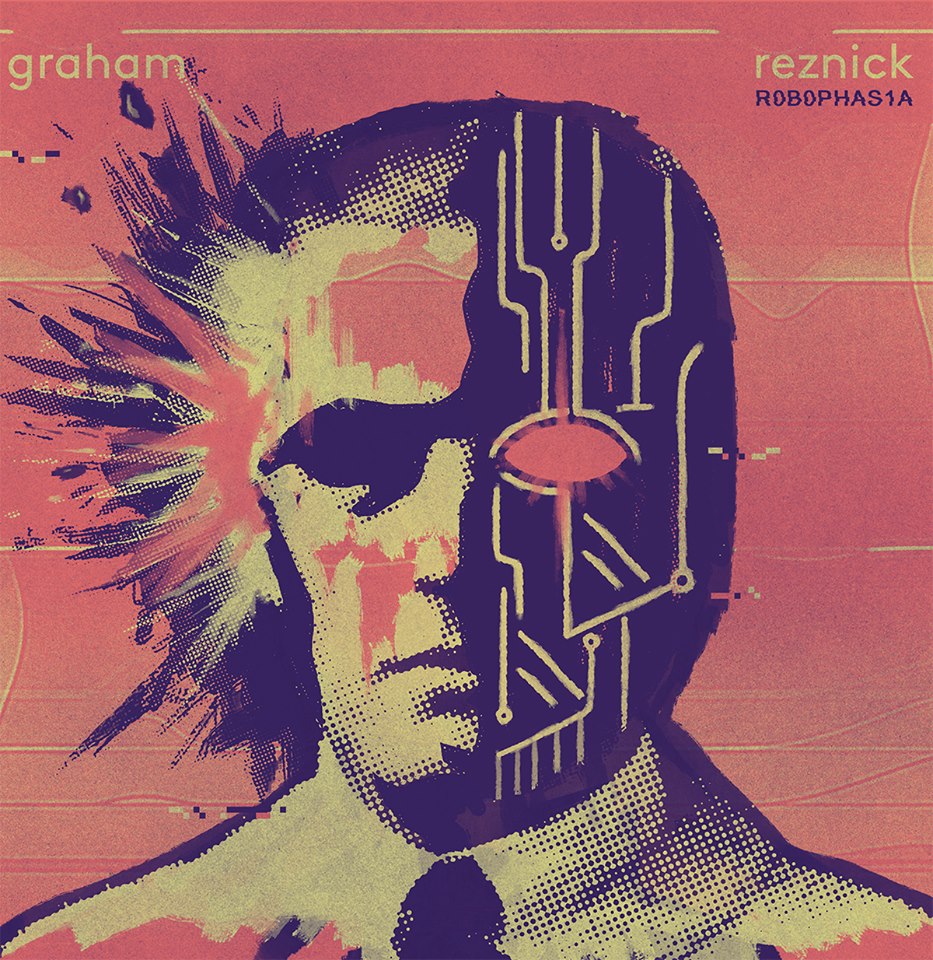 Well we’re nearly to July and Reznick and Burning Witches are making good on those album promises. Robophasia shows another side to Reznick’s musical proclivities. This album seems simpler at first, yet with each listen it gets more complicated and dense. Reznick’s engineering and mixing prowess come into full effect here, giving the ears and brains a workout of sorts. It’s alien and intoxicating in the best way possible.

The first thing that makes itself known on this record is rhythm. Even with Angles, Graham Reznick showed a tendency to create these heady rhythmic, groove-inflected tracks. Robotic beats that sound as if they’re being transmitted from 1983. At first listen you may not hear it, but there’s a precision in those beats. There’s a purpose with every snare hit and bass kick. Take opening track “Robophasia”, it sounds as if Harold Faltmeyer had his way with a Rockwell track. Wonky synths sound as if they’re humming the melody as robotic voices belch and groan along. It’s alien, but intoxicating. “Unsoled” is an electric piano-driven track. It almost has a pop feel to it; very much on the cusp of opening credit scene material here. Reznick knows how to create mood and he does that to great effect here. It’s no surprise sound design is Reznick’s day job. “Atomatics” is where we step into some other dimension. Full-on A.I. electro freakout. Do yourself a favor and listen to this with headphones on. You will feel like you’re tripping, no psychedelics needed.

I can remember staying up late at night when I was a little kid and watching MTV in the summer. Late at night was when you’d see the good stuff, and that’s when I first saw Herbie Hancock’s “Rock It” video. That song and video kind of freaked me out, but in a good way. I don’t know whether Reznick was affected by that record as well(consciously or subconsciously), but I get that Future Shock vibe with this album. Odd electronic records that towed the line between arty, experimental, and pop like Future Shock, Tom Tom Club, Somebody’s Watching Me and even early hip hop all permeate this album. Wonky beats and vocodered, robotic vocals give this album a feeling of some strange cyberpunk tale put to music.

“The Score” echoes darker electro funk, while “Quotient” moves along with a heavy groove and is reminiscent of some of those Tandy Deskmate experiments on Ben Zimmerman’s The Baltika Years.  “YKWYA” is lighter fare, almost coming off as breezy in comparison to what came before it. I can imagine some dark and glowing arcade perched in the middle of a mall as I hear this song. “Rope” is groovy and mysterious, while “Mysterious Fire” is a delicacy of precise sonics and sound construction. “Mr. Sidewalk” closes Robophasia with a bit of that neon noir vibe we heard from Reznick earlier this year, but with a touch of robotic vocalizing for good measure.

Robophasia feels like the stranger, smarter brother to Glass Angles. It sounds deceptively simple on first listen, but each time you hit play on it there’s something new revealed. Something just around the corner you weren’t expecting but are delighted to see. Graham Reznick is proving to be one of the musical highlights of 2018. He showed his talent for constructing intricately-woven music with Glass Angles, and weaving them together for an exhilarating musical narrative. Robophasia continues that trend, even moving to another level.