I don’t think there’s any other band that was as prolific as Tangerine Dream. In the 70s and 80s they were dropping albums once or twice a year. Once they started doing film scores that rate of creativity and productivity increased even more. Edgar Froese and whomever was in the band with him at the time were constantly moving forward, adapting with the times(at least through the 80s.) I have these vague memories of being a kid and having this fascination with the name “Tangerine Dream”. The name evoked so many things in my childhood noggin. Something like this colorful, sweet flavor mixed with semi-consciousness. It was both mysterious and inviting.

I think the first time I actually saw the name Tangerine Dream was when I watched Firestarter for the first time. Drew Barrymore was intriguing, Keith David was a solid dad with telekinetic abilities, and George C. Scott was scary as hell. The music was this hazy calm in a sea of frightening powers and disturbing scenes. In retrospect the movie was pretty terrible, but the music was and still is amazing. It wasn’t until many years later that I bought my first Tangerine Dream LP. It was Tangram and I found it for the low, low price of $1.00. If it hadn’t been that cheap I probably wouldn’t have bought it(sorry Edgar.) Glad I did, though. I ended up loving it and it began my love of all things Tangerine Dream.

I hit up most of the mid to late 70s stuff, and the soundtrack stuff as well. I need to hit up Alpha Centauri and Zeit soon, but on a recent trip to Half Price Books I found an excellent copy of 1981s Exit. Tangerine Dream have once again grabbed my attention and adoration. 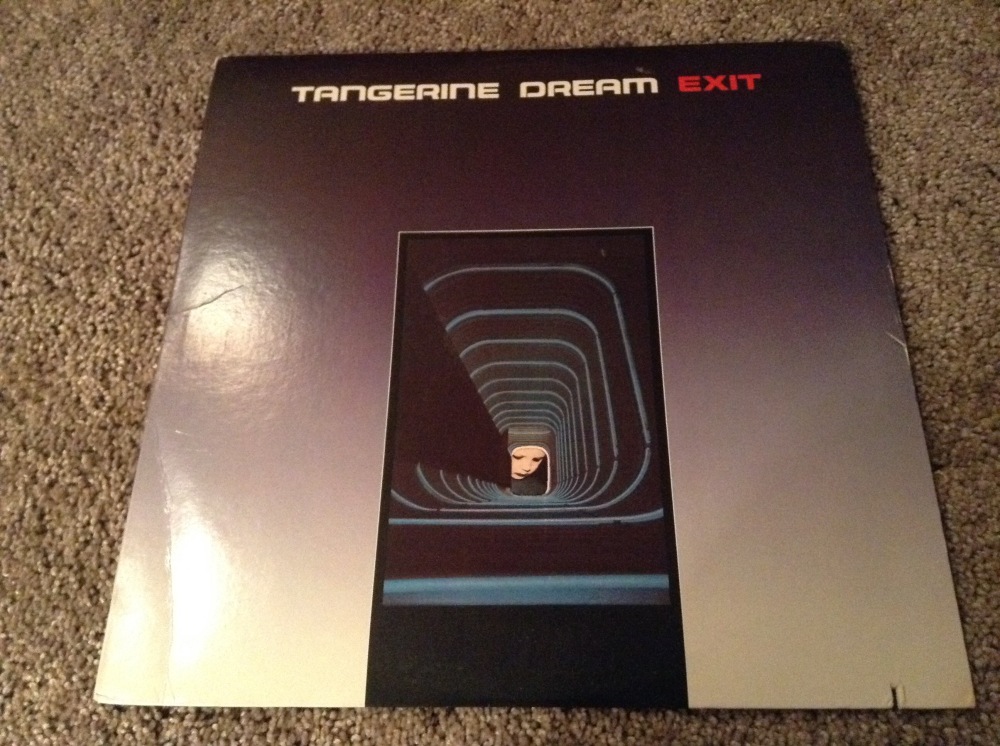 Like I said, Exit came out in 1981. They had done the score to Michael Mann’s Thief the same year so they were riding high from that exquisite piece of synth heaven. Exit is decidedly more low key than Thief. There’s a darkness on this record not heard since their work on the Sorcerer S/T. It seems to be a warning kind of album. A plea for the world to get its head out of its ass. This record is just as relevant now than it was then, me thinks.

First track “Kiew Mission” is a slow burner that has one of the few vocal tracks featured on a Tangerine Dream record. An uncredited Berlin actress chants in Russian the names of the continents of the world. It’s a protest song of sorts, as we were in the throes of a pissing match with Russia and the possibility of nuclear war was frighteningly just around the corner. For an album in Tangerine Dream’s 80s collection it’s a very sobering opener.

“Pilots of Purple Twilight” is a little more upfront but still carries with it an air of trepidation. It’s most definitely an “80s feel” kind of track, with Edgar Froese, Christopher Franke, and Johannes Schmoelling digging deep into the sound of the neon decade. It’s reminiscent of Tangram, and really foreshadows the sounds rock bands like Rush and Van Halen would pepper their future records with.

Speaking of sounds, I must share the equipment used on this album. The synths here are like the color palate of a painter. They make up what the record ultimately becomes. On Exit, the following equipment was used:

“Chronozon” reminds me of the opening music to some early 80s post-apocalyptic movie. You can see the protagonist driving down dusty open roads in a ’72 Nova with sheet metal attached to it and a flames coming out of the exhaust. Dilapidated vehicles and burnt out buildings pepper the side of the road as a glowing, orange sun drops into the horizon in front of him. As the song plays you can just tell this guy is going to have some great, dystopian adventures with scantily clad she-warriors and kick some serious mutant ass. At least, that’s what I see when I hear this song. Apparently it was used as the opening music for a Hungarian political show called Panorma. Who knew?

Title track “Exit” is glorious in its mournful, analog buzz. It feels like a title track. Le Matos captured this kind of magic with their Turbo Kid S/T. For my money this is where Tangerine Dream are best, wrapped inside a dense, heady melodic piece of music like this. Froese is the master of mood and this track proves that. A little side note about the song, it was used in episode 6 of Stranger Things. It’s okay, I’ll wait while you go cue it up and check it out…..Yes, episode 6……Cool, huh?

“Network 23” sports some four on the floor rhythms and wavering, hypnotic synths that lay in the air just out of reach. Strangely enough, this track sounds like Kraftwerk doing the theme for Law and Order(having just typed that I really want to hear Popol Vuh do the theme music for Barney Miller.) Anyways, this one a great, driving Berlin School slow burner.

“Remote Viewing” is classic Tangerine Dream, regardless of the decade. It’s ghostly and dark, with an almost space western vibe. Sinoia Caves has pulled these vibes for inspiration for sure, as this sound is all over the Beyond The Black Rainbow S/T. Endless black space permeates the song throughout it’s 8 minute time span. Froese, Franke, and Schmoelling let their Komische flags fly high on this excellent album closer. 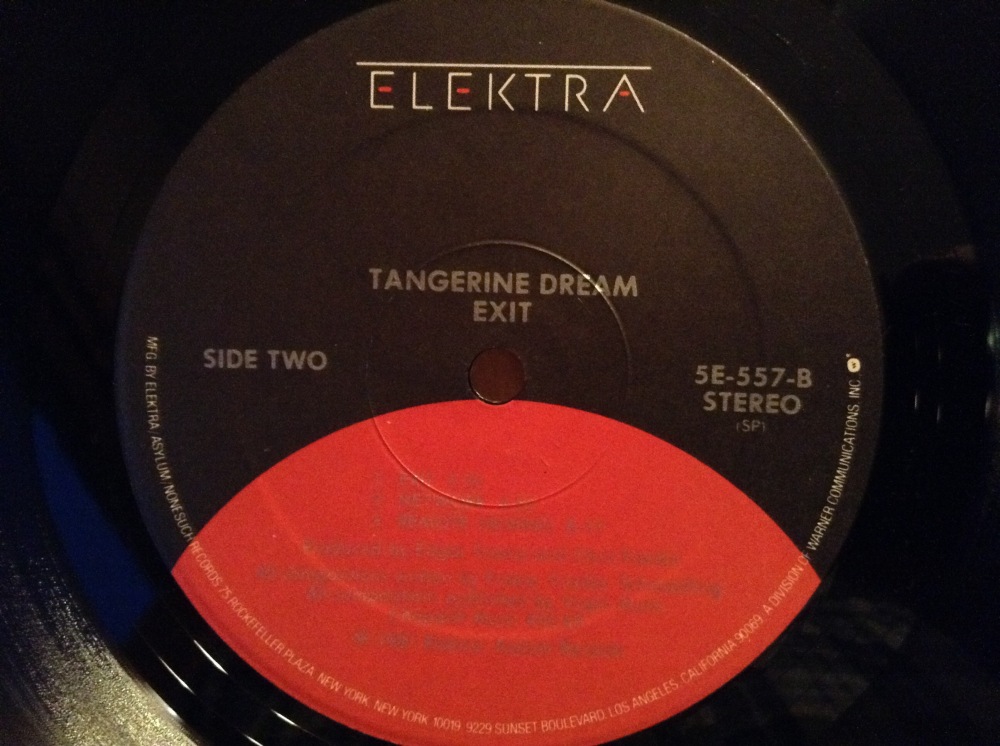 It took me years to find my way to Tangerine Dream. Like, REALLY find my way to them. They were in my peripherals even as a kid(Firestarter, Legend, Near Dark, Three O’Clock High), but it’s only been the last 8 years or so that I’ve found that real connection with them. It’s like a Vulcan mind meld going on between me and the old TD. I adore the classics like Phaedra, Rubycon, Ricochet, Stratosfear, and Cyclone, but I also like these little records. Albums like Tangram, Le Parc, White Eagle, and of course Exit. They’re like these bite size versions of epic. They show that Tangerine Dream can write a concise, on-point piece of music without using up a whole album side(nothing wrong with that, though.) Exit is turning into one of my favorites.