Just when you think you’ve got the year in music all wrapped up with a nice, decorative bow an album pops out from the great ether and grabs you by the lapels and 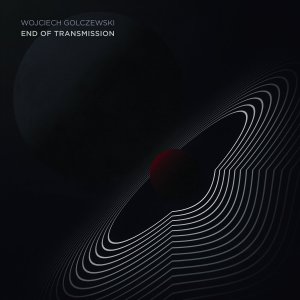 says “You’re not done yet, pal!” That album for me is Wojciech Golczewski’s End Of Transmission. Golczewski is a film composer that also likes to put out music under his own name that’s heavily influenced by older synth music. Earlier this year he released his debut album Reality Check and it was an incredible science fiction-inspired collection of songs that could’ve been the score to some long lost space epic. It had all the bells and whistles. But now Golczewski has gone back into recording mode with nothing more than a miniMoog and a recorder. The results feel primitive yet warm. It’s a visceral listen that harkens back to both early 70s synth pioneers and the primitive scores to those cult sci-fi flicks of yesteryear.

End Of Transmission is a relatively quick listen, with just 7 tracks that all but one are around the 2 to 3 minute mark. With analog synths there’s not much subtlety in the sound. It’s big and brash at times, but they’re also so much more emotive and present than they’re digital counterparts. There’s an organic quality to the instrument and the 7 musical movements collected here feel as if they’re telling a story. Space exploration, time/space journeys, and life forms from other dimensions could all be soundtracked to these songs. The songs, simply title “Transmission 01” through “Transmission 07”, flow nicely into each other. If you’re familiar with Wendy Carlos, Morton Subotnick, Jean Michel Jarre, Klaus Schulze, and even John Carpenter’s earlier film work then you’ll feel right at home in this musical world. While Golczewski definitely brings up visions of other worlds, space travel, and existential ponderings with his synthesizer compositions, these musical pieces also bring to mind early video game music. “Transmission 06” sounds like early Konami; in particular the classic Castlevania for the NES. I sat listening to this record with my son and I just wanted to break out the old console and play. “Transmission 07” also brings to mind some video game vibes. There’s a hint of Disasterpeace’s Fez S/T in there, which warms this middle-aged heart.

Wojciech Golczewski has a knack for creating real emotions and visceral musical experiences through his compositions. Reality Check was his big screen sound, while End Of Transmission is his late night rental cult score. These are mini revelations that get the synapses firing and take you on a journey that leaving the house isn’t required for.

Hey, all you vinyl heads. There’s like 26 copies of this left out of 400 pressed on vinyl. Once they’re gone they’re gone. You could probably snag a copy off Discogs for $70 or $80, but why do that when you can still get a copy for $15? Grab one while you still can. It sounds AMAZING on vinyl. 45RPM, heavy duty vinyl, pretty black sleeve to stare at while you zone out? Do it!