When Panos Cosmatos’ film Mandy was announced there was an instant buzz around the second film by the Canadian filmmaker. His 2010 low budget sci fi fever dream Beyond The Black Rainbow had built itself quite a cult following due to the film’s retro-futuristic look, new age nightmare storyline, and of course the incredible score by Sinoia Caves. When Cosmatos makes a film, he makes sure every aspect of it works to make it an all-encompassing experience. To a certain degree the story comes second to aesthetic, as the visual and score are what pull you in.

So when it was announced that along with the always engaging(and sometimes preposterous) Nicholas Cage would be starring in Mandy, Icelandic composer Johann Johannsson would be writing the score for the film. Of course, it was announced Johannsson wrote the score after his untimely death in February of 2018, so the arrival of Mandy would be a bittersweet one.

Johannsson had become one of the most engaging and sought after film composers over the last few years, creating engaging scores for films like Prisoners, Sicario, Arrival, The Theory of Everything, and was a music and sound consultant for Darren Aronofsky’s Mother!, to which there was little to no music. Besides his film work, Johann was always writing original works as well. He put out albums of original music for Deutsche Grammophon, and was in bands in the 90s as well.

So with the release of Mandy comes one of the final works of Icelandic composer Johann Johannsson. Is it a worthy swan song to such an incredible composer? The answer is absolutely, and then some. 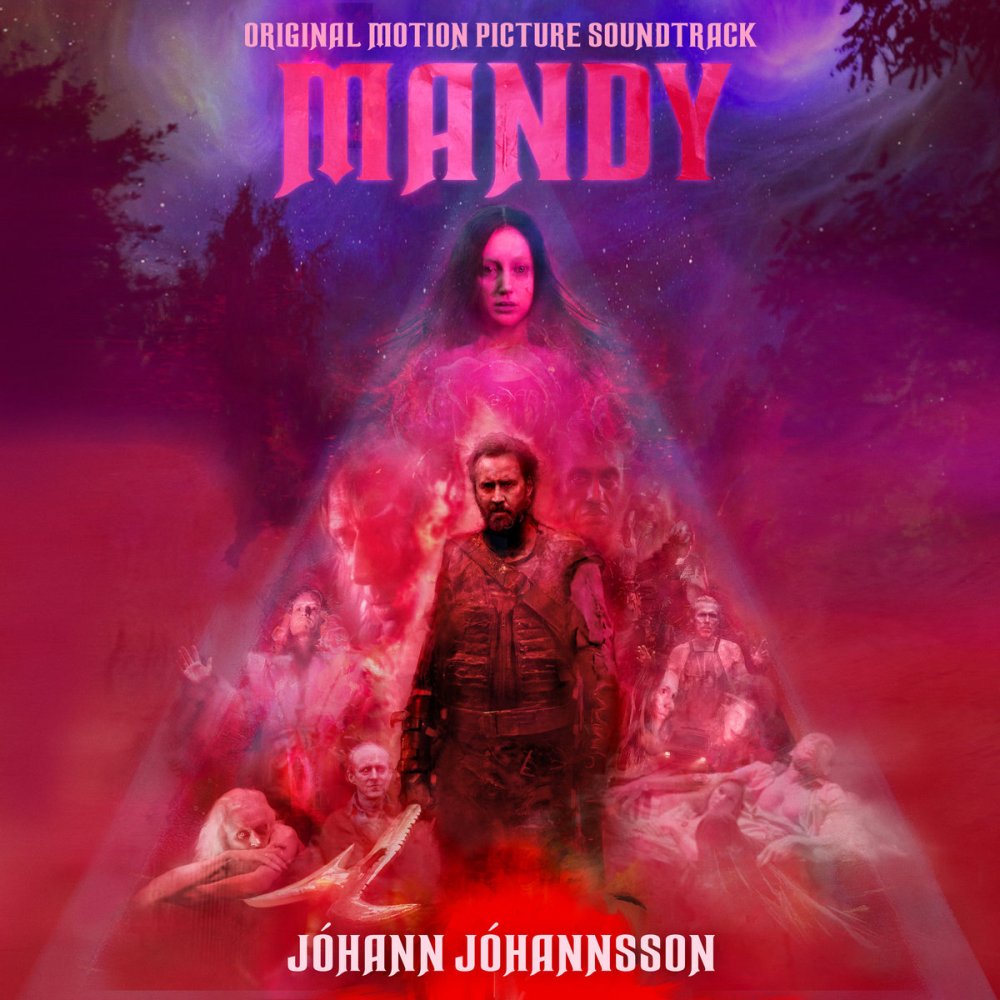 For those who dont’ know about the movie, it takes place in 1983 and involves Cage’s Red, a logger, and his girlfriend Mandy. They live a quiet life in a cabin in the woods until one day a cult leader spies Mandy walking home from work one day and decides she should belong to him. Demonic bikers are summoned, tragedy ensues, and the film becomes a psychotronic nightmare bloodbath. It lives up to the expectations that Beyond The Black Rainbow built and then some, and Cage gives one of his most engaging performances.

The score by Johannsson builds on menacing swells of synths, distorted guitars, and apocalyptic drums. The score he wrote for Cosmatos’ retro-futuristic revenge flick encompasses both the rage and the sadness of Cage’s Red. He seems like a man with a turbulent past who found someone to calm the storm within him. Mandy centers the once out-of-control Red, and without her he’s a rudderless man. When he loses her in such a violent way, he himself nearly killed, that center and calm is gone. All that is left is a blind rage that can only be tempered with taking out everyone involved in the tragedy. Johann Johannsson’s score embodies the rage, building walls of doom and cascading turmoil thru both electronic noise and 70s progressive rock tropes. As the film progresses, so does the scenery from rustic Pacific Northwest to something out of a post-apocalyptic film; River’s Edge-meets-Mad Max-meets-Beastmaster. Johannsson adjusts the mood accordingly.

From the foreboding of “Starling” to the serene and lovely “Mandy Love Theme” to the synth-heavy rocker “Children of the New Dawn”, Johannsson and his select crew of talented musicians, collaborators, and curators both before and after his death build a listening experience that stands as both another character in the film, and also as a standalone record that as its own listening experience is riveting and all-encompassing. This album goes from doom to melancholy at nearly every turn.

Johann Johannsson’s death early this year remains an absolute tragedy and a huge loss for both the film and music community. Rarely do we find such incredible talent and such a unique musical voice. We have his music to remind us of that talent, and Mandy is one of his finest and most unique musical moments.