When I think of Oklahoma I think of rodeos, fracking, Oklahoma! ranchers, and the Flaming Lips. Yes my view of Oklahoma is limited by ignorance, but after hearing The Soft Bulletin there wasn’t much else I needed to know. I was good. But then I hear this song called “Candle Wax” on Burning Witches Records’ Communion compilation for this year’s Record Store Day and my eschewed view of Oklahoma has changed slightly. “Candle Wax” was the work of a band called Harglow, which started as a duo from OKC but is now half in OKC and half in Austin, TX.

The mysterious duo known as Harglow is Colin Nance and Eric Gorman. While the music is blood-drenced and brooding, these guys are actually affable dudes that love to geek out about horror films(yeah, just like me.) I was able to throw a few questions at these two and they were more than happy to throw a few responses back.

J. Hubner: Tell me about Harglow. Where are you guys from? How did the band get together?

Colin: We met on OccultSingles.com. You know, the leading Black Magick dating site in the world!

Colin: Seriously though, we both grew up in the Oklahoma City metro area. We conceived the project about 3 years ago and then I relocated to Austin about a year later. That began a satellite type of musical relationship. Sending files back and forth. Slowly but surely building our sound, conjuring evil and eventually a record.

J. Hubner: For the uninitiated, how you describe Harglow’s sound? What sort of sounds did you two bond over that helped mold Harglow’s vibe?

Colin: I like to describe it as the soundtrack to some esoteric vhs, in black and white, that you find in an abandoned basement. On that tape is a collage of occult rituals, sacrifices, and other questionable/dark imagery. The music at times felt like it was being summoned as we recorded it. It’s at times very visceral and hard hitting. Then it can be very quiet and bring whole other level of unsettling feelings. It’s very dynamic.

Eric: With Harglow, I think we really bonded over movie scores, usually horror movie scores. From there, Colin turned me on to a lot of artists like Umberto, Carpenter Brut, and Haxan Cloak, etc. Artists that were making this darker music that shared that same kind of spooky esthetic. It opened the flood gates for me.  Now, were always kind of on the lookout for new stuff to show each other. 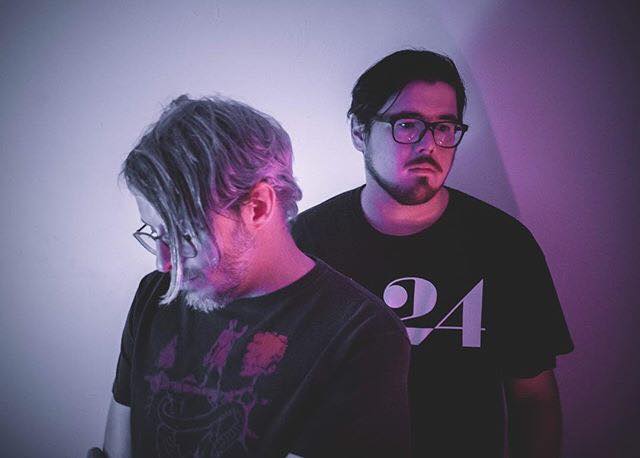 J. Hubner: There is definitely a horror/Gothic vibe to your sound. You mentioned horror scores as something you two bonded over. So horror cinema obviously plays into the whole vibe of your work. Who are some inspirations in horror cinema?

Colin: We are quite huge fans of cinema and I say films play a huge role in our sound. Especially the genres mentioned. Horror was a huge bonding medium for us. It really is our happy place. I personally am a huge fan of directors like Dario Argento, Panos Cosmatos, David Cronenberg, Joe Dante, Alex Garland, John Carpenter, David Fincher, Ridley Scott, Terrence Malick, Danny Boyle and Wes Craven. As far as films that inspire me musically, I always find that I lean towards more metaphysical/visual styles. I love and am inspired by movies like Suspiria, Beyond the Black Rainbow, Halloween and Halloween III, Begotten, It Follows, Sunshine, The Witch, and most recently Annihilation.

Eric: Yep to all of what he just said. We are both unbelievably large horror nerds.  Personally, I also think we pull a lot of inspiration from stuff like the score for the Texas Chain Saw Massacre by Wayne Bell and Tobe Hooper or The VVitch by Mark Korven.  These scores that really cross the lines between score and sound design, and make you feel incredibly uncomfortable. I wanted to try and make something that filled me with the same type of dread.

J. Hubner: Harglow was featured on Burning Witches Records’ RSD release ‘Communion’. How did you guys get hooked up with Gary and Darren? You were among some pretty great company.

Colin: We sure were among great company. It was quite an honor to be included alongside some of our biggest inspirations. We were huge fans of the label from its conception. All Them Witches’ first record The Coven was what initially got my attention and pinged my radar as far as becoming aware of the label. Every record after that was an instant attraction. We just reached out to them and sent some tracks their way to see if they liked what we were doing. To our surprise they did and everything fell into place from there.

J. Hubner: I loved your track “Candle Wax”. It’s definitely more in line with harder industrial stuff from the 80s, as opposed to the synth-heavy soundtrack stuff. How do you approach songwriting within Harglow? Maybe walk me through the process of putting “Candle Wax” together.

Colin: We tend to either start our writing/recording process rhythmically or by building a sonic palette of ambience/field recordings and going from there. I feel like a lot of focus goes into the textures and sound design before setting sights on melody. With Candle Wax, that song started with the drums and the bass synth. We knew we wanted that particular track to be quite violent, gritty, and rhythm oriented. When the BWR gents approached us about contributing to the project, I believe their words were “We want blood on the walls!” So that was the tone and foundation we were after.

J. Hubner: Had you guys released any music prior to “Candle Wax” and the ‘Communion’ compilation? Or was this the band’s debut?

Colin: This is our debut. The madness has begun.

J. Hubner: You guys have a record coming out with Burning Witches. Can you tell me a little about it? Is it in the vein of “Candle Wax”? Did you guys self-produce it? Do you record at a home studio? What can we expect from this record?

Colin: We do. It was self-produced, recorded, and mixed by us in my home studio. It was mastered by BurningTapes. Also, the artwork is going to be quite immaculate. We tapped the very talented Ben Turner and he knocked it out of the park. The sound is definitely in the vein of Candle Wax, but it does get a bit atmospheric/soundtrack-like at points as well. Like I said, we focused on it being very dynamic. It knocks out your teeth. It bubbles and pulses. It wraps around you like fog in the night. It’s a journey through the darkest reaches. Those that make it through to the other side are then the initiated.

J. Hubner: I know this is a bit off subject, but what was the last great book you read?

Colin: I just got done reading Stephen King’s IT and Erik Larson’s The Devil and the White City. Both were quite incredible in their own way. One was fictional horror and the other was real horror. I recommend both if you’re into true crime/history and horror/fantasy.

Eric: I started reading Stephen King when I was really young. Probably too young. I read IT for the first time the summer when I was nine years old. I think his books are a huge reason I have a proclivity for the darker side of things.  The last really good book I read was NOS4A2 by Joe Hill. I really enjoyed the way that story unfolded! Dr. Sleep by Stephen King also really resonated with me and gave me the creeps. It made me look at vacationers in RVs in a whole new light. I think that’s the best thing about his work. It captures the horror under the surface. Like a blood splatter on a white picket fence.

J. Hubner: What are your hopes for Harglow? Would you ever consider film scores, or do you want to just keep developing the sound you’ve started and continue making original music?

Colin: At this point we are just going with the flow. One step at a time. Going to release this first record and go from there. We would absolutely LOVE to get into the world of film scores if the right opportunity presents itself. That would be a dream come true. Having BWR release our first record is another dream come true.

Eric: I couldn’t agree more. I feel a bit like Jonathan Harker in a stage coach barreling down the Carpathian mountains. It’s been a crazy ride so far, and I’m excited for whatever comes next.

You’ll want to keep up with Harglow. How? Well you can follow them on Facebook right here, and you can keep up with all their bloodlettings and occult activities on Instagram as well. And if you haven’t already, you should definitely download that Communion compilation. What the hell have you been waiting on?