Oh, the 80s. When men were men in tights and poofy hair. The guitar’s smooth lines turned jagged and their colors went from sunbursts and cherry red to hot pink and black with skull and crossbones. Some see these as dark times for hard rock and heavy metal. While it’s not a decade I revisit often in regards to my musical fixes, there are some musical treasures that call their home the Reagan years.

By the mid-80s I was well into elementary school and deep into a nasty Star Wars habit that was slowly turning into a Transformers and GI Joe addiction. To complicate matters I was also starting to dabble in collecting music. Cassettes, folks. This was before CDs were prominent and affordable and just when LPs had begun to lose their desirability to the convenience and compact size of the cassette tape. My brother had been buying cassettes and LPs for some time and he’d begun dubbing some of the cassettes for me to enjoy on my General Electric single deck “boombox”. The first W.A.S.P. album, Nazareth’s Hair of the Dog, Judas Priest’s Defenders of the Faith, and The Beatles’ Magical Mystery Tour were a few he put on some Maxell 90 minute tapes and threw my way. The first cassette I bought for myself was when I was 10 and in the 5th grade. It was Ratt’s Out of the Cellar. After seeing their video for “Round and Round” on Friday Night Videos I was completely in awe of these LA glam rockers. Twisted Sister’s Stay Hungry followed shortly after, along with Quiet Riot’s Condition Critical and Van Halen’s 1984. I was officially hooked. Music had become as important as the new Kenner or Hasbro toy. Once the toy thing would die out I would then make music my main focus. It felt pretty natural, really. My parents groomed my brother and I at an early age to be music fans. There were ample LPs in the house growing up, so music was always around. 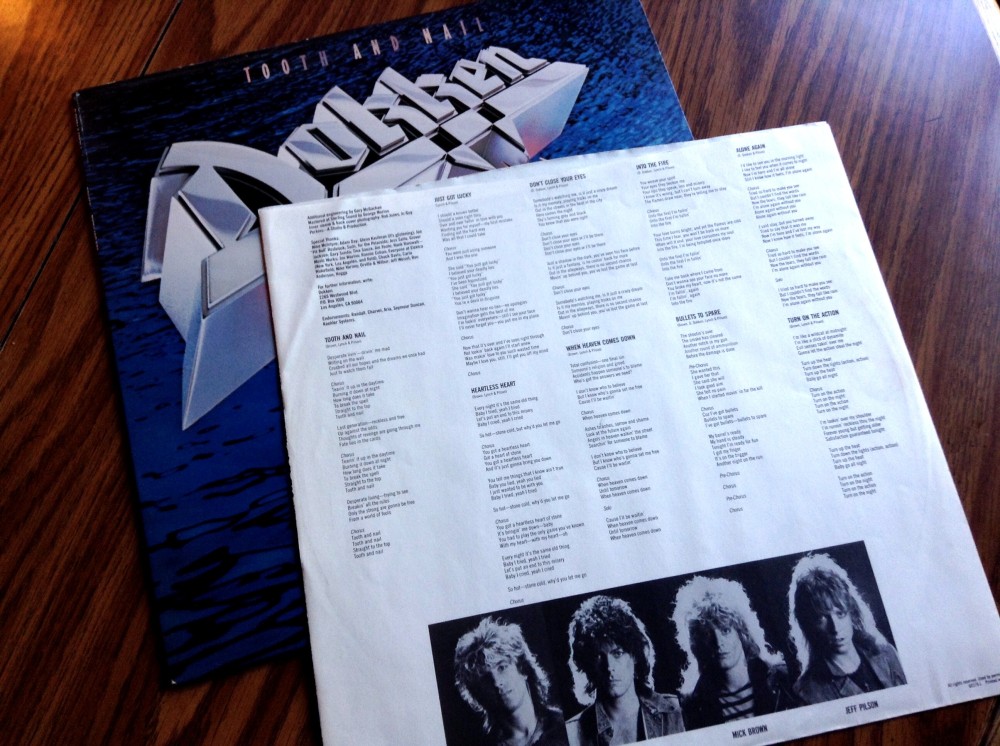 After that initial hard rock christening in 1984, 1985 introduced me to what I considered a next-level hard rock band. My older brother had a dubbed copy of an album called Tooth and Nail in his bedroom. It was by Dokken. I had come across the name in a copy of Metal Edge, but never heard them before. While my brother was working one night I took the cassette and brought it into my bedroom and popped it in the GE tape deck. What I heard wasn’t like anything I’d heard before. The music seemed darker to me, and faster. The guitar was much more prominent than in anything else I’d heard. It was faster, too. “Without Warning” opens the album on a ominous instrumental note, with synthesizer as George Lynch lays on some seriously heavy guitar playing. This wasn’t Eddie Van Halen stuff, man. This was seriously hard and heavy. It jumps right into title track “Tooth and Nail” which is a blitzkrieg of speed metal drums, Don Dokken’s banshee howl and of course George Lynch’s pyrotechnic guitar playing. My 11 year old ears had not heard anything like this before. How could my brother have hid this musical gem from me? Listening to this I imagined some great space battle, flying through the darkness of space firing laser cannons at my enemy’s ship(I was still a kid. That’s the kind of stuff that went through my head.) Then you’re thrown into the pop metal of “Just Got Lucky”, which will turn into the proto-typical Dokken style on Under Lock and Key and Back For The Attack. It’s that song that brings the chicks in. What girl doesn’t want to hear a song about a girl tearing some guy down a few notches? “Heartless Heart” has a cool riff, but for the record it’s pretty much filler. “Don’t Close Your Eyes” has some of that great George Lynch “chug-a-chug” riffing and some impressive rhythm section backbone by Jeff Pilson and Mick Brown. “When Heaven Comes Down” is a doom-laden rocker. It reminds me of some of the later Lynch Mob stuff. “Into The Fire” is a catchy-as-hell 80s rocker. It’s yet another example that Dokken were a few steps above the haze of White Rain that hung over the Sunset Strip in the 80s. “Bullets To Spare” is pretty schlocky “tough guy” metal that feels about as fake as the hair color these guys were sporting in 1984. But then we get to the shining example of 80s metal ballads. “Alone Again” played in many a car cassette decks(I know it played in my brother’s Jensen deck) while mulleted dudes drove around with one hand on the wheel and one dangerously high on his girl’s leg. I feel that Great White heard this song and went “Hey! Here’s our career right here!” “Turn On The Action” borrows some of that early years Van Halen boogie rhythms and adds some neo-classical guitar posturing. Of course Van Halen did the boogie metal better than anyone, but Roth never sounded as good as Don Dokken. Just a fact, folks.

So to say that Tooth and Nail made an impression on my still forming mind is an understatement. By 7th grade and turning into a full-fledged teenager George Lynch was a guitar hero of mine, Under Lock And Key was one of my favorite albums of 1986-87, and Back For The Attack the next year felt like this massive chunk of incredible riffs and pop-oriented metal. Also by that time Dokken had stolen the collective hearts of millions of horror fans by writing and recording the theme song to Nightmare On Elm Street 3 : The Dream Warriors. That movie was the “it” movie of 1987, and that song was everywhere. It put Dokken firmly front and center in the metal scene. Of course, Back For The Attack was the last studio album they would record before breaking up and going their separate ways(they did get back together in the 90s, but why?) They put out an excellent live album called Beast From The East in 1988, which had one studio song called “Walk Away”, a swan song of sorts that was a rather pretty ballad. The video was shot at some beautiful resort that looked as if it was atop some magical mountain. It was a nice way to say “It’s been real. Here’s something to remember us by.”

A couple of years ago I started going back and finding some of those 80s metal treasures on vinyl. Most of them are under $10, so I figured I’m not really losing out if it turns out they’re complete crap fests nowadays. I started out with Van Halen mostly, then on a trip to Ignition Music last year I found a NM copy of Dokken’s Beast from the East and felt instantly 14 years old again. It was only $5, too. One crisp $5 bill and I owned a double live LP. Seemed like a no-brainer. That followed with Under Lock And Key, then Back For The Attack. Last week I found a NM copy of Tooth and Nail from my local haunt for $7 and couldn’t pass it up. I’ve been spinning it for the better part of this week and it holds up, mostly. I’m not gonna be spinning Dokken on the norm or anything, but for a nostalgia trip it’s quite nice. Tom Werman’s production holds up pretty well. So many of those 80s metal albums are tainted with the dreaded gated reverb effect and a tinny aftertaste that makes them rather unbearable to listen to(at least to my ears.) Dokken always had a nice mix on their records and a decent amount of low end, so their production holds up over the years.

I’ve grown into someone that appreciates a production that doesn’t date the music. A transparent production that helps bring each piece into focus, but doesn’t over saturate the ears with any one thing. No over use of effects. Something as natural as possible. The 80s were a coked-out time when certain producers were too messed up to hear just how bad their mixes were. It even spilt over into the those early CD reissues and remasterings of older albums(check out that first ZZ Top’s Greatest Hits collection and listen to just how horrible those drums on “Lagrange” and “Tush” sound with the 80s reverb schlepped all over ’em.)

For a decade of overindulgence the messy production is a stark reality. At least some of it still holds up. Tooth And Nail is one of ’em that does.

20 thoughts on “Just Got Lucky”