I’m not sure what it is about robot music that appeals to me. Robot music? You know, that stuff you’d hear in those early 80s sci-fi

flicks that would be on at 1 am on a Saturday morning, usually on USA Up All Night. Or if you were lucky enough to have movie channels you could’ve been watching it on Cinemax with the added bonus of a nudity-filled sex scene between an android and a brunette space vixen. Something about those way out synthesizers and overbearing electronic bass drum hits always made me feel nostalgic, even before I really knew what nostalgia was. Since I didn’t have cable growing up, around 1984 it was grabbing these movies at the video store. Lots of Vestron, Thorn/EMI, Gorgon, New World, and New Line Cinema videos were watched back in the day and they all had those kinds of movies that were soundtracked by some guy sitting alone in a stuffy music studio with nothing more than a Yamaha DX-7, Boss Dr. Rhythm, and a Roland Juno-106(as well as plenty of Cuervo Gold and ample amounts of Columbian blow I’m sure.)

The solitude and one man showiness of the world of synths always appealed to me. Seeing what my uncle could do with just a keyboard and an acoustic guitar was pretty inspiring to my 12-year old self. Of course going to strange churches on Sunday mornings and playing your love songs to Jesus wasn’t really what I thought to be a cool time. I liked to idea of soundtracking robot sex and space battles instead. I never got prolific on a keyboard, but I’ve found some folks who have. I think these guys grew up with the same robot dreams that I had. One of these guys is Seth Haley, aka Com Truise. I’ve been listening to him intently for a couple years now. I bought his album early last year, deep in the harsh Midwestern winter. He makes music that sounds like epic space battles and android sex, but slowed down a bit and with some serious deep bass crunkiness to it.

Of course Com Truise is a play on the name of a famous male Hollywood star that came up in the 80s and got his start in Francis Ford Coppola’s The Outsiders. Of course I’m talking about Rob Lowe. Anyways, Haley is an aficionado of the decade of neon, parachute pants, and The Terminator. I’m sure there’s a certain part of the universe at large that would find what he does kind of cheesy, and I’d have to disagree wholeheartedly. The percussive end of things is like this neo-futuristic hip hop vibe and a dash of synsonic drum cheese. The kind where you mimic a robot voice and say “Syn-syn-syn-syn-sonic!!” as the electronic roto toms blast away. The synthesizers on a Com Truise record are the real treat, of course. There’s some deep and heavy Juno vibes going on, but there’s also some lighter tones happening, like a Mannheim Steamroller album was possessed by Giorgo Moroder working out some serious Klaus Schulze envy vibes. But everything feels slowed down and stretched out, like being roofied as you’re passing through a wormhole from one universe to another. 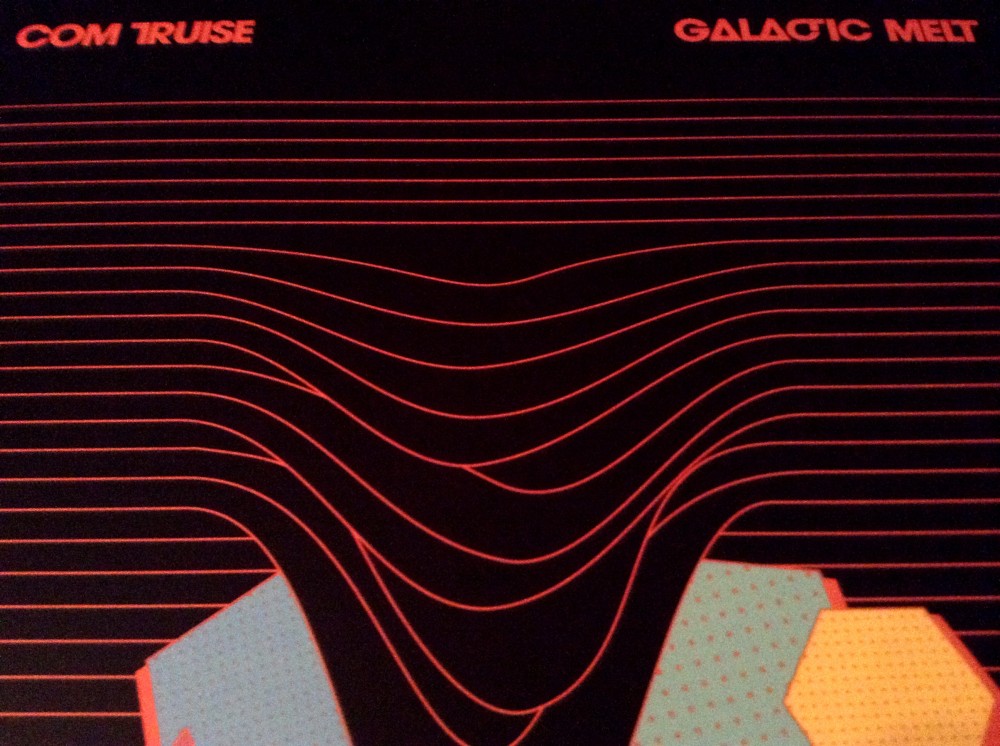 I recently picked up a copy of Com Truise’s debut record, Galactic Melt. It’s one I’m very familiar with, I just had never gotten around to picking up a copy for myself. Well I now own it and it’s pure 80s heavy synth heaven. Listening to songs like “Terminal”, “VHS Sex”, and “Cathode Girls” you’re transported to 1984. Jeans are properly pegged and your hi-tops are white as white can be. Your hair, properly business in the front and party in the back with the collars of your Izod and jean jacket in their upright positions. From there you’re transported to the year 2084. The Carnithians have attempted a total global takeover, but Jas Thurston and his band of rugged and rag tag space mercenaries are going to do everything they can to save the planet from total alien subversion. “Hyperlips” plays as Jas makes sweet, filthy space love to Mara, Queen of the Tenth Quadrant. Later on “Flightwave” soundtracks Jas’ discovery of his parents destroyed space pod floating in the Mettle Sea. “Ether Drift” powers through the Dolby Sound System as the Carnithians perish in the great Karnog explosion, while “Futureworld” runs through the credits over a triple sun sunset.

You get the gist, I’m a fan. If Com Truise stopped making records like this I’d be okay, as I’ve got In Decay and Galactic Melt to soundtrack my 80s daydreams. I’ll probably be a pathetic old man and still spinning these cheesy synth records, and I’m pretty damn good with that.