Okay, so I’m done with all my bitching and moaning in regards to that horribly, horribly gone awry trip to the local county fair.  I’m done.  I’m over it.  I wanted to share a bit about our family vacation last weekend to Schaumburg, Illinois.  Just a half hour drive north west of downtown Chicago.

The main reason we headed up to Schaumburg was to hit Legoland.  Our son has become a big fan of Legos; in particular the Ninjago brand of Legos.  It’s action, it’s ninjas, it’s Legos, baby!  So we thought on our quest to plan ahead and have fun while being fiscally responsible at the same time that this would be a great opportunity to do something fun and not break the bank.  We got hotel reservations which included four free passes to get into this land of Legos I’ve been talking about, so all we needed to do was pay for one more admission.  The hotel was nice, clean, with an indoor pool, hot tub, and work out room.  We were set.

Legoland.  Well, let me say first off that my son said he enjoyed himself.  I think he just didn’t want to hurt his old man’s feelings, but I’ll take what I can get.  In all honesty, it was a bit lame.  The Lego displays were cool, and they had some interesting exhibits, but for the most part it was an over-sized McDonalds’ Playland(if you’ve never been, imagine a room full of Capuchin monkeys hopped up on speed and throw in sneezing, coughing, and crying).  The guy at the entrance told us it would take two to three hours to get through.  Well, maybe for someone that was legless and was dragging themselves through the place with their teeth.  But for folks with working legs that wasn’t the case.  Despite the fact it wasn’t what we expected we still had a good time and I have pictures to prove it: 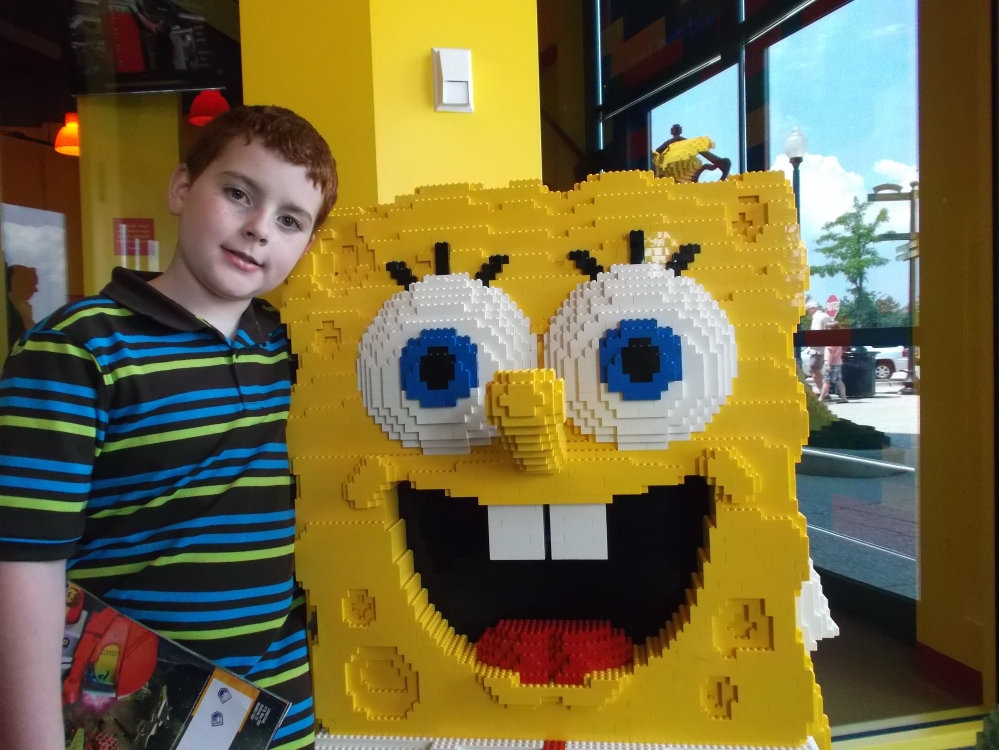 That Sunday evening once we got back to the hotel(after a stop off at the massively big Woodfield Mall) we hit the pool.  It was fun and relaxing, as we were the only ones in it.  I think if all we did was hang out poolside the whole time the kids would’ve been fine.  Be that as it may, we some some pizza to eat in the form of Lou Malnati’s famous deep dish pizza.  Let me tell you, with an ice cold draft Blue Moon to go with it it was heavenly.  Now, I consider myself a bit of a pizza connoisseur, and Lou Malnati’s was one of the best I’ve had.  Giordano’s famous stuffed pizza(also a Chicago favorite) would be right up there.  For you New York-style pizza fans, you might want to divert your eyes for a moment:

Monday came and it was time to bid adieu to Schaumburg and the comforts of hotel living, but not before another dip in the pool and some serious sweating in the workout room.  Once we grabbed some breakfast at the Corner Bakery, we headed to the all-powerful Ikea store, the biggest furniture store I’ve ever seen in my life.  This place was enormous.  It looked like some sort of monster-sized version of Best Buy from a distance.  Four stories and every square foot was filled with the finest Swedish furniture around.  My take?  It looks fantastic.  But comfort-wise it was so-so.  But hey, what do I know?  I’m just some schlep from some church-overrun Midwest town.  Anyways, those horse meatballs smelled fabulous:

After Ikea, we checked out a little record store a half hour from Schaumburg in a town called Barrington.  The name of this record store is Rainbow Records and it’s run by a gentleman by the name of  John Thominet.  It’s a small-ish place but loaded with tons of great used vinyl.  He was very nice and welcoming.  He talked to my family while I got lost in the mission to find tasty ear candy.  I ended up snagging four records, plus some movies the kids picked out.  After that, it was time to hit the long road home.

And so it goes.

6 thoughts on “On The Lighter Side: Our Trip To Schaumburg, Illinois”