When I was 19 I started working at an orthopedic company, in the orthopedic capital of the world. I was fresh off a stint driving a truck for a local paper delivering bundles of weekly issues to route drivers. The driving job felt like the first real “adult” job I’d had. Prior to that I was slinging video rentals, and before that stock boy/man at a local grocery store. But that adult job turned out to be pretty awful and when the opportunity came up to work at a big time ortho company I jumped at the chance(especially after that opportunity rose after a grueling 15 hour day on the road.)

This company was filled with the usual mix of old timers who’d worked their for 25-30 years, as well as some folks closer to my age. There was one guy in-particular that was interesting. His name was Stan and he had a perpetual smile on his face. Stan was a born again Christian and if given the chance he’d tell you about God as if he was a parakeet that lived in a sanctuary of a local Baptist church. I figured this out quickly and avoided anything more than a “Hello. How are you?”, to which Stan would reply every time with “I’m doing fine, just working at Biomet waiting for the Lord to come.” Nothing mattered in this guy’s life other than waiting for the Rapture. I wondered if this guy, when he heard a car horn in the distance, would get all worked up like a kid on Christmas morning hoping it was Gabriel’s trumpet. He was simple and rather disturbing at the same time.

It didn’t take long for someone to fill me in on Stan’s back story. Turns out he was from Amish country and when he was younger was a drug runner. He was traveling with kilos of cocaine, taking these white bricks to local dealers from the supplier. One of these trips he must’ve been speeding and a county cop shot his red lights on in order to pull Stan over. Stan panicked and put the pedal to the metal. Somehow or another Stan lost control of his car and flipped it several times. His head met pavement and drug along it for a time. Despite the near fatal crash, Stan survived(and received a cool metal plate in his head as a consolation prize.) But the asphalt acted as sort of a redo button and he went from drug-running Stan to mild-mannered Stan with a Jesus fetish. He grew a mustache and pretty much became Ned Flanders of the Midwest orthopedic community. 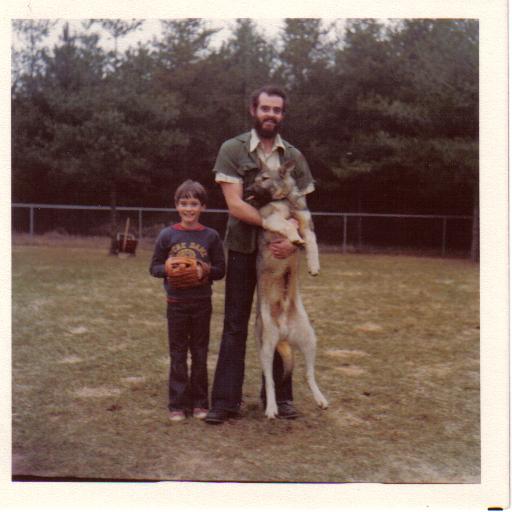 Why am I telling you about Stan? I don’t know. I think I might be in the midst of an existential crisis. I’m 45 years old, with 46 just around in December. I have coffee with my dad nearly every Saturday morning. He comes over and we talk about how screwed up things are in the world, we talk about his childhood, and we talk about shows he watches like Live PD, Dan Rather interviews, and rock documentaries. It’s pretty great, actually. He came over today instead of tomorrow as I wouldn’t be home. He asks me about my orthopedic doctor that did my spinal surgery a couple years ago. Wants to go see him as his back is really bothering him. My dad fell off the roof back in April trying to clear part of a tree off that landed on it during a storm. My dad is tough, but he’s 73 years old. He did go to his doctor, who gave him some anti-inflammatory pills and muscle relaxers. Didn’t even x-ray him(“Well you walked in so you must not be that bad.”) He took the pills and dealt with the pain. I bought him a back brace and that helped significantly. He could do normal stuff around the house like mow the lawn, clean the cars, and odds and ends. He was thinking it was just a muscle thing.

Well this morning he tells me it’s really bothering him. He told me this and I didn’t see my 6’4 giant of a father that could do anything my whole life. I saw an old man in pain that looked worried and it broke my heart. It also made me realize I’m probably over the halfway point to the big sleep myself. I told him I’d get the phone number for the doc so they could set up a consultation.

The conversation steered off from back problems and we got into the misadventures of Trump and his steadfast followers, then my dad talked about how he did stupid stuff when he was a kid. He said he was lucky he never fell in with real troublemakers. “Hell, I could’ve ended up in jail. Or dead.” He even told me about how he and some friends broke into a house and robbed it when he was a teen. He said they only stole a lighter, but still.

I had no idea my dad burgled.

I always used to compare my parents to when their parents passed away. “Oh man, dad’s still 20 years younger than when my grandpa died. He’s in great shape. Still jogs and is healthy.” My mom is 70 and her mom died at 79 of cancer. These morbid activities are akin to holding your breath till you pass out, or waiting by the window wondering why your kid is late getting home. Pure exercises in mental torture.

My dad is 73-years old. My grandpa died when he was 77. The year before he died my grandpa fell off their roof while cleaning leaves off it. That was the great downslide for Hub. He never recovered. Now, my dad does the same thing and it’s like it aged him years. I know I can’t really compare it, but I do. That’s what you do in an existential crisis. You compare things and create connections and family curses and coincidences that turn to more than coincidences. I’ve always been a worrier(thanks mom), so it doesn’t take me long to go down a rabbit hole of doom and gloom.

I better go get that number for dad.

4 thoughts on “Sitting here waiting for the Lord to come…”