It’s a conversation every father eventually has with his son. While it’s not something you look forward to it’s something that’s necessary. The young man needs to have this information in order to become a mature adult male, otherwise he’s set adrift into the world without all of life’s essential knowledge. It’s a rite of passage, really. The conversation between my son and I took place a few weeks ago after I picked him up from band practice after school. I guess he felt comfortable enough to bring it up to his old man since his mom and sister weren’t around(they just don’t understand this kind of thing.) As we headed down Union Street towards Winona Avenue to make our way thru the congested city towards home, the boy reached over and turned the radio down in the van a bit and sheepishly asked:

“Are there any later Metallica albums as good as the first four?”

You see, you need to teach children correctly now before they end up being 17-years old and confused with Load, or God forbid, Reload playing in their ear buds and the true majesty of Metallica is ruined. I was 17-years old when The Black Album came out. I was all for the slowed down, D-tuned crunch of that record. It was as if Hetfield, Hammett, Newsted, and Ulrich decided to get with the times a bit and drop the all the speed metal syncopation, time signature changes, and go for more 3 to 4 minute slabs of riffage. It fit right into my obsessions with Soundgarden, Alice In Chains, and King’s X at the time.

But as the 90s rolled on and Metallica reached for eyeliner instead of double kick drum madness and epic song structures I quickly lost interest in my high school music crush. By the time they’d made it onto the soundtrack to that godawful John Woo Mission Impossible flick I was completely done. No thanks. I wasn’t really listening to metal or hard rock or whatever was happening in that scene at the time. I was into power pop, jazz, and getting my head filled with Wilco, Flaming Lips, and Radiohead. I was more interested in music I wanted to make and write, and metal wasn’t what I was writing. I’d long since retired all my classic speed metal albums to shoeboxes and various mystery spots around the house. In my head, speed metal was for the young at heart. For those still with enough fire in them to rage against that machine. Me? No raging. I had a full-time job and a mortgage. I was raging against heating bills, yardwork, and weird neighbors.

Strange thing happened on my way to middle age, I’d found a newfound love for those classic albums of my youth. I delved hard into the Metallica end of that pool. I’d truly forgotten how amazing those first four albums were. It’s speed metal, thrash metal, and progressive metal all rolled into one. Kill Em All was the most hard rock of the records. It was more NWOBHM, with nods to Motorhead, Judas Priest, and even bits of Venom. But Ride The Lightning? Shit, that’s where things started getting really interesting.

Of all my revisits and heavy metal rekindling, I’d say the one I’ve come to love the most is Ride The Lightning. It was the first Metallica album I bought with my own money(on cassette, natch.) My brother exposed me to Master Of Puppets when I was 14, and that lit the speed metal fire under my butt. For my 15th birthday my big brother bought me the guitar transcription book for Ride The Lightning and I stayed up till midnight teaching myself “Fade To Black” in the basement( I did end up teaching myself every song in that book, eventually.) 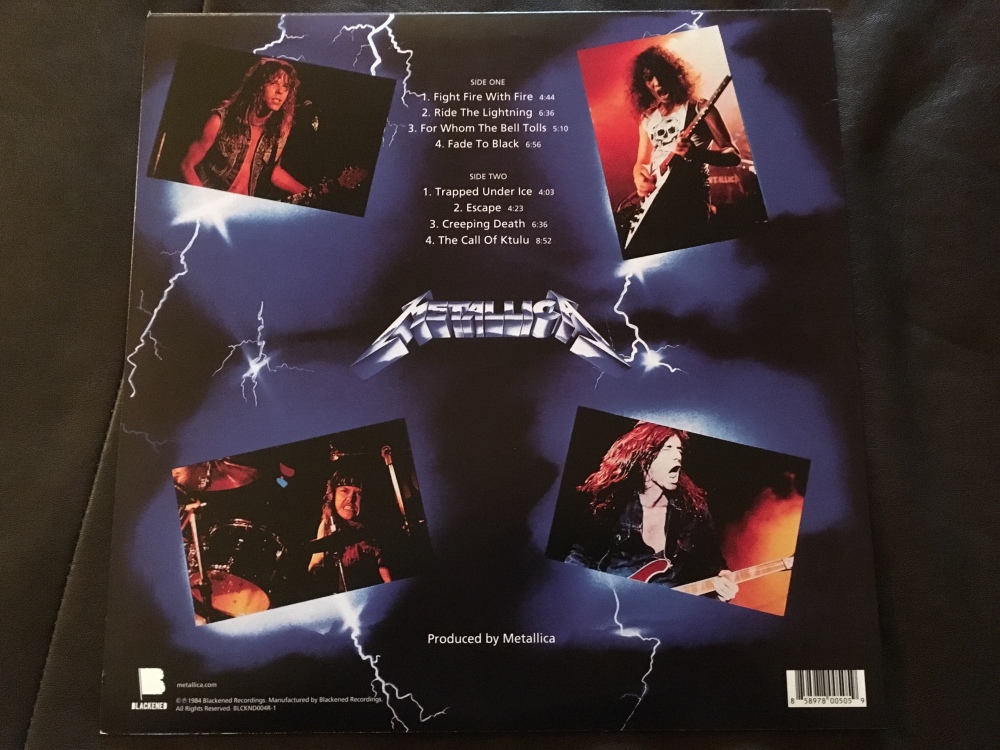 Ride The Lightning felt like a big step forward musically, both for Metallica and for how smart metal could be. The songs weren’t about killing villages, worshiping Satan, or screwing chicks. They were about anger, revenge, plagues, and there was even a nod to HP Lovecraft. It was the kind of music a kid with an overactive imagination could connect with. Opening track “Fight Fire With Fire” was the first time I’d ever truly noticed double kick drums. Hearing Lars Ulrich play in that song completely turned my brain to mush. I’d never heard anything like that before. I can still remember driving with my brother into town in his truck and he had that song cranked on those little Mazda pick up speakers. Not since we listened to Overkill’s “Fuck You” on the way to a family get-together was there that epic of a drive.

The whole album was a revelation to my brain. Title track “Ride The Lightning” was an ode to the electric chair, while the now heavy metal classic “For Whom The Bell Tolls” is as synonymous with Metallica as “Satisfaction” is with the Rolling Stones. “Fade To Black” is the first of many slow-burn metal ballads that Metallica would write. A rather beautiful track about loss, depression, and death(the beginning of Hetfield’s jump into dealing with his own mom’s death.) The breakneck speed of “Trapped Under Ice” leads into another Metallica staple “Creeping Death”. My brother had the cassette single of this track with some amazing Misfit covers, as well as “Am I Evil” and “Blitzkrieg”. Everything comes to an end on the epic instrumental “The Call of Ktulu”. An ode to HP Lovecraft, Metallica show off their prog rock tendencies that would come to a head on …And Justice For All. Here there’s still that raw, battle-scarred feel, which I think is what Cliff Burton brought to the sound.

A couple summers ago my son and I were watching the great horror movie “The Devil’s Candy”. The film goes to black and as the end credits roll Metallica’s “For Whom The Bell Tolls” plays. My son perks up and says “Who is this?” “It’s Metallica” I say. Thus opens the door to the world of speed metal to my 12-year old son. A Ride The Lightning t-shirt is bought during a school clothes shopping trip, we start listening to Metallica mixtapes in the van, and then there are Metallica playlists on my son’s Spotify.

From here, we move onto Anthrax, Slayer, Megadeth, and so on. Three days ago my son asks if he can start taking drum lessons. Am I evil? That’s debatable. Am I proud? Absolutely.

So going back to that initial question presented to me on that drive home, is there any later Metallica albums as good as those first four? I stand by my initial response and say no. That’s not to say some later stuff isn’t worth delving into. Their last three albums served up some classic speed and thrash. St. Anger is the outlier, but I think it’s worth the time(as I told my son.) But I really think Metallica changed after 1986. When Cliff Burton died something went with him. What? I don’t know. He seemed to carry with him a certain grounded outlook on life that was gone after he was. A looseness and ferocity that was grounded in love of music and friendship seemed to dissipate into a drive caked in ambition and money. Ambition and money are great, sure. But when the closeness of a band fades, so does the honesty and ingenuity in the music.

8 thoughts on “The Birds and the Blitzkriegs”