There’s a lot to be said for leaving preconceived notions at the door and letting your surroundings guide you when creating. Discarding the everyday struggles, grand concepts, and narratives and just open your head up to the universe and see what happens. There’s a certain kind of internal fire that erupts when an improvisation on a hunch leads to something incredible. Voyag3r synth guru and solo artist Steve Greene is taking this concept of letting your surroundings guide the creative process to a whole new level.

On March 15th, Greene will release the first in a planned series of album releases titled Distant Transmissions. This series has Greene using a minimal recording setup and going to various locations and letting his new surroundings guide him in the writing process. No concepts beforehand; just one small synth, digital handheld recorder for ambient textures, and a laptop. Oh, and beautiful locales to inspire.

The first release is Distant Transmissions : Kona, Hawaii. Before Greene made his escape to the next incredible location he sat down and talked to me about how this project came about.

J. Hubner:  First off, I love the new album ‘Distant Transmissions: Kona, Hawaii’. The minimal set up, the improvisational nature, and the going in with no preconceived notions before hitting record really adds to the potency of the piece. What did your minimal setup consist of on this first album in the series, and how did you decide on this particular set up?

Steve Greene: Thank you, John! It really was a whole lot of fun to do. I brought an Arturia MicroBrute, Dave Smith Instruments Tetra, Earthquaker Devices Afterneath pedal and a Tascam DR-40 handheld recorder because I thought it would be fun and useful to record some ambient sounds, too. The decision on what to bring was based on what could fit in my suitcase. I didn’t even know if the MicroBrute would send out polyphonic midi (to control the Tetra) luckily it did.

J. Hubner: I love the idea of going to an unfamiliar location and letting the surroundings inspire some kind of creativity; be it writing a song, a short story, or painting. Has this been something you’d thought about in the past? Was there something or someone that inspired you and this series? Where do the origins of ‘Distant Transmissions’ come from?

Steve Greene: I’ve had this idea for a couple years but never had the time to indulge. This was the first opportunity I’ve had to try this approach. The motivation behind it was basically a combination of breaking out of ones comfort zone and trying to tap into extraordinary inspiration. In my normal set-ups, ie: my studio or the Voyag3r rehearsal space, I have a bunch of synthesizers that I can grab and the luxury of time. With the Distant Transmissions approach, I have only a couple pieces of gear, not much time and no cushy set up like large studio monitors or shelves or racks of outboard gear. The whole situation forces you to focus, get it done and not overthink things. The trade off, though, is that the location is above and beyond the usual scene in a typical studio or rehearsal space. In this case, I got to hang out, drive around and generally soak up one of the most beautiful, yet mysterious places I’ve been to, the big island of Hawaii… Kona specifically. 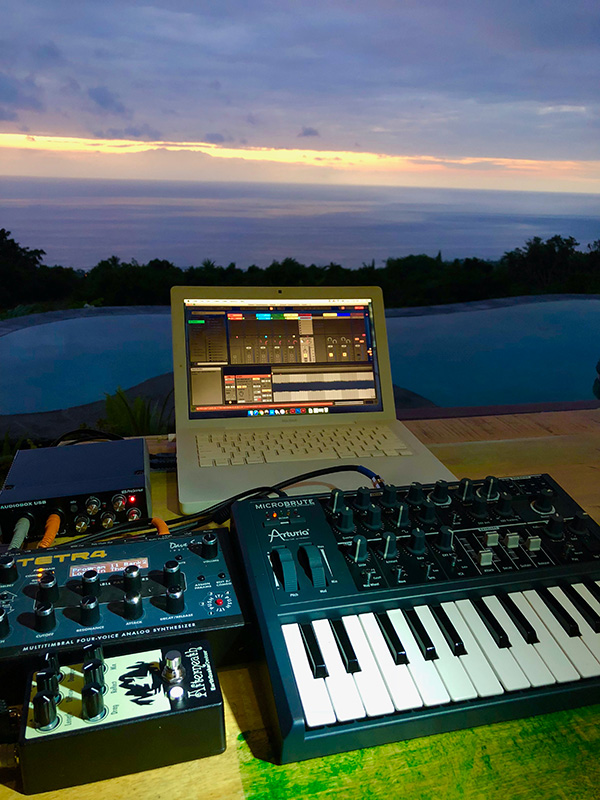 J. Hubner: This first album was recorded in Kona, Hawaii as the title suggests. I can’t imagine it was all that hard to be inspired looking out over the Pacific Ocean at dawn or dusk. When composing this album, what were you trying to go for? A theme for the geography you were engulfed in? A concept, maybe? Or more just random pieces inspired by the locale?

Steve Greene: It was absolutely gorgeous there, but that, to me, was just at a surface glance. There is also such massive power and mystery that I feel I tapped into while being there. Just the fact that enough lava spewed out of the earth to poke up islands in the middle of the ocean is awe inspiring, to me. There wasn’t any preconceived concept, but I can say that some sort of loose narrative started to take shape as I was composing each night… enough to continue to guide me and keep creating new pieces. That could easily be different on the next one, totally depends.

J. Hubner: The moods vary greatly with each of the 6 tracks. “Through The Gateway” is ominous and foreboding, while something like “The Source Of The Lights” is very much like some deep space drift ambient. Of course, deep space could be replaced with a large body of water, too.

Steve Greene: I agree and I would say that there so much varied terrain, locations, sounds and moods there that it was probably inevitable that the songs would also cover a lot of ground. The Source of The Lights was written during a light rain storm that lasted well over an hour. If you listen carefully, you can hear a plane fly across the stereo spectrum a couple of times. That little prop plane was probably flying a mile or two from the shoreline but we were so high up the mountain that it was at the same level/elevation as me.

J. Hubner: I was wondering if you could walk me thru the creation of one of the tracks? One of my favorites here is “Lights In The Sky”. It stands out as this clanging opus of robotic noise, buzzing circuits, and ‘The Day The Earth Stood Still’ sci fi dread. What was going on when you created it?

Steve Greene: Absolutely and I remember that one very well. There was a storm that evening, with a little bit of lightening. The storm did not last that long, but this spectacular heat lightening hung around for a bit afterward. We were pretty high up the mountain so there was an awesome view beneath and above that would present itself every time the lightening hit. Like natures random strobe light that gave you just a glimpse of your surroundings and then back to almost pure darkness. It was so different compared to thunderstorms at home. I can also remember contemplating the huge separation that exists there. There are just these relatively small islands and there is nothing else in any direction for at least 6 hours of commercial jet speed. Creepy, primal and humbling all at the same time.

J. Hubner: After recording this album, was it hard to go back into a studio and write? You must miss the ocean breeze and coffee on the veranda.

Steve Greene: Not really, they are just different approaches but I definitely miss Hawaii and look forward to when I can get back there. It’s truly a breath taking place that I just only got a tiny sampling of. Much more to see and experience there, for sure. The coffee is great, too!

J. Hubner: As this is a series, do you know where you plan on creating the next ‘Distant Transmissions’ album? Do you have a bucket list of spots you’d like to go to and be inspired by?

Steve Greene: Not sure where the next place will be. The possibilities are pretty vast, thankfully. A lot of that has to do with time I have available and where is doable during that time. Sort of moving targets. A definite bucket list place I would love to visit, weather recording music or not would be Africa.

J. Hubner: What are the plans once the album is released? Is there a possibility of doing some one-off shows to perform these tracks live?

Steve Greene: I’m not sure if there will be time for that because the new Voyag3r album is all done now, so that will be taking up a lot of time. I am also committed to a handful of mixing and remix projects. But you never know, sometimes I can sneak in a solo show when you least expect it.

Steve Greene: Always writing new music and mixing other people’s songs as well as a new Voyag3r album on the horizon.