As far as modern power trios go, there really is none more powerful than Earthless. With their epic improvisational pieces, album side-length tracks, and their seemingly endless jamming skills, this California trio put the “power” in power trio. Earthless consists of Isaiah Mitchell(guitar, vocals), Mike Eginton(bass), and Mario Rubalcaba(drums), and they’ve been blurring the line between psych rock mind melters and classic rock saviors since they dropped Sonic Prayer back in 2005. With each successive album they expanded their sound and widened the girth of their sonic footprint.

Each guy in Earthless are masters of their instruments. As far as modern guitar heroes go, Isaiah is up there. The guy can jam and lay down the solos like a cross between Hendrix, Page, Clapton; as well as cats such as Roy Buchanan, Tony Iommi, and Billy Gibbons. He mixes them all up into a caffeinated fretboard joyride. The rhythm section of Eginton and Rubalcaba is simply one of the best working today. Tight, powerful, and able to change on a dime when needed. The three of these San Diego musicians together are like a force of nature.

Earlier this year the band released their fourth full-length album called Black Heaven. It was a tighter, more compact album than 2013s epic From The Ages. No album side jams, plus there are only two instrumental songs on Black Heaven. It shows that Earthless can make bite-size jams for those mix tapes and when you want to just rock out for 3 minues, as opposed to 30 minutes. Black Heaven shows a band ever-evolving.

There aren’t many live albums I tend to get into. One of the few is Earthess Live at Roadburn. It’s a massive set that shows just how tight a band Earthless really is. Their strength shines thru on stage, so whenever there’s a chance to hear these guys do their thing in front of an audience I jump. That chance has popped back up in the form of From The West, another immense live album from Earthless. The set, recorded on the eve of the release of Black Heaven, shows the trio laying down some new jams, as well as some classics. The results are as good as you’d hope, and beyond.

From The West gives us four of tightest tracks on Black Heaven, an Earthless classic, and an incredible Led Zeppelin cover. From the get-go, the album blows up with the opening “Black Heaven”. The mix and production of this live set is pristine and that shines thru with this massive opening song. Earthless veers between classic rock and heavy metal live. Their sound feels three-dimensional almost, and “Black Heaven” spotlights the living, breathing quality of their songs. “Electric Flame” follows “Black Heaven” with an almost NWOBHM vigor. Part UFO, part Judas Priest, and all blistering California sun. 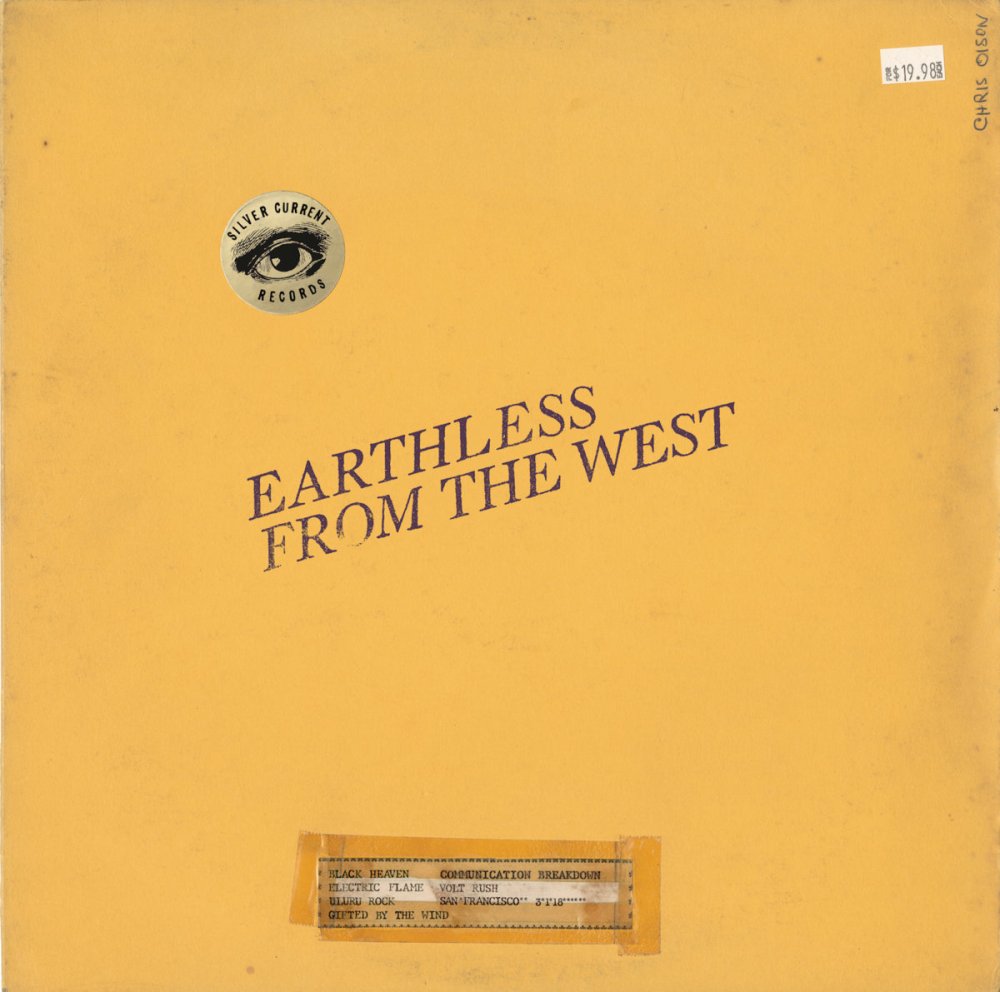 Earthless are not stoners, and they will tell you that. Their music is fueled by a love of the classics, their abilities, and with lots of caffeine. There’s an intensity and sharpness in their music that becomes even more evident in a live setting. I raise a cup of dark roast in their honor!

Besides four of Black Heaven‘s scorchers, this set includes From The Ages epic “Uluru Rock”. It’s nearly 20 minutes of mind-melting space jams and Mitchell’s fretboard mastery. If Pink Floyd and Robin Trower were somehow morphed into a space rock behemoth they might sound like this epic song. Live, there’s a whole new dimension of mind expansion added. And to end things, Earthless treat us to a mountainous rendition of Led Zeppelin’s “Communication Breakdown”. It’s a version you need to hear to believe.

The digital version includes two extra tracks. First, another epic from From The Ages in the form of “Violence of the Red Sea”, and the excellent “Acid Crusher” from the split Earthless did with Harsh Toke back in 2016. This is a case where both physical and digital are a must.

From The West makes the case for getting out of your secluded part of the world, leaving your hermit hat at home, and mingling with others in a hot, sweaty room to pray at the alter of the concert stage. There’s an intimacy and communal experience that only comes from buying the ticket and taking the ride, so to speak. Standing in a sea of sweaty faces and gazing eyes as the lights go down, the buzzing of amps signal the beginning of something special.

Two hours of lights, sound, and rock and roll.

Earthless aren’t good at what they do, they’re fucking great at what they do. If you can’t buy that ticket, then From The West is the next best thing.

4 thoughts on “Earthless : From The West”