I was heading into my sophomore year of high school when I discovered the Canadian power trio Rush. It was a pretty natural progression into Geddy, Alex, and Neil’s thoughtful, intellectual, and technical brand of progressive rock. I had been playing guitar for a little over three years and was winding down on that whole glam/hair/makeup-wearing brand of Sunset Strip rock and roll. I’d been looking for something more. Something with a bit of an edge, and something that wasn’t necessarily about penis size and hot chicks. My older brother had a cassette lying around in his room called 2112 by Rush. The front cover was an oddly placed pentagram, glowing like neon blood, so I figured if there weren’t any song titles referring to the male anatomy or groupies I’d give it a whirl. Turns out this would be my first foray into a concept album(unless you count Alice Cooper’s Welcome To My Nightmare, then I guess this would be my second foray.)

As soon as I put that cassette into my stereo in my room I flipped out. It was weird, heavy, quiet, and for something that had come out in 1976 it sounded futuristic. I wasn’t sure what I was hearing, but “2112 Overture” was the coolest goddamn thing I’d ever heard. I knew I had to pursue this band called Rush. Oddly enough, my best friend had begun his Rush journey as well. Except he’d started at the current album they’d just released called Presto, while I was starting near the beginning. My best friend had bought a bass guitar and had begun taking lessons from my guitar teacher, so he was covering the Geddy aspect and I was hitting the Alex part pretty hard.

Around this same time, my dad had bought a car that would eventually become my first vehicle. He’d picked up a 1977 Chevy Nova for a pretty cheap price. He’d done the same thing for my older brother, buying a vehicle for him before he could actually drive it. And oddly enough, my older brother’s first car was a 1974 Chevy Nova, where as his was sky blue mine was candy apple red.

I’d gotten my driver’s permit the year previous, so my mom and dad would take me out at different times so I could get my driving times in. Sometimes it wasn’t so bad, but other times it was nerve wracking for all involved. My mom had a tendency to push the anxiety envelope in me pretty good, so things like merging into traffic, yielding, and turning the car on could be bones of contention. My dad, however, was much cooler when we drove. I mean, he could quickly tell me to pull my head out of my ass, but for the most part it was a much more pleasant experience.

In the fall of 1989 I’d gotten my first big assignment in environmental science, the leaf collection. I’d also started a far more important collection, my Rush album collection. Both collided one Thursday afternoon in September of 1989. My older brother kindly picked me up what is arguably the best Rush album ever made, Moving Pictures. I’d heard tales of “Tom Sawyer” and Neil Peart’s amazing hi-hat work on it. I’d also seen the video for “Limelight” but never knew who it was. For the most part I was going into it pretty new. After my brother had dubbed 2112 for me, he’d randomly picked up Moving Pictures for his little bro and left it in my bedroom one afternoon. This very afternoon was when on a rare occasion my mom and dad decided to take me out on a driving excursion in the Nova. We were killing two birds with one stone; getting some drive time in AND collecting some leaves for my project. We headed north about 35 minutes to a wooded area near the Goshen Dam Pond. There was a new Jensen cassette deck my dad recently installed in the Nova, so Moving Pictures was going to be our soundtrack. 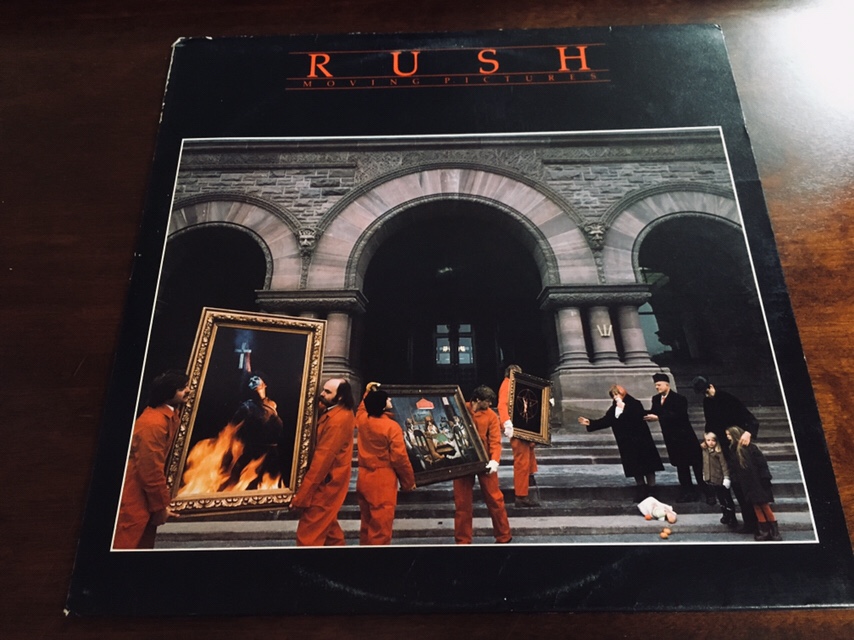 That drive and afternoon is burnt into my brain, and I still think of it when I hear “Red Barchetta”. I was cruising down State Road 15 North as Geddy sang “Jump to the ground, As the Turbo slows to cross the borderline, Run like the wind, As excitement shivers up and down my spine“. My dad was and is a car guy. He used to do legal street racing in the late 60s. A buddy of his and him used to race a ’54 Chevy. From what I’ve heard this thing was fast. There are trophies in my parents garage to prove as much. I listened to this song and thought of my dad, and thought of how heavy my foot was feeling on the gas pedal at that moment. The urge to push it thru the floorboards was astonishingly great, but I was in the car with my parents and figured I better not test fate.

We made it to the woods and started searching for Maples, Oaks, Cedars, and Birches. As the sun attempted to make its way thru a cover of green foliage and bony limbs I thought of “The Camera Eye”. A studious track that builds on an uplift of guitar and synth with Geddy’s ethereal voice taking us on a journey penned by Mr. Peart(the scholarly intellect of the band.) Bubbly synthesizers come to mind as I see a shimmering body of water in the distance, and a historical cabin sitting next to it that dates back to the early 1800s. There was a serenity in that afternoon; me and my mom and dad all searching for green, red, and brown leaves to slap into a photo album. With Moving Pictures as a soundtrack to that day, I don’t think it could’ve been any more perfect(well, maybe had Hemispheres “The Trees” been playing, but so it goes.)

I know Rush and their career can be separated out into various phases. I feel that from the beginning to 1982 is one, starting with the self-titled and ending with Signals. The second phase begins with Grace Under Pressure and winds up at Roll The Bones. From Counterparts on is another. That first phase, in my opinion, comes to a beautiful crest with Moving Pictures. It seems to capture all the instrumental dexterity, technical prowess, and thoughtful lyricism that they’d been working on up to that point. From “Tom Sawyer” to the closing “Vital Signs”, with “The Camera Eye” as the prog rock centerpiece, I don’t think Rush has gotten that balance more perfectly before or since.

Now before you all pile on me about how great 2112, A Farewell To Kings, Hemispheres, and Permanent Waves all are, I know they are all great. I love every one of those records dearly and listen to them often. But no other record in Rush’ catalog better combines the prog tendencies and use of synthesizers and technology, while also writing great pop hooks quite like Moving Pictures. I love Grace Under Pressure and Power Windows, too. I think Grace Under Pressure has some of Peart’s best lyrics, and Lifeson does some great modern guitar touches that compliment the heavy synth compositions, as opposed to butting heads with them(like what happened on Hold Your Fire.) But there’s a certain thinness with those mid-80s records that dates them. There’s a tinny, chromed-out slickness to the production that makes me long a bit for Terry Brown’s deft touch behind the board. There’s some nice low end and dark sonics that just compliment the Rush sound. There’s a culmination of all their powers and skills that hits a peak with Moving Pictures. Signals had some high points(“Subdivisions”, “New World Man”, and “Losing It” come to mind), but it feels like they’re just repeating the greatness of what came a year prior.

Anyways, back to 1989 and searching for leaves…

We drove home in what would become my own “Red Barchetta” and headed south 30 minutes back to the Hubner homestead. I sat at my desk in my bedroom with the desk lamp on and wrote:

The trouble with the Maples
(And they’re quite convinced they’re right)
They say the Oaks are just too lofty
And they grab up all the light
But the Oaks can’t help their feelings
If they like the way they’re made
And they wonder why the Maples
Can’t be happy in their shade?

Okay, maybe I didn’t write that(I hadn’t yet heard Hemispheres), but I did write about the journey for leaves while Moving Pictures soundtracked the visions and memories in my head. My best friend and I would go on to make it a competition to see who could get more Rush albums. Fortunately for us most of their pre-1980 records were available at the “Nice Price” of $5.98 in most department stores. By the middle of our sophomore year we’d both collected everything up to Signals.

While I’d continue to listen to Rush thru the 90s, for me nothing tops those first few months of discovery. The Terry Brown-produced albums to me are timeless. Those albums began my search for music with depth and technical prowess. Music that said something and had loftier goals. That road sometimes ended up at some soulless musical wankery, but most of the time I feel my mind was expanded and my eyes and ears were opened up just a little more than they were before. I really feel that Rush primed my mind for bands like Tangerine Dream, Kraftwerk, Neu!, Can, and pretty much the whole Berlin School/Komische crowd. No, they don’t sound anything like those bands, but Rush opened this pathway in my head to headier sounds.

Moving Pictures was that gateway there.