The first album I ever heard from Metallica was Master Of Puppets, so naturally that’s the one I hold nearest and dearest to my heart. Master Of Puppets was the gateway album, Ride The Lightning was the one I totally immersed myself in, …And Justice For All was the first one I bought brand new(and as a fan), and Kill ‘Em All was the one I rediscovered as an angst-y adult in his middle age. Everything after those four records I could really not listen to again and I’d be okay with that. The Black Album suffered from massive burnout and too many blues riffs, the mid-90s were a complete blur of eyeliner, arty experimentalism, not-so good covers, and soundtracks. I’ll listen to St. Anger occasionally still, and the last two albums have moments of goodness. Reminders that Metallica can still do what got ’em here in the first place: thrash like no other.

But Master Of Puppets is still their artistic high point. 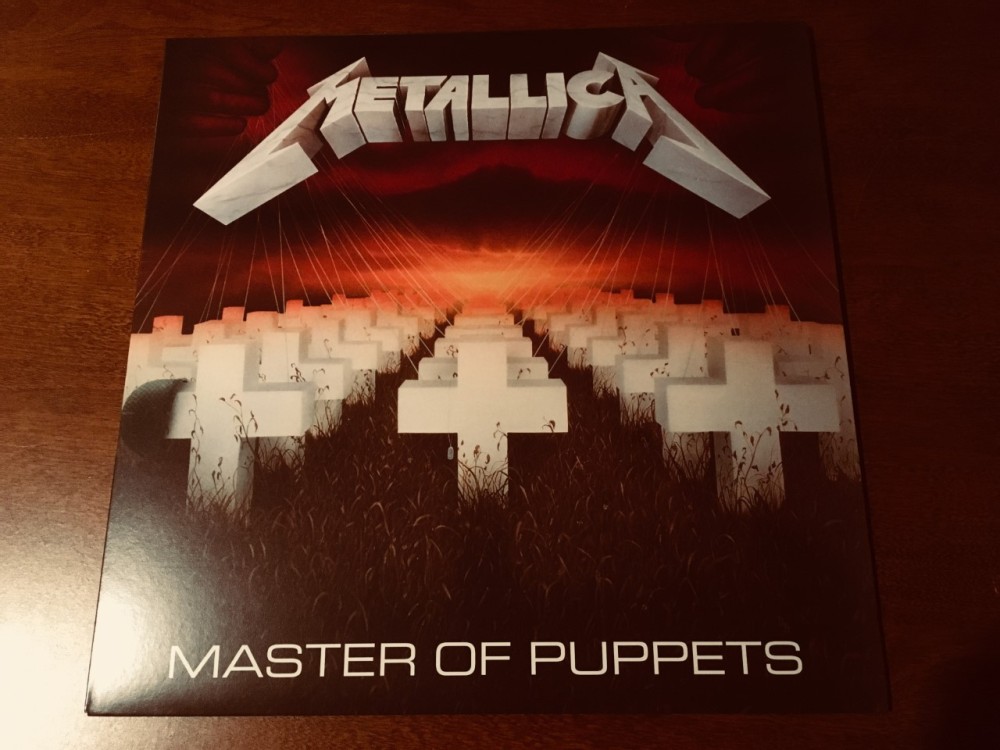 For four California Heshers who grew up on Black Sabbath, Diamond Head, and Motorhead, drank excessively, and were only five years into their music career Master Of Puppets was a high water mark for even a veteran metal band. Speed metal intertwined in progressive rock movements within the songs and lyrics that told stories. Metallica sometimes teetered on the edge of the whole evil/death stuff that Slayer, Exodus, and Megadeth dabbled in back in the heyday of thrash, but James Hetfield wasn’t quite the anti-faith guy the rest were. He grew up in a Christian Scientist home and watched his mom die from cancer because they didn’t believe in doctors. I think on a teenage mind that would have a negative effect, at least on the organized religion aspect. His lyrics always seemed to dabble in the injustice of the world, both on a social and personal level. I could relate to that. Much more so than lyrics about slaughtering virgins, serial killers, and genocide(I’m looking at you, Slayer.)

So Hetfield’s lyrics were about the human condition and authority figures lying to us in order to control us; whether those in control were priests, drug dealers, or the military. What 13-year old wouldn’t fall for that? In 1986 when Master Of Puppets came out Hetfield, Cliff Burton, Kirk Hammett, and Lars Ulrich were still barely adults. They’re in their early 20s and release one of the most influential heavy metal albums…ever. I was 12-years old when it came out, and my older brother was 18. It took a year before Metallica made their way into the Hubner boys’ ears, but when they did that’s all they wrote.

I remember very clearly the week that Master Of Puppets blew our minds. Summer of 1987 and my brother and I were spending the week at my uncle Mark’s house. He was working in the day, so my brother and I would stay up till the early morning playing my uncle’s NES. He’d usually see us bleary-eyed and half loopy playing 1941 or Excitebike as he was walking out the door for work. We’d crash for a few hours then wake up in time for a bologna sandwich and then head over to the nearby Concord Mall. It was on one of our afternoon jaunts that he told me about this band called Metallica. We were listening to Frehely’s Comet in my brother’s Cutlass when he said he’d picked up a cassette at the mall’s very cool record shop Super Sounds. I was perfectly fine continuing to listen to “Rock Soldiers”, Ace Frehely’s semi-autobiographical tale of rock and roll redemption, but my brother quickly ripped the plastic off that cassette tape and we were in speed metal territory. 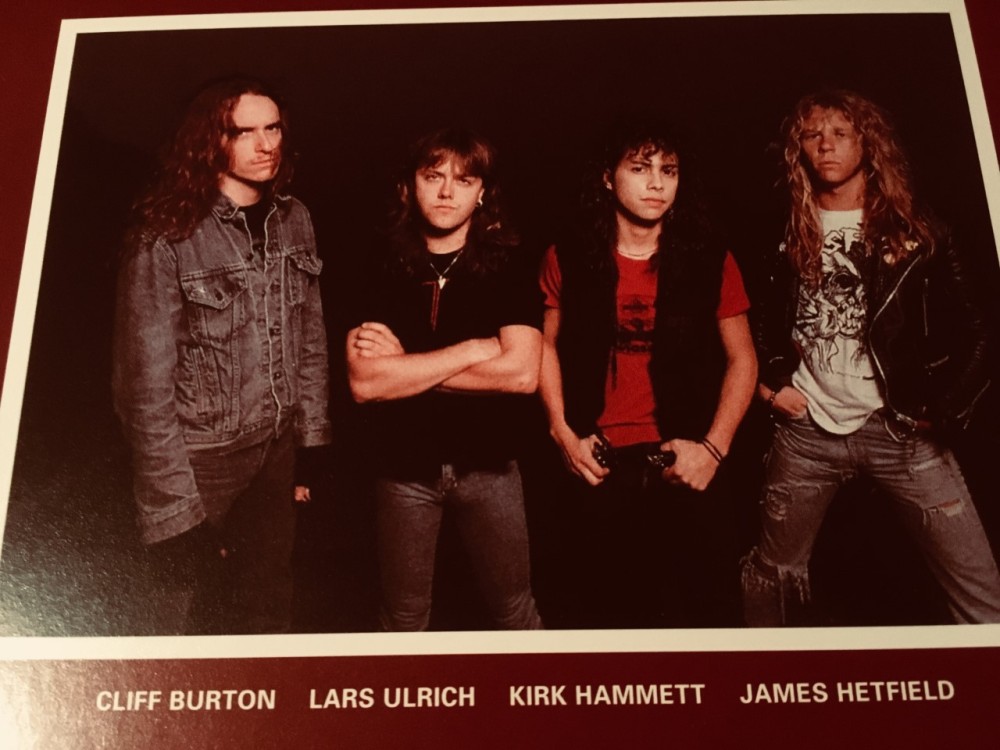 My brain didn’t know what to think of what I was hearing coming out of those Pioneer Super Tuner speakers. What the hell was this “Battery”? It felt like a wall of crunch coming down on us(it didn’t help that my brother liked to play music LOUD.) I’d never heard drumming so fast and guitars played so fast yet intricately. The vocals, while loud and aggressive, were still understandable. Hetfield was his own preacher, preaching to a choir of disenchanted youth, lost souls, and a couple Midwest goons spending the week at their uncle’s house.

We digested that album in small doses all week, usually during mid-afternoon jaunts to the mall looking for trouble(or at the very least a hot pretzel.) I can say that my music-leaning brain was rewired because of that album. Master Of Puppets made me a speed metal fan instantly. By the week’s end my brother took off early because a buddy of his had gotten them tickets to see Megadeth in Chicago at the Aragon Ballroom. That was big time stuff. This was before the Aragon had been cleaned up, as well as the neighborhood it resides in. It was a scary area. My brother made me promise not to tell my uncle who he was going to see(my uncle was super cool, but also pretty religious.) I kept my promise. In fact, I may have told our uncle my big bro was going to see a Christian rock band(pretty sure he knew I was full of shit, but still.)

After that week, the Hubner boys were official speed metal freaks. Metallica songbooks were purchased, Anthrax t-shirts were acquired from the back of rock magazines, and hard to find EPs were hunted down. We made our way through various speed metal bands(Death Angel, Fate’s Warning, Metal Church, Testament, Exodus, Venom, Suicidal Tendencies), but the ones that really stuck with us were the big four: Anthrax, Megadeth, Slayer, and of course Metallica.

It had been quite a few years since I’d listened to Master Of Puppets, but thanks to the thrifty Capitalists that Metallica are they have been reissuing their classic albums on their own Blackened Recordings record label. Out of curiosity(and obsession, sadly) I’ve been picking them all up. Last November Master Of Puppets dropped in newly remastered and shiny form. Normally I’d say this was a cash grab since I didn’t think anything was wrong with the original masterings. But given the fact that all these albums sound so good now in their newly remastered form I’ll forgive a little cash grabbing. I haven’t yet picked up the new …And Justice For All as I bought the previous version just a couple years ago. If someone can confirm or deny whether they brought Newsted back into the mix on this new version, that will determine whether I slap some greenbacks down and take that sucka home. 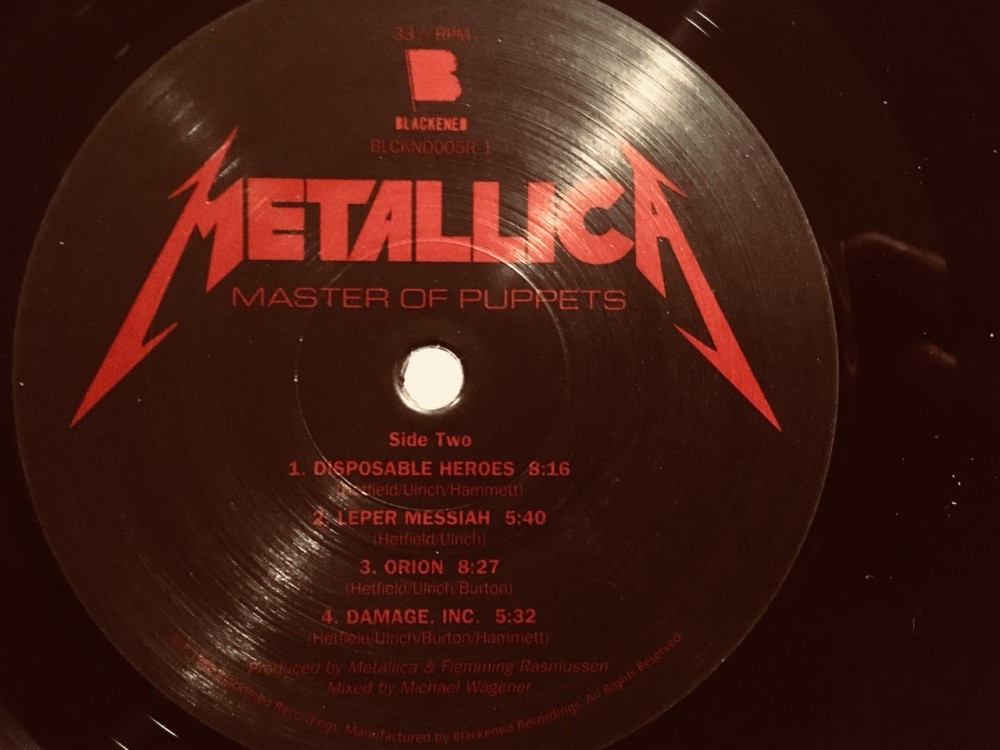 Master Of Puppets, though. Man, it’s a classic the same way that Paranoid, Toys In The Attic, High Voltage, and Screaming For Vengeance are. If you’re a metal guy or gal then there’s a short list(or long depending on who you are) of records you must own or you’re disqualified from the “Metal Club”. Master Of Puppets is on that list. Like, in the top 5. I can’t tell you how many times my brother and I have made reference to “The Thing That Should Not Be” when seeing something less than desirable. Or talking about seeing the “Leper Messiah” at Walmart or at the movies. There’s a lot of little moments and inside jokes that pertain to this record that only my big brother and I would laugh at, which makes this record that much more important to me.

I can remember him telling me about an idea his pal(the one he saw Megadeth with) and him had about a music video for “Master Of Puppets”. He said it would be like those old animated “Intermission” clips you’d see at the movies back in the day. You know, the dancing hot dogs, popcorn box, and box of Mike and Ike going to the concession stand to buy goodies? Well it would be like that except it would’ve been dancing syringes, pills, and joints as some guy was drug along like a puppet with strings leading up to a demonic hand. It’s a long song, so I’m sure there would’ve been more, but that’s all he’d ever told me about. I thought it was a pretty cool idea as a teenager, and I still sort of like it now. Sounds like something Rob Zombie would’ve made back in the 90s. Of course, this was also the buddy that my brother used to get high with after school. They’d head down to his buddy’s basement, get stoned, and watch Sesame Street soundtracked to Sabbath’s Master Of Reality(this is not a point of pride for big bro, just stating fact.)

“Battery”, “Master Of Puppets”, “The Thing That Should Not Be”, “Welcome Home(Sanitarium)”, “Disposable Heroes”, “Leper Messiah”, “Orion”, and “Damage, Inc” are what make up the Metallica classic. They soundtracked my teenage years and opened my brain to truly aggressive music. It was the foundation that I’d build a lifetime of music listening on. It also made a week in the summer of 1987 all the better.

But don’t tell my uncle about this.

5 thoughts on “Some Things That Should Not Be(But Are, So Deal With It)”