The 80s were filled with amazing network television programming. No, really, I ‘m being serious. I mean, it was amazing to 8 year old boys that loved to use their imagination and ask their mom to buy them the Kenner/Hasbro/Mattel toy that was affiliated with said network show every time they hit up Kmart when buying new gym shoes or He-Man Underoos(this may or may not have been me.) You had amazing action-packed shows like The A-Team, Street Hawk, Airwolf, Knight Rider, Miami Vice, Automan, and Tales of the Golden Monkey, just to name a few. Some of these weren’t toy fodder, but you could easily use your A-Team figures and van for other adventures that could double in the Miami Vice world. If you had a Tron light cycle that could double as an Automan toy.

Like I said, the kid with an imagination could do pretty much anything.

Another show that stuck with me as a kid was Manimal. You remember that one? Let Wikipedia fill you in:

The show centers on the character Dr. Jonathan Chase (Simon MacCorkindale), a shape-shifting man who possessed the ability to turn himself into any animal he chose. He used this ability to help the police solve crimes.

So Jonathan Chase was this suave, James Bond-type that could turn into animals and help solve crimes, all the in course of one one-hour episode. He seemed to like turning into large birds and panthers the most, though. The show is one I can’t really remember a whole lot about, but I loved seeing him morph into an animal. Granted, it wasn’t nearly as cool as the werewolf transformation in An American Werewolf In London or The Howling, but for prime time CBS TV it was decent.

So what is up with all the 80s and Manimal talk you wonder? Well two things, actually. First off is the Netflix series The Toys That Made Us. If you haven’t seen it and you grew up playing with action figures in the 80s then you need to sit down and take that one in. It’s 4 episodes, with each episode concentrating on a single toy line. First is Star Wars, then Barbie, then He-Man, then GI Joe. Three out of the four I played with obsessively(just never really got into He-Man.) Watching that series really got me thinking about growing up with toys of that caliber and using my brains to world build. I may have been bored once in a while, but for the most part I had a closet full of Kenner and Hasbro that allowed me to write my own little side adventures that maybe George Lucas or those GI  Joe cartoons didn’t provide.

This all leads to rock and roll, of course.

Last weekend I took a trip with one of my best friends down south. On the way back we stopped in a town called Kokomo. There we visited Kokomo Toys & Collectibles and American Dream Hi Fi. The toy shop is a toy collector’s dream. It was like walking into a time machine with all the old school Kenner and Hasbro toys. They also had tons of new collectibles as well. Beautiful store. Then right next door was the dingy American Dream Hi Fi. A small record shop that served lunch, beer, and apparently also has live music. For a small place in the middle of nowhere they had an exceptional stock of great vinyl. I wasn’t planning on buying anything but then Zombi’s Spirit Animal stared me right in the face and I knew I had to buy it.

Let’s get to the album… 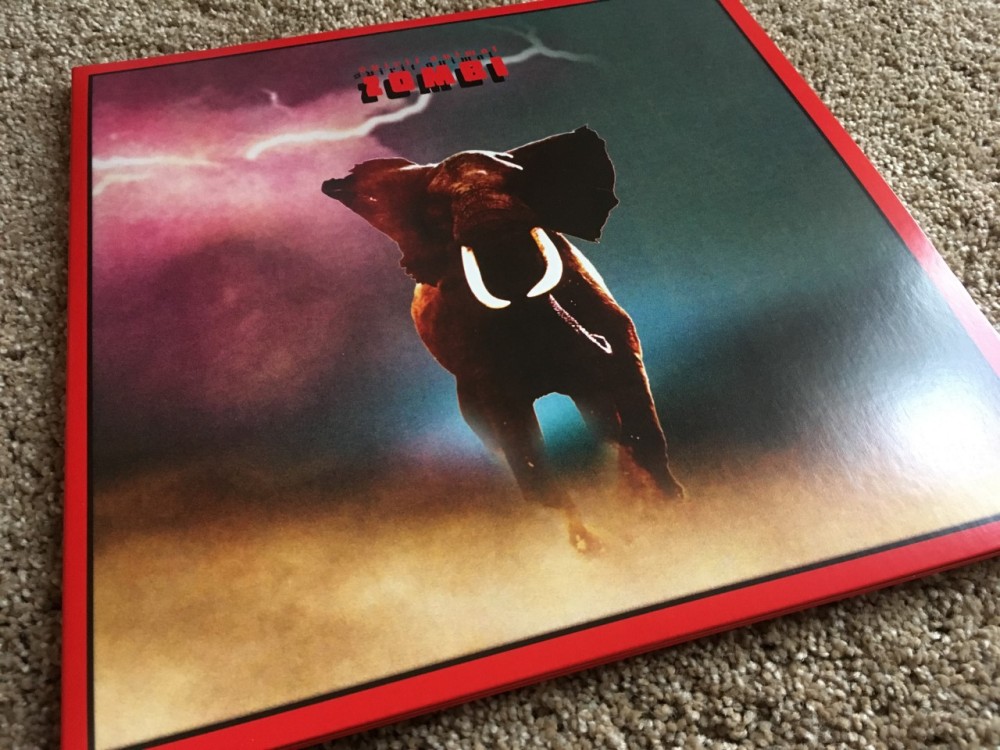 I’ve made no bones about my love for the Steve Moore and AE Paterra progressive synth extravaganza known as Zombi. I started with Escape Velocity 5 years ago and haven’t looked back. I’ve listened to most of Zombi’s albums over the course of the last 5 years. I know I’d listened to Spirit Animal at least once but it didn’t really click. I think I just wasn’t really listening as this is easily one of my favorite Zombi albums now.

It opens with the epic 14 minute space opera “Spirit Animal”. When you’re used to Zombi’s synth/bass/drums power riffage and they open an album with something as vibe-y as “Spirit Animal” it could easily thrown someone off. Gone are the progressive calisthenics of previous and future albums. Instead you’re treated to this moody, melancholy piece of music. Somewhere between Fabio Frizzi and King Crimson. With the addition of guitar here it really does feel like Robert Fripp’s world. Once you settle in it’s quite a stunning world to be in. Maybe it’s always been there, but on this album especially I’m getting some serious Crimson vibes. This opening track is the most restrained and melancholy I’ve ever heard Zombi. Truly stunning.

“Spirit Warrior” hits you square in the gut like a Tron light cycle. AE Paterra gets some galactic grooves going as those synth strings come blaring out of the speakers like android sirens from the 23rd century. As much as these guys are known as a synth band, they are one of the most complex and progressive rhythm sections working today. The drum and bass duo of Moore and Paterra is a goddamn force to be reckoned with. All KNEEL to the power of Zombi! “Spirit Warrior” has our space warriors in full power, but there’s still space for some cosmos pondering as well, those analog synths make sure of that. Moore’s bass playing assures you’ll have the feeling Geddy Lee or Chris Squire stopped by the recording session.

“Earthly Powers” sounds like a beefy King Crimson. Those Crimson vibes come thru loud and clear here thanks to the obtuse riffage and Tom Wetton-like slabs of bass. This is completely in Red territory. I’ve been used to the kinetic pace of past and future Zombi albums, so hearing something so meticulous and restrained at times from this Philly duo can be shocking. But here’s the thing: this suits them perfectly. Both Moore and Paterra have proven they can work in quieter, vibe-y territory(Moore in his film work and Paterra in Majeure.)

“Cosmic Powers” almost sounds like “Synchronicity Part 1” when it starts out but the crushing groove that comes in puts an immediate stop to the Police comparisons. Angular riffage and progressive feel make this song the perfect segue into last track “Through Time”.

I can’t recall any other songs where these two have sounded as dirge-y and fuzzed out as they do here. The song picks up steam and for the next 17 minutes it burrows into your brain like some 10-ton power drill right into the heart of Mt. Olympus. It’s part space groove/black hole funeral. It’s absolute sonic decadence.

So is Spirit Animal my favorite Zombi album now? It has been this week. I think it’s their most diverse(with 2015s Shape Shift a close 2nd.) There’s lots of things going on with this record that weren’t quite as prevalent before. The addition of Steve Moore’s guitar work really opens up the King Crimson vibes that I’d never noticed before. There’s also a cinematic feel to this record that I’m really digging.

Much like Dr. Jonathan Chase, Zombi seems to be able to morph into anything they want. From ambient vibes to progressive rock muscle; from angular 70s rock to Giallo-esque mood pieces. They’re not solving crimes, but solving musical boredom by engaging our brains with their heady music.

Zombi are my spirit manimal.