So how did you all fare? Did you survive the Christmas push to insanity? Did those kids of yours appreciate the underwear and cheap aftershave(or perfume) you left in the stockings with care? How did that experimental, gluten-free fruit cake turn out the wife made? I bet you couldn’t get your uncle Frank to put down that cup of eggnog long enough to open his novelty ‘Evil Dead’ tie, could you? And I won’t even ask about the dining table discussions between your aunt and cousin on whether Breitbart or FOX have the best news stories.

We’ve made our way past the “Christ was born” line once again. For me, this is my 44th Christmas(God, I’m old.) I think my most memorable had to have been my 4th. I spent that holiday in an oxygen tent with pneumonia at Goshen General hospital. You’d think it would be hard to remember something like that but lying in a plastic tent with doctors and nurses staring down at you wearing surgical masks is something that’s hard to forget. It’s more like a vision that comes up during hypnosis sessions with a therapist years later. Or deeply buried alien abduction memories. Anyways, besides it being 40 years ago I can distinctly remember the smell of that pure oxygen. I remember the nurses coming in and giving me a mesh stocking that was as long as me and filled with candy, toys, and whatever else. I can remember watching ‘Good Times’ on the television and my mom sleeping in a chair next to my bed. I remember distinctly how the door to my room looked, too. There was a small window where I could see if my parents were, or someone I knew, was standing outside waiting to come in.

I think I was in the hospital for a week. There were other memorable Christmas holidays. Many that were far more fun and less life and death, but that one really stands out for me. There were the countless ‘Kenner Toys’ Christmas mornings and then towards the mid-80s it was the Hasbro mornings with GI Joe and Transformers. 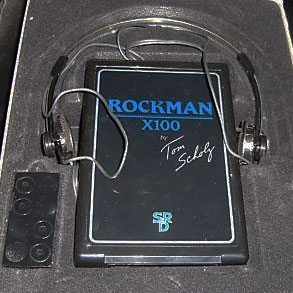 ’88 I got a pretty fantastic present. I’d been playing guitar for 2 years by then and I had my Fender Squier Stratocaster I’d gotten for my birthday the year before. I opened this nondescript box under the tree and it was a Tom Scholz Rockman. For those not familiar, the Rockman was created by Boston’s guitarist and on-call MIT engineer Tom Scholz. It was a box about the size of a Walkman that you could clip to your belt. It was essentially a little amplifier that you could plug your guitar into and play with headphones. It had two clean settings and two gain settings. I loved this thing. My parents bought it off my uncle who’d had it for a couple years and moved onto keyboards. I played that thing for years. I learned Van Halen’s “Hot For Teacher” on that.

As you get older and the Christmas mornings become more about your kids and not you, they become fun for different reasons. The joy you get from giving as opposed to receiving is different, but equally amazing. Seeing something you bought for your children make their faces light up like yours did 30-35 years prior is really indescribable. And when you raise your children to appreciate what goes into a Christmas morning, and not just expect things to appear, well that’s even better.

I celebrated my 44th Christmas morning this week. It was a great morning. Coffee, my wife and kids, and that Yuletide log burning on the television as the kids opened their gifts.

How did your Christmas go?