George A. Romero had a way with zombies. His first three zombie films, the trilogy if you will, stand as a testament to the whole zombie genre of filmmaking in my eyes. Night of the Living Dead and Dawn of the Dead were not only horrific tales of the dead rising from their graves(or from wherever they may have dropped dead initially), but there was real biting(no pun intended) social commentary within those two films.

Night came out at a time when the civil rights movement, Jim Crow, and segregation were all still very much in the forefront of social and political discussion. He mixed old school horror, new school gore, and very real race issues into a one of a kind late night drive-in flick.

Dawn took a small group of survivors(including two from a news channel and two soldiers) and dropped them in the relative safety of an abandoned mall to attempt to rebuild their lives. It really spoke to a time in the late 70s when malls were becoming all the rage and on some existential level a place where we felt at home. A one stop shopping experience where we could buy clothes, appliances, semi-automatic weapons, jewelry, and grab an Orange Julius while we were at it. As our protagonists found out, no matter how many amenities we may have, life and living can’t be created out of thin air.

So that leaves us with the third film, Day of the Dead. It is obviously the lesser of the three. It had the potential to be another amazing horror film, but the budget was cut drastically which caused Romero to cut down the screenplay significantly which caused his story to lack. Here’s the thing, I think that may be partially true. There’s a feeling that Romero had a lot more to say about the militarization of the country in an apocalyptic situation such as a zombie invasion. And I could see a case for science vs soldiers. These could have been really interesting topics to explore had their been the money and proper resources for Romero to work with. As it turns out he took a 200 page script and cut it down to an 88 page script. I would’ve gladly sat through a 3-hour epic story about zombies, soldiers, scientists, and the battle to save civilization. What we got was a movie with a lot of overacting, scene-chewing, lots of yelling, a strong female lead, stereotypes, misogynistic soldiers, and some of the best gore from the 80s.

So many characters over shot in this film; in-particular Joseph Pilato as Capt Henry Rhodes, Anthony Dileo Jr as Salazar, and the gruesome twosome soldiers under Pilato’s Rhodes. There was just so much chewing of the scenes here that it made it hard to even concentrate on the well done acting that was going on(Lori Cardille, Richard Liberty, and Sherman Howard were actually great in this.) I’m not against hamming it up a bit for the sake of fun, but the crassness of the soldiers towards the female doctor was just a little over the top for me. I think it would’ve been more effective for the misogyny to take a backseat to more existential dread of being stuck in an underground base for all eternity. 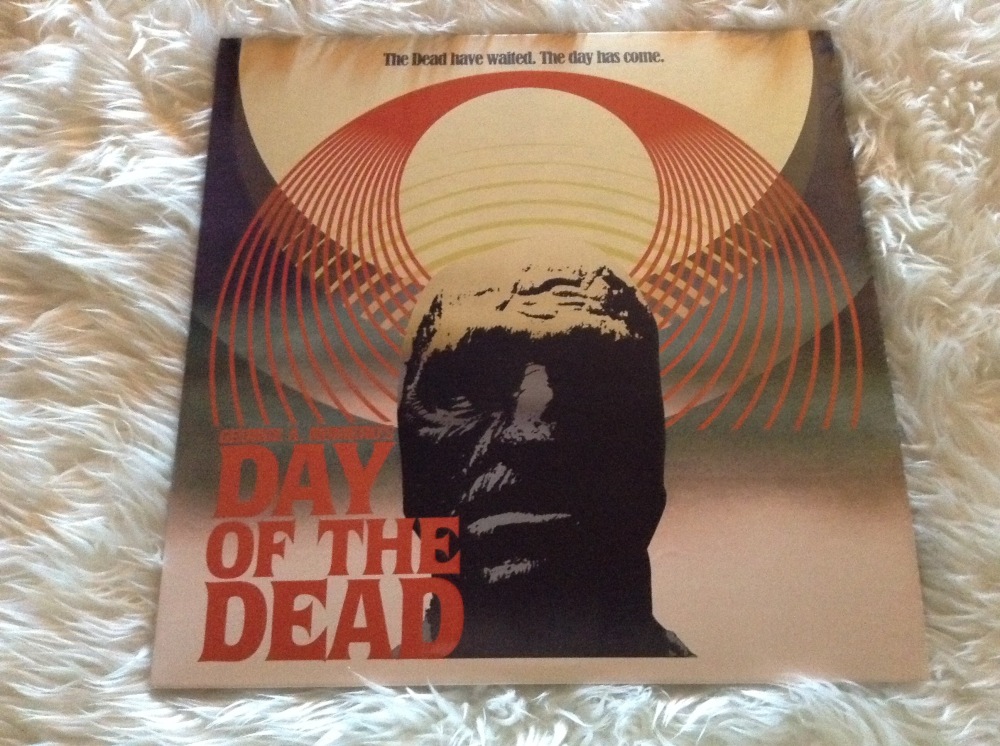 Despite all that I still love this film.

I recently grabbed the reissue of John Harrison’s excellent score courtesy of Waxwork Records. Putting this on the turntable I was reminded how much I really liked the music in this film. When it starts playing I’m instantly taken to those scenes. The opening scene of Dr. Sarah Bowman’s nightmare, to the title sequence with Tom Savini’s handiwork, to the scenes with Bub re-learning to be human again; the score was a very visceral experience for me. It’s the sort of thing that hits you like something locked away in your subconscious for years that’s set free at the drop of a needle.

Before I oversell this thing, let me first say it’s definitely a dated score. The film came out in 1985 and the soundtrack shows. There’s lots of 80s keyboard tones here. Some of these motifs could have been stand ins for 80s network TV melodramas, but don’t judge it on that. It’s all well done. Harrison made a career out of working with George Romero, having been a Pittsburgh guy himself. He seems to have locked into what Romero needed for his films. As well as Day of the Dead, he scored Creepshow and Tales From The Darkside: The Movie, as well as serving as executive producer on Romero’s Survival of the Dead. He had a lifelong connection with the king of the Dead, so he added just the right touches to Day. It’s a very warm score; human, even. It goes a long way to help add humanity to a lot of living characters that come across as dead inside as the zombies they’re hiding from.

Though Day of the Dead didn’t turn out the way the late master of Horror wanted it to, it’s still a solid chapter in the zombie canon of George Romero. It also has some of the best gore from any film in the 80s thanks to Tom Savini. It’s also got one hell of a score by John Harrison.

6 thoughts on “The Dead Do What The Dead Do, Dude”