I guess I’m getting older, dammit.

I find myself looking back at little moments that at the time seemed to be difficult and time consuming, but now I think of them and long for those moments. Little things like putting the kids in a stroller and walking the neighborhood in the fall. Bedtime stories, either out of a book or made up by me, told in the confines of a blanket fort. Bike rides in the summer complete with Spiderman and Barbie helmets. That inevitable walk down the toy aisle at Walmart or Meijer before we leave with groceries knowing there would probably be a Lego set, superhero action figure, or Barbie doll leaving with us as well.

One thing I’ve been thinking about a lot lately is the afterschool pick up at Lincoln Elementary. The last three years I’ve been the main pick up parent. When my wife started taking school photos for a living I was the one given the task of picking up the two youngest. Sure, they could ride the bus but it was an hour of their lives stuck on a hot bus with stinky, noisy kids every afternoon. If I picked them up they’d be home almost a whole 30 minutes sooner. More time for homework and unwinding, so I really didn’t mind. Sure, if I went home I would’ve had a whole hour and a half of wind down time myself. Time to get dinner going, have a cup of coffee, workout, or just space out in my favorite chair with a new record spinning. Instead of doing that, I’d hit the gym and work out before heading to the pick up line and waiting for the kids to be excused from the gym. It was time I could be doing something for myself, but I grew to enjoy the time sitting in the car and winding down from the day at work and the workout. And if I didn’t go workout on a certain day I’d hit the local bakery and grab a donut and coffee and indulge a bit as I listened to public radio in the car while various mini-vans, pick up trucks, and SUVs lined up behind me.

It was an annoyance that turned into habit. A habit I learned to enjoy. 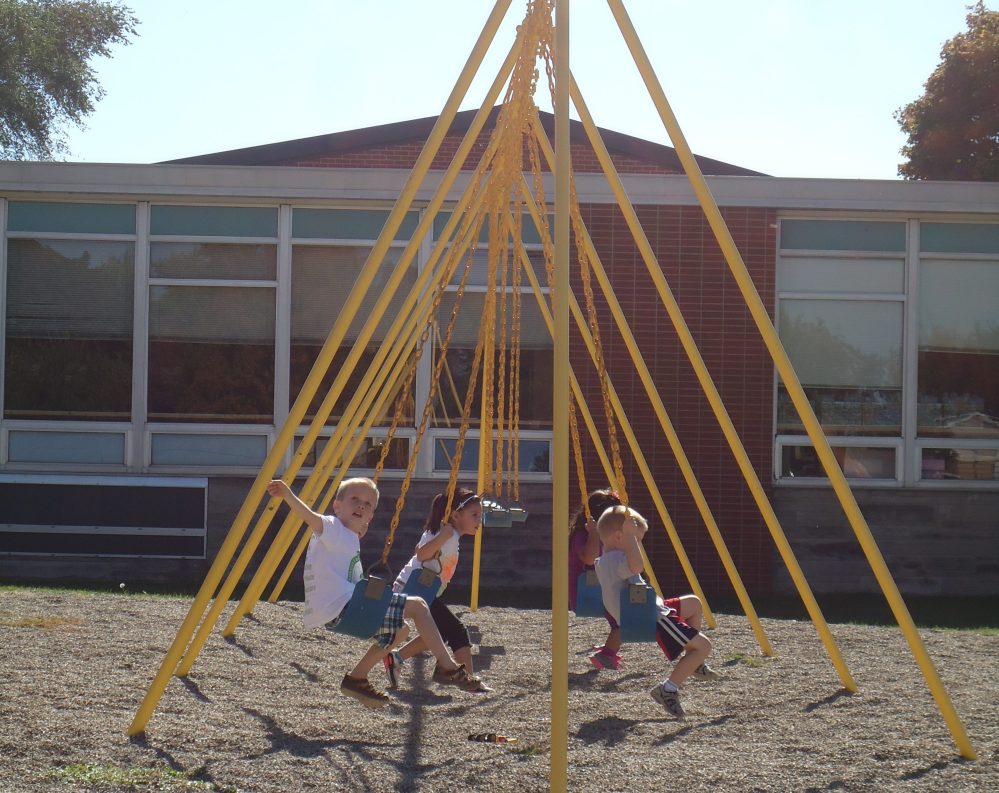 Now, the kids are all too old for Lincoln Elementary(go Lincoln Lions!) The last one to attend Lincoln was my son who graduated 6th grade last year. He’s now in Lakeview Middle School, while my 14 year old is a Freshman and my 17 year old is a senior two hours away at a private high school for smart kids(she gets it from my wife.) The old Lincoln Elementary was torn down last year and replaced with a new school that has no pizzazz or character. The pick up line is gone. No more classic brick building with its reader board and flag poles in front, nor the sidewalk that laid in front of the school for 50 years. The open, grassy field where my wife conducted the Race For Education Walk-A-Thon for five years in a row(2011-2015) is filled with a new, bland school and a parking lot. Those memories can’t be triggered by seeing that field anymore, as the field is only in memories and pictures. I suppose this is progress, but progress doesn’t take memories into account. History. Emotions.

At least not mine, anyways.

It is what it is, I suppose. Time moves forward, kids grow up, buildings fall, men go balder by the year, and some memories and moments remain like ghosts in your brain to haunt you when you least expect it. I find myself driving by the school and trying to find those feelings and moments once in a while. It’s just not the same. The street remains, but a street with a gaping hole where something that meant a lot to me once used to stand. A place where my kids grew up, parent/teacher conferences occurred, school carnivals transpired, school musicals went on too long, and kids walked in a field while I played top 40 hits to entertain them(and the teachers) on sunny Friday afternoons in October. It was a place I used to sit in my car every day between 3:00 and 3:40 listening to Fresh Air on NPR, drinking a coffee and waiting patiently for my little ones to jump in the car and tell me how their day went.

Those days are gone, and I guess I’ve gotta deal with that.

7 thoughts on “The Lions, The Switch, and A Guy Getting Old”