Last Friday night was the big show. My son and I headed out and made our way east 40 minutes to the Sweetwater Pavilion. Adrian Belew Power Trio was treating some Midwest folks to one hell of a show and I wanted my son to experience the power of Belew. What’s the Sweetwater Pavilion you ask? Well it’s a outdoor pavilion adjacent to the Sweetwater Sound music complex just outside of Fort Wayne, Indiana. It hosts a plethora of national acts that make their way through the Fort. Adrian Belew has played a few times at Sweetwater over the years. The wife and I saw him back in February of 2009 during a promotional tour for his then new Parker Fly guitar. It was some music playing and some storytelling, as well as some talking up his $10,000 Signature guitar. But the show last Friday was just the Adrian Belew Power Trio getting down to business.

The evening was opened with Los Angeles prog/pop band Spock’s Beard. The first five to ten minutes was pretty cool. These guys were all amazing musicians(the drummer was actually a Sweetwater employee that used to be their full-time drummer.) If it had stayed an instrumental affair I would’ve enjoyed maybe 35 minutes of it, but there were vocals. It was like a prog-rock Journey, or Fates Warning gone pop. I know there were some hard core fans there(I’d never heard of them prior to this show), so it was cool that some folks were digging the set. But it wasn’t really my cup of tea. There were elements of Yes, Kansas, Saga, and the aforementioned Journey. The music was distinct enough that it didn’t sound exactly like those mentioned bands, but generic enough that if you had walked up on it you’d think they were a really good cover band. 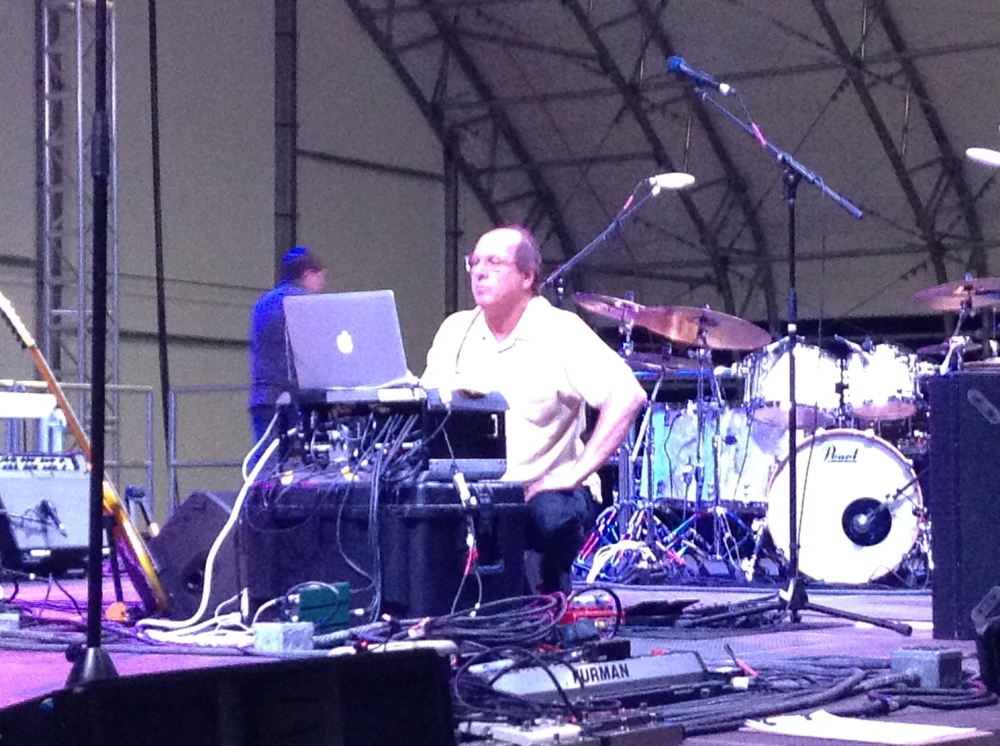 After an hour of that Spock’s Beard left the stage and their gear was hauled away by stage hands and the band alike. My son and I made our way to the front of the stage for Adrian Belew. He came out onto the stage and began messing with a Mac Book near his guitar setup. He looked like some guy leafing through the Sunday paper searching for international news with his reading glasses on. I was in awe. 20 feet in front of me looking through bifocals was, in my opinion, a musical legend. Here was a guy that had played with Frank Zappa, David Bowie, Talking Heads, and was a core member of King Crimson for over 20 years. He also created four of my favorite albums…ever. As I stood in awe of this 67-year old guitar genius my son stood next to me squishing a plastic water bottle in unison with the music playing over the PA system.

Before I knew it Belew was back on the stage in a black one piece suit, bright red sneakers and hat, along with bassist Julie Slick and guest drummer Kris Myers of the

band Umphrey’s McGee. It was a set filled heavily with both Belew’s solo work and with songs from his tenure in King Crimson. As thrilled as I was to hear those old Belew tunes(like “Men In Helicopters”, “Young Lions”, and “Big Electric Cat” to name a few), it was the King Crimson songs that really stuck with me. “Frame By Frame”, “Dinosaur”, “One Time”, “Three Of A Perfect Pair”, and “Neurotica” were all played to perfection by this “Power Trio”. It really reminded me just how much I loved those 80s Crimson records.

My son and I bathed in the sub woofer tones for an hour before he said he was ready to go home. As much as I wanted to stay I didn’t want his memory of the night to be a crappy Wendy’s burger and getting tired at the rock concert, so I bid adieu to Mr. Belew, Ms. Slick, and Mr. Myers and we made our way through the night back to our home in the woods. We talked about how good everyone was along the way, and that the first band was really good but played too long. We were both amazed at Julie Slick and Kris Myers. For a rhythm section that only had two rehearsals prior to this show they were tight and on point. Slick is a virtuosic bass player and started playing with Belew(along with her brother Eric who now drums for Dr. Dog) when they were just teens out of a music school in Philly. They were barely adults when I saw them knocking our socks off 8 years ago. Kris Myers was impressive as hell. I know nothing of Umphrey’s McGee, other than they have a funny name. But if his intensity and breadth of musicianship is any indication, I might want to look them up.

So over the weekend that followed I sort of fell down the 80s King Crimson rabbit hole. I used to own the three big 80s records on CD, Discipline, Beat, and Three of a Perfect Pair. I bought them back in the early 90s when I was a full-on Belew fanatic, eating up everything I could that he was involved in. I didn’t jump into the Zappa, Bowie, and Talking Heads stuff till years later, but the Crimson stuff I dug. Back then I was more interested in the poppier aspects Belew brought to the prog rock monsters acerbic vibe. Robert Fripp already seemed to me like an android programmed to scare people with his angular guitar style and soulless scowl, so adding the affable Belew to the mix I think really changed the vibe of the band. VROOM was an early 90s record that I really enjoyed, too. Belew’s solo sound had really permeated tracks like “Dinosaur” and “One Time”. The band had been expanded to include guitarist Trey Gunn and percussionist Pat Mastelotto. It was a companion piece to the following year’s THRAK. It contained a song called “Walking On Air” that put me in mind of both their classic “Matte Kudasai” and something John Lennon would’ve recorded in the mid-70s.

Shortly after that I kind of fell out of King Crimson and Belew for years. I’d revisit Belew of course, but Crimson lost favor in my head. A couple years ago my interest re-peaked after I’d begun to get into the John Wetton-era Crimson in the early 70s. I’d hit up Youtube and watch old live clips of the 80s stuff and was once again floored. But more so by the band and not just the guy singing and playing crazy guitar. The syncopation between Tony Levin’s Chapman Stick playing and Bill Bruford’s intricate rhythms was pretty mind-blowing. I could also really see where the guitar lines were drawn between Fripp and Belew. Fripp was the anchor with his chord structures while Belew created soundscapes and chaos one minute and calm and hazy atmosphere the next.

I found copies of Discipline and Beat on vinyl at pretty reasonable prices over the last two years and have been enjoying them tremendously. “Frame By Frame” “Elephant Talk”, “Matte Kudasai”, “Thela Hun Ginjeet”, “Neal, Jack, and Me”, “Heartbeat”, “Neurotica”, “Waiting Man”, and “Requiem” are current favorites. I still need to find a copy of Three of a Perfect Pair. Soon. Very soon.

So taking my son to his first concert worked on two fronts. First, he got to see a master up close and personal his first time out. When he’s older I think he’ll truly appreciate just how big of a first gig this was. We had a great time together, and we also got a soft-serve cone of ice cream at the show. So ice cream and rock and roll: win-win. Second, seeing Mr. Belew up there revisiting some of his classic Crimson tunes really got me to give those records another listen and I realized I was only hearing part of the genius all those years ago. I feel all the more lucky to have seen this show now.

Now if only Tangerine Dream tours soon, I can make my son’s next show even better. And no lousy Wendy’s this time.