Robert Fripp seems like the most serious guy on the planet. I’m not sure I’ve ever seen a picture of the man smiling. His looks are usually somewhere between disdain and villainous hatred. Like either a brilliant mad scientist or a brilliant mad Nazi scientist. I can recall many years ago when I was in my teens I watched a video clip of Fripp on MTV playing with a group of youth, all playing acoustic guitars. It was a piece he’d written. It was this robotic, emotionless display of musical precision. It was like watching Jeremy Irons conducting a children’s guitar choir where all the children were from the movie Children of the Damned. I’d wondered what was so great about this android that played guitar.

Then I got a little older and figured it out.

First it was the 80s reboot of King Crimson with Adrian Belew. I’d been a huge fan of Belew, and had begun going through his back 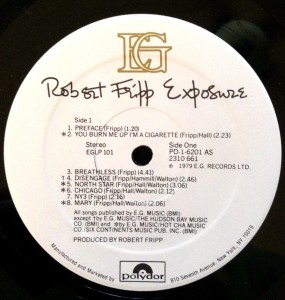 catalog. I discovered the KC albums Discipline, Beat, and Three of a Perfect Pair. Loved them, and I thought I loved them because of Belew. It turned out that was only partially right. For all of Fripp’s seemingly emotionless looks and flawed friendship making abilities, he was an amazing guitarist. I still didn’t really get into the really early Crimson stuff, but those 80s records, as well as the early 90s Vroom, were pretty great.

I eventually took the plunge on the Wetton-era Crimson albums and fell hard for them, especially Red. Simply stunning record. I ended up grabbing the Fripp & Eno record No Pussyfooting last year and had seen a copy of his solo debut Exposure the same time. I decided against the solo endeavor as I didn’t know anything about it. Figured I’d wait and see if I could find anything else about it before dropping my hard earned cash on it.

Well, thanks to an endorsement by White Hills’ Dave W himself about how great Exposure was I decided to go for it and pick it up. On my recent Record Show jaunt I found a pretty clean copy of the Robert Fripp album for $5. So glad I picked it up as it’s pretty amazing.

Recorded in 1979, and influenced by the music scene of New York at the time which would have have been the punk/new wave, Exposure is a vital musical journey through King Crimson-ish guitar heaviness and punk rock jaggedness. Songs like “You Burn Me Up I’m Cigarette” and “Chicago” seethe with both rock and roll fun and madman vitriol. “Exposure” sounds like Blondie fronted by Bjork instead of Debbie Harry, while “Breathless” is reminiscent of Crimson’s “Red”, in all it’s claustrophobic and angular glory. “North Star”, wonderfully sung by a young Daryl Hall shows off what the white soul guy could do without his mustached John Oates. The music sounds strangely like what would become “Matte Kudasai” on Crimson’s Discipline. I’m not complaining, as it’s an amazing track. Had Hall’s record company not put their foot down Hall would have been a bigger presence on this album. As it stands, there was a handful of singers helping Fripp out, including one Peter Gabriel who contributed the beautiful “Here Comes The Flood”, one of the true highlights here.

Despite the presence of some big names in the personnel department, this is still very much a Robert Fripp affair, complete with his “Frippertronics” and dark ambient moments. At times it’s as if he dissected a track like Crimson’s “Providence” and spread it out over Exposure in smaller increments. Peter Hammill-sung tracks are like John Wetton on hallucinogenics. “I May Not Have Had Enough of Me but I’ve Had Enough of You” is pure menace. He at times sounds like Wetton and Ted Nugent fighting for supremacy in the same body. Pure madness.

I can say I am glad I found this album.

10 thoughts on “You Burn Me Up I’m A Cigarette”