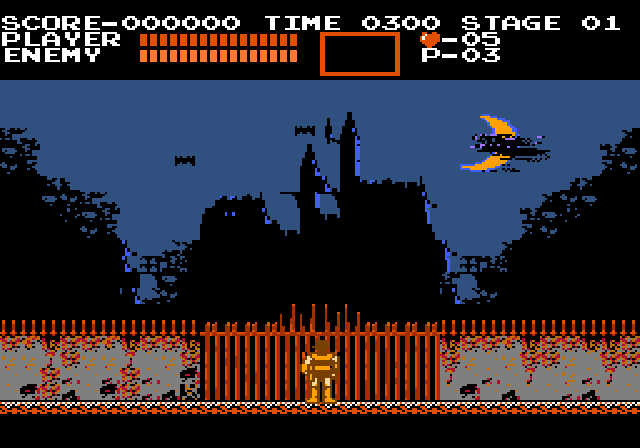 I once had this dream that I was inside Dracula’s castle. It wasn’t Bela Lugosi’s, Frank Langella’s, Chris Sarandon’s, Gary Oldman’s, or even Leslie Nielson’s Dracula. It was the castle in the old NES game ‘Castlevania’. It was quite gorgeous from what I can remember. Huge, curtained windows, sprawling rooms, cathedral-like ceilings, an old grand piano with two inches of dust on it, and hardwood floors that had some spots rotting away. I can remember very vividly walking around this mammoth house, having both this feeling of amazement and fear. How I ended up in a castle made of pixels? Well my uncle had bought the place in an auction and I was there checking it out. It was just after a rainstorm and I could smell the precipitation in the air. You know that smell in the air right after a good and heavy rain? Around where I live it smells like the lake after it rains. I’m surrounded by several lakes, so after a storm when you walk outside the overwhelming smell of lakes Chapman(Big and Little Chapman), Tippecanoe, and Sawmill hit your nostrils. I always have the same vision hit my mind after a rainstorm, and it’s me on my grandma’s pontoon on Lake Manitou as a kid. We’d always go out and fish when I was there. I had no desire to fish ever as a kid except when I was there. Sure, it was great to pull in a bluegill the size of my palm every now and then. But the real thrill was just cruising the lake hoping to catch a glimpse of the great “Manitou Monster”. The monster in question was some strange and enormous sea beast that found its way to a freshwater lake in the Midwest. My grandpa had come into contact with this creature late one night heading back home on the pontoon after a night of drinking at the Moose Lodge. Was his story credible? Hell no, but it was fun considering the thought.

But hey, I got off subject. I dreamt I was walking around a castle created by Japanese video game designers back in the late 80s. What’s my point? Well, my point is that I think it’s quite amazing how dreams can stay with you after so many years. I’m sure there’s just as many dreams that never stay with you, but the ones that do are real doozys. And the ones you have as a kid, those are the keepers. Our young minds are so much more perceptive to things than our disgruntled, annoyed, burnt out adult minds are. Even in strange dreams as an adult I find myself thinking “Sure, it seems I’m melting into the ground as the sky rains blood, but did I turn off the oven? And the kids better not track blood into the house.” As a kid if I was melting into the ground and the sky was raining blood I would’ve woke from that dream and pondered it for weeks.

What got me thinking about dreams, well nightmares, and childhood was something my son told me a couple weeks ago. He’d told me that he’d had a nightmare the previous night. Apparently he’d dreamt that he’d gone into the bathroom and looked at his reflection in the mirror. He’d smiled at his reflection yet his reflection didn’t smile back. It just stared at him with no expression whatsoever. After he’d told me that I kinda chuckled and told that would be pretty scary if that really happened. I started thinking about it more and more and thought that seemed to be some great ploy they’d use in a half ass horror film. Watching it in a movie it wouldn’t seem that scary, but if that really happened? That would be scary as hell, and especially to a kid. I think it’s the idea that an expression of kindness is so coldly dismissed…and by your own self. It’s just a really creepy thought. He’s had plenty of dreams with zombies and monsters. That’s normal nightmare stuff. But ones own reflection not smiling back from the looking glass? Damn, that’s some serious psychosis going on. That’s like Bergman and Cronenberg getting together for some serious mindf*****g right there.

My son’s bizarre nightmare reminded me one of the strangest and disturbing dreams from my childhood, and it had nothing to do with monsters. I was outside playing and my parents appeared to take me somewhere, but they didn’t look like my parents. They had the shape of my parents, yet the shapes were filled with television static(for those unaware of what television static is, watch ‘Poltergeist’ and get back to me.) It was as if my parents were gone; devoured by white noise and electronic static but still very much willing to take me for ice cream. For some that doesn’t sound very scary, but for a rather neurotic kid that would lock all the car doors and duck in the backseat whenever my parents stopped to pick up beer at the liquor store before we headed home it was a traumatic turn of events in my head. That dream was followed closely behind by the dream I had where I found my dad in the kitchen making coffee, and at the same time he was in the back bathroom shaving. How could there be two of my dad? One is shaving his beard and the other is making some Maxwell House? I knew 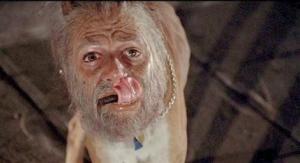 enough and seen enough sci fi flicks to know one wasn’t real. I think I may have watched the Donald Sutherland version of Invasion of the Body Snatchers at some point around that time(the dog with the human face still haunts me.) That may have played a role in that nightmare. What else may have played a role in it was that it was probably NCAA basketball season and IU probably weren’t doing too well. Those game days were always interesting as my dad went from optimistic viewer to angry TV watcher in just mere minutes. Dr. Jeckyl and Mr. “Why can’t you make a f*$%@#g shot?!?!” March Madness, indeed.

All of this from some weird dream my son had? Yeah, I guess so. I think it just goes to show that some of the scariest stuff isn’t so much the monster under the bed, the zombies roaming the streets, and the skies raining blood. It’s really dogs with human faces, imposters for parents, and Bobby Knight. That’s the stuff nightmares are truly made of. 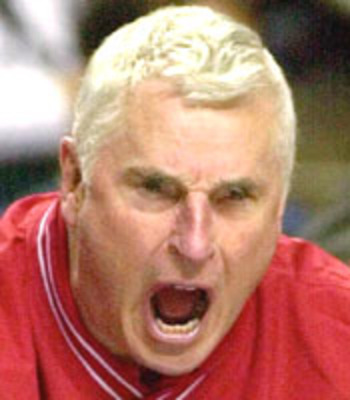 7 thoughts on “Nightmares and other great memories”