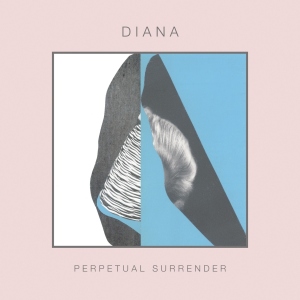 Diana are a Canadian synth pop band comprised of members of other Canadian bands, though not all are synth pop. That is inconsequential for you to truly enjoy their debut Perpetual Surrender. What is consequential is that you love synth pop, or at the very least occasionally get the itch to listen to Thompson Twins, Missing Persons, Cocteau Twins, or This Mortal Coil. If you grumbled reading any of those band names you may want to just keep moving along. For the rest of us, we’re in for a real treat.

It starts out simply enough, Perpetual Surrender that is. “Foreign Installation” opens with icy synths coming over the horizon before they disappear with the push of an electronic kick drum and Carmen Elle’s calming voice croons into your ear before the chorus comes in big and strong like a wave of angst and emotion. This track oozes 80s’, complete with some great guitar wankery in the mid section that you’d swear was played on a white Steinberger electric guitar. Here’s the thing, like Bear In Heaven(another wonderful band that dabbles in 80s synth fun..albeit in darker corners), Diana makes these songs something unique. They don’t just put on the eyeliner and vinyl pants and rock their DX-7s. No, you see they create something that sounds vintage, but vital at the same time. “That Feeling” has a dance floor groove to it, but has enough going on in the background that it keeps your ears and legs busy. Title track “Perpetual Surrender” sounds like Sade getting it on with Oingo Boingo. Or Was(Not Was). Carmen Elle also brings Annie Clark, aka “St. Vincent” to mind with her voice, giving the illusion you’re hearing a St. Vincent/Animotion mash up at times. “Strange Attraction” should be playing on radios everywhere, instead of Drake or whatever the kids listen to these days.

Like I said before, Diana are no stranger to the Synsonics drum sound and icy synths. But unlike a lot of purveyors of the 80s synth pop sound as of late, Diana are giving us really good songs to enjoy with our morning DX-7 fix. No other song on this excellent debut proves that more than the stunning track “New House”. It delves deeper into less bouncy territory and into more of a melancholy direction. With sparse electronic percussion, faint synth waves and Elle’s voice singing “What do I gotta say to make you wanna stick around?”, as if pleading for a lover to stay. You know, the good stuff. It’s a hazy, quiet, and emotive track that could hint at what direction their next album could go in.

There isn’t a spot on this album I would change. No note I’d move. No mood I’d lighten or darken. Perpetual Surrender is an album to soundtrack summer fun, fall walks, and winter doldrums. Maybe spring cleaning, too.