We moved our oldest back to campus for her junior year of college. This makes the fifth year in a row we’ve made the journey from her basement bedroom to a dorm in the heat of August. The first year was August of 2016, when she made the journey to a private school for her junior/senior year of high school. That year was rough for me. In my heart I felt she should stay and finish out her high school career with the friends she had made dating back to grade three when she went from her elementary school to another for the gifted and talented program the school district offered. But my wife felt(and I did as well deep down) that she just wasn’t going to be challenged enough at her high school. I can remember helping her set up her room on that hot August day, asking her where she’d like various posters and her computer speakers while trying to hold back tears.

It was rough, but I think it was a good call in the long run. As we were leaving her back then her roommate who she would become good friends with was sitting trying to hide the fact that she was crying. I just remember looking at her and saying “It’s going to be okay. You’ll do great.” Or I might have just thought that and gave her a look of awkward comfort. It was something I didn’t have to say to my own daughter, as she was pretty much ready to kick us out by then.

So Monday was her move-in day to what is easily the most uncertain year of her academic career. Who knows what will happen in a month, or two weeks for that matter? There could be a huge outbreak of Covid-19 and we’ll be moving her back by the middle of September. I hope that’s not the case, as I think we’ve all had enough of each other. She came back for spring break a week early in March and only returned to pack up her belongings as the campus moved to online work and closed the school down.

Since the end of March my oldest, as well as her two younger siblings, have been feeling the walls closing in as school and personal space has changed drastically. At this point everyone is back in school with social distancing rules in place. If the kids and administrations keep these rules in place this could continue for the remainder of the year.

My wife decided we should stay overnight down there, as it’s a three-hour drive one way. Since we have also felt the crunch of five people stuck in a mid-sized ranch home since March an evening with just two of us alone in a hotel room with nobody to bug us sounded pretty good. I wasn’t gonna argue.

She had stayed at the Canyon Inn back in January, which is an Inn located on the McCormick Creek State Park grounds for a nature conference she attended for work. It was cheap and located only about 30 minutes from my daughter’s campus. We’d have a short drive after we were done, plus if our daughter thought of anything she needed that we’d forgotten she could just text us and we’d get it to her in the morning. Win win.

The Canyon Inn is indeed located within the park. It’s a stately brick building within the miles of trees that cover the state park. You walk in and it’s like the estate of a crazy old hunter that left his belongings to a not-for profit dedicated to preserving the forests of southern Indiana. Lots of wood paneling and ornate, Davy Crockett-like things. Stuffed bobcats in glass boxes and dinosaur fossils laid out. Imagine The Overlook Hotel but re-situated in Quentin Tarantino’s The Hateful Eight. There’s a restaurant located in the Inn as well, so that was convenient. All-in-one. We could check out some of the trails, then head back for a hot meal, and then retire to our comfortable room and fall asleep watching some movie on cable. I even brought my Chromebook thinking I could do some writing in the room, or the glorious lounge. Maybe have a drink while typing away about the day’s events, or possibly an album review. 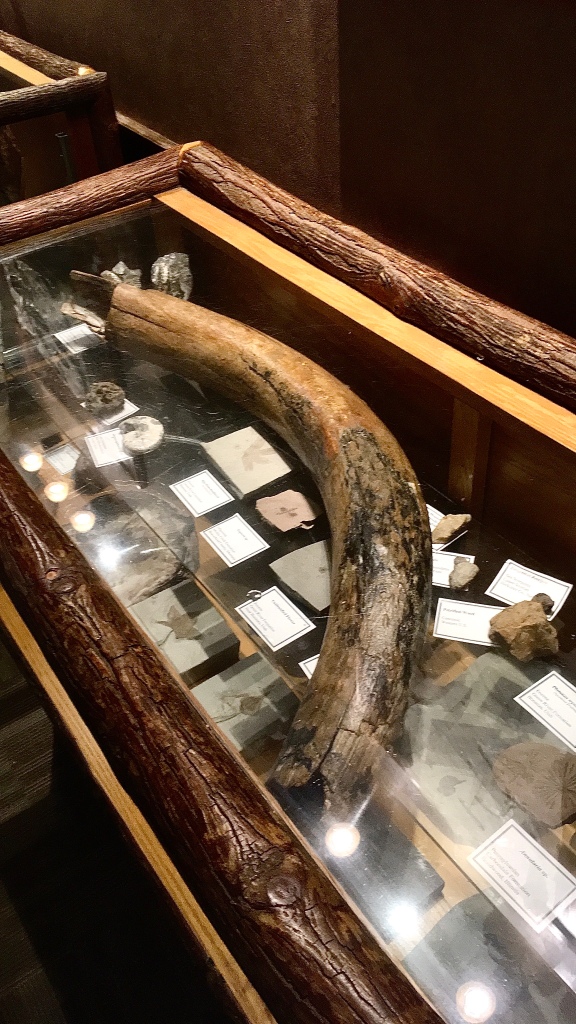 Well the room wasn’t quite much at all. Very small with what appeared to be TV Land on every channel of the not-so modern flat screen. Only two lights worked in the room, and the bathroom was what I’d call “closet-size”. The shower, my wife found out, was even smaller. 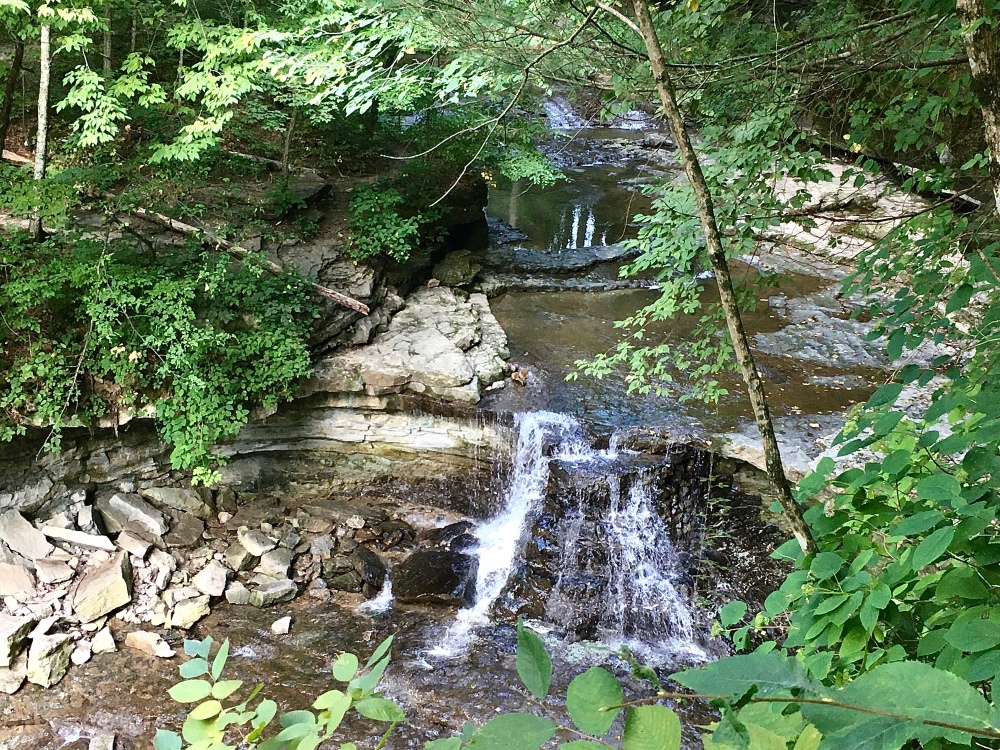 After a bit of watching Andy Griffith my wife asked if I wanted to go hit the trails and see if we could find one of the falls. I wasn’t really keen on anything at that point so I said if you want to then let’s go. We headed out and found a fall pretty quickly. We ventured down to the creek as my wife wanted to put her feet in the water. We walked out onto the rocks and gawked at the wonder of nature. It really was quite stunning, looking at the various layers of rock that had withered over time to make this chasm in the earth. Had it not been 98% humidity I would have loved to venture for hours in those trails. I headed back up the hill to get an aerial view of the creek and limestone walls.

Soon enough my wife had satiated her appetite for drowning her toes in McCormick Creek. As we made our way back to the Inn we made the best decision we could have and that was to get cleaned up and go to a brewery for dinner. Nashville, Indiana was only about 45 minutes away. This is where Big Woods Brewing is located. They have the best bbq pulled pork nachos and damn good beer. The thought of ending our day on chicken pot pie or meatloaf at the Canyon Inn restaurant with a chaser of weird tasting water and more Andy Griffith was pretty sad. Thanks to my wife, we destroyed the timeline of sadness. 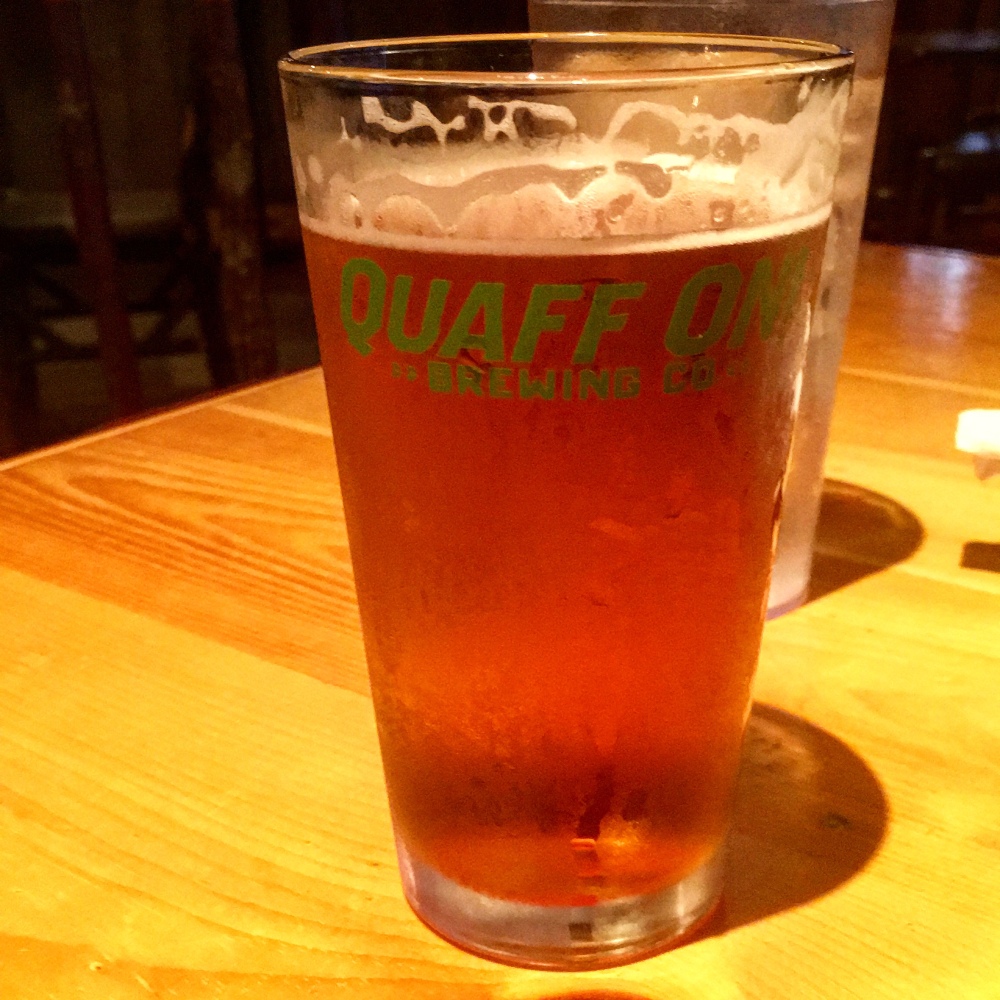 Our dinner was fantastic. Those pulled pork nachos and a five-cheese pizza hit the spot. So did the two Quafftoberfest marzen-style beers I had, as well as my wife’s Bahama Mama. Muy bueno. I wanted to take a 4-pk of Quaff-On Breweries beer home with me. Something I couldn’t get 3 1/2 hours north. So I decided their Peanut Butter Busted Knuckle Porter sounded fantastic. They didn’t have any warm 4-pks, but the gal at the bar told me as long as the cold ones didn’t get any warmer than room temp they’d be fine. I figured that was good enough for me, so we bought it and headed back to our Inn in the woods.

We returned to the Canyon Inn and I pulled that 4-pk out of the back of the vehicle. As I stood there, my wife walking from the driver’s side to the back I heard what sounded like glass hitting pavement. That’s when I realized my beer had left its home in the cardboard carrier and landed on the Canyon Inn parking lot. One bottle broke immediately, a very clean break at that. The bottom of the bottle broke clean off and my peanut butter porter splashed all over my wife and the back of our Ford Flex. The amazing thing was that the other bottle never broke and there were still two bottles in the carrier, which I was still clutching, but with my arm squeezing it to my body. The bottom of the carrier came completely undone by the precipitation of the bottles sweating. I didn’t picture myself on the ground picking up glass after our fantastic dinner, but there I was doing just that.

After I discarded the bottle remnants in the outside trash can we made our way back to our room. My wife got out of her porter-soaked clothes and we retired to our small bed and watched 45 minutes of commercials an 15 minutes of a movie. Then we had an uncomfortable night of sleep in our tiny bed, located in our tiny room.

The next morning we ate breakfast at the illustrious Canyon Inn restaurant and were immediately relieved that we hadn’t stayed for that chicken pot pie. We hit the road and made our way back to home sweet home by 1pm where our miniature schnauzer was ever so relieved to see us(as much as we were relieved to see him.)

It’s never easy telling your kid goodbye for what could be a month or two(or longer). As my oldest gets on through the school years it becomes easier, though. Not because I won’t miss her, but because I see how much she thrives on her own. At home it’s easy to fall back into patterns of co-dependence. And when you’re stuck because of a pandemic and forced to co-exist in the household you essentially left behind five years ago it’s hard to get back into those grooves without a few hiccups. Since she was 16 my kiddo has been doing her own thing, with the exception of holidays and summers. It’s hard to see her move on, but I’m happy that at least for now she can get back to the life she’s created away from us.

Another year on and we keep moving. Both literally and figuratively. Here’s to school staying in session, kids moving on and growing emotionally, and no more exploding beer. 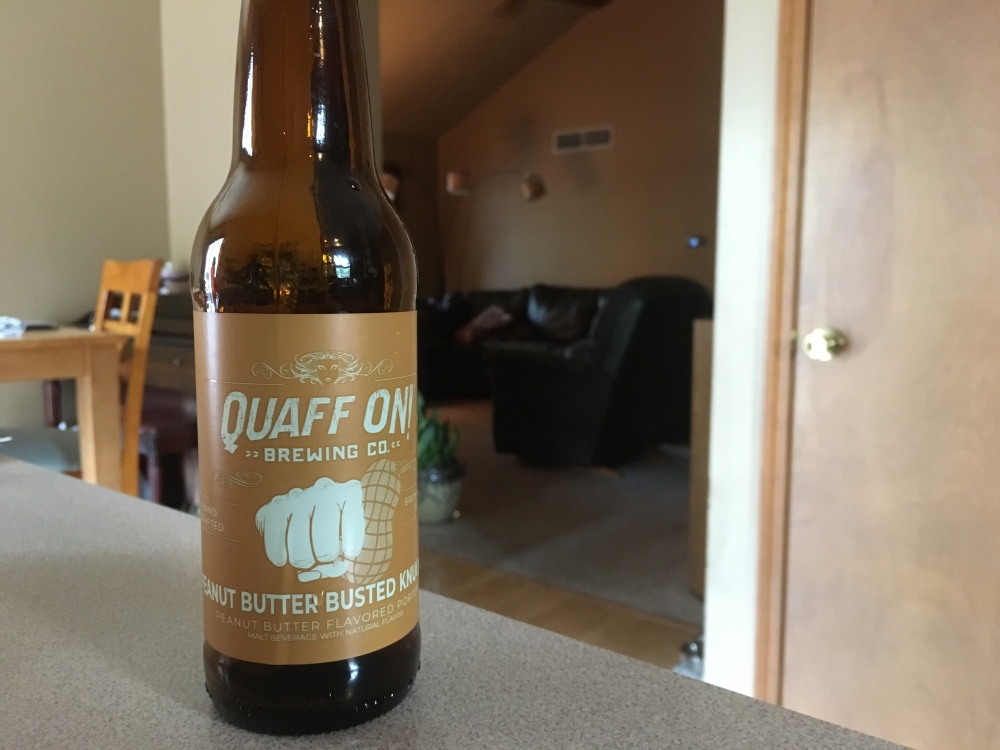