Musician/composer Steve Moore recently released his latest solo album titled Beloved Exile. This is his first solo album since 2013s Pangaea Ultima, and first full-length released with Temporary Residence. If you’re not familiar with Moore, he’s been part of heavy synth/prog rock duo Zombi(along with drummer/keyboardist AE Paterra) for over 15 years. Besides his work in Zombi, Moore has remixed artists, started a synth pop duo called Miracle with singer/multi-instrumentalist Daniel O’Sullivan, and began scoring films and television several years ago. Movies like The Guest, Cub, The Mind’s Eye, and Mayhem were made all the better with Steve Moore’s distinct composing and arranging style. If you get down to it, The Guest is one of the best modern synth scores to come out in a decade. It’s as much a character as Dan Steven’s David Collins.

With Moore’s latest long player he creates a collaborative wonder, working with musicians Emel Mathlouthi, Mary Lattimore, and Jeff Gretz, as well as Mountain Goats’ John Darnielle. The results are Moore’s most diverse group of songs yet, leaving his more interstellar song cycles for a more organic set of tunes.

I got the chance to ask Steve Moore a few questions about Beloved Exile, and he was gracious enough to answer them. 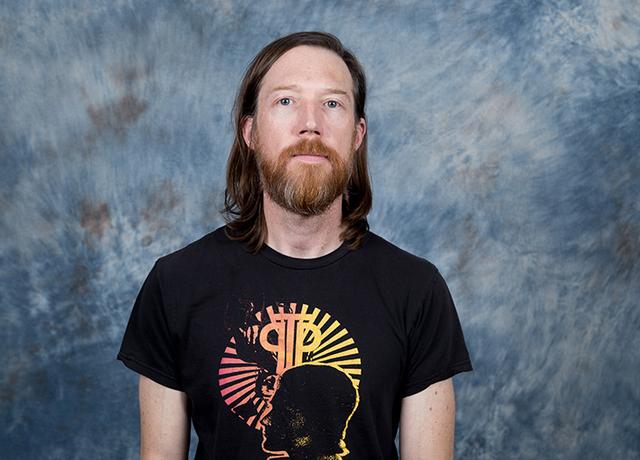 J. Hubner: Let’s talk about your new album ‘Beloved Exile’. It really stands apart from most of your other work. Dark and mysterious, but in a more organic-sounding way. You’re collaborating with such a unique and amazing group of artists, including  Emel Mathlouthi, Mary Lattimore, and Jeff Gretz in the studio.

How did all of you come together for this record?

Steve Moore: I had Mary in mind for these tunes from the beginning. We’d been talking for years about working together on something and so I knew I wanted to leave lots of space with what I was doing. And while I was working on this album I was helping with some additional production work on Emel’s new record, that’s how I was able to get her involved. And Jeff is an old friend who I always turn to when I need some auxiliary percussion. I’m very grateful that scheduling worked out – these are some of the busiest musicians I know.

J. Hubner: What was the writing and recording process like with everyone? Were you starting tracks and then sharing music files with everyone, or was it a studio collaboration with all the players together in one space?

Steve Moore: Everything was done remotely. I recorded the foundations of these tracks, then sent them to Emel, Mary and Jeff. They recorded their ideas and sent them back to me where I added some additional parts and built the final mixes.

J. Hubner: Did you know for this record that you wanted to do something different? Go a different direction sonically and compositionally?

Steve Moore: For sure. I think with each album I try to do something at least a little different from what I’ve done before, but with this one I really wanted to branch out and work with new sounds.

J. Hubner: You also have John Darnielle coming up with your song titles and album title. How did you two get connected?

Steve Moore: We’re mutual fans. Years ago he asked Zombi to open for The Mountain Goats on tour. We weren’t able to do the tour but we stayed in touch.

J. Hubner: Did John come up with titles first, then you composed around them? Or did he come in after the tracks were done and let the music lead his pen, so to speak?

Steve Moore: The songs came first. I tried coming up with titles but didn’t have any luck. So I thought why not have an actual writer do that. John was the first and only person I thought of and fortunately he was able to do it. I sent him the tracks and he sent back the titles.

J. Hubner: This is your first full-length with Temporary Residence. How long have you been working with them now? Will Relapse still be involved with your soundtrack releases?

Steve Moore: I’m friends with everyone at TRL, I worked with them on a number of projects now – I’ve remixed a few of their bands and produced Maserati’s VII album, which they released. Also Zombi did a split with Maserati on TRL, and the Moore/Majeure split. I’ve wanted to do a solo record with them for a while, I’m glad it worked out for this one. Definitely will be releasing soundtracks on Relapse in the future.

Beloved Exile is available now via Temporary Residence. Grab it on vinyl or digitally here.