Spoiler Alert : If you have not watched Halt and Catch Fire and plan to then please avoid this article as there are spoilers. -The Management

No show has hit me quite like Halt and Catch Fire. There was something quite brilliant in its story arc, casting, blending of the factual and the fiction, its spot-on performances, the soundtrack and the score, and most of all how it has your goddamned heart in its hands before you even realize it. It fools you into thinking you’re watching a technical drama about the beginnings of the personal computer age back in the early 80s. It fools you because what it’s really about is human connection amongst analog creation. Throughout the series you’re presented these characters, all of which are pieces to a much larger tapestry. A tapestry you think is business and technology, but what that tapestry really is, is love and family. Friendships, heartaches, growing, invention(of both the commodity variety and the personal), falling apart, finding yourself, hurting, loving, losing, winning, and through it all finding where you need to be in the end.

The show centers around a small group of tech-savvy folks back in the early 80s Dallas-Fort Worth area that come together in a small electronics company, Cardiff Electric, and take that company(unwittingly) into the personal computer world. The show ebbs and flows with these characters, that include the man with the vision Joe MacMillan(played by Lee Pace), computer engineer Gordon Clark(played by Scoot McNairy), tech prodigy and code writer Cameron Howe(played by Mackenzie Davis), Gordon’s wife and computer engineer Donna Clark(played by Kerry Bishe), and senior VP of Cardiff Electric John Bosworth(played by Toby Huss.) With these five characters, four seasons evolve around them(as well as incredible supporting cast throughout.) We see them excel at their technical talents, while fail at their personal relationships. They come together, fall out, sometimes completely crash and burn, but all of them find some sort of redemption in the end. 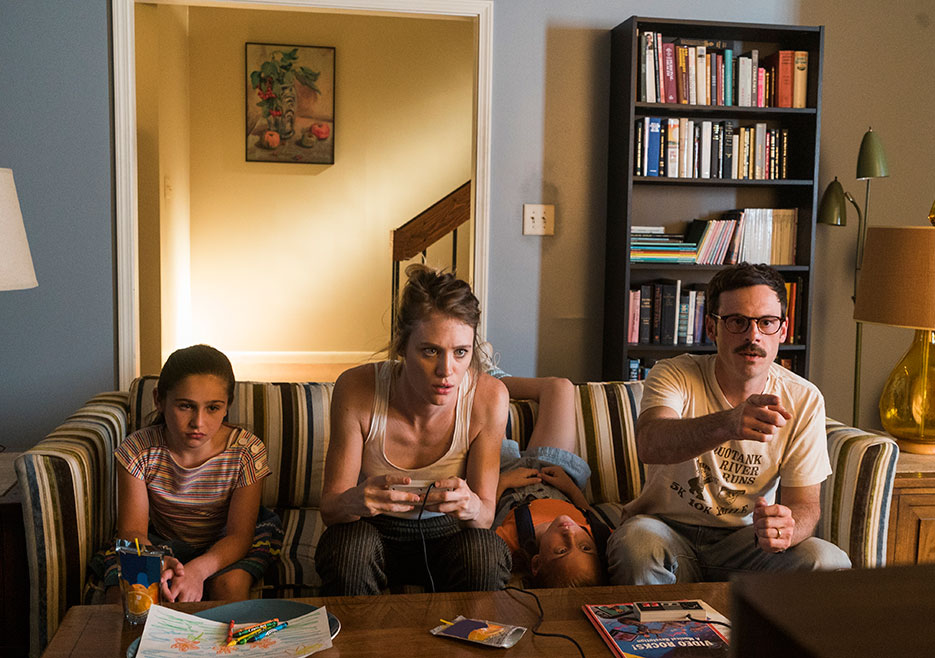 With the backdrop of the personal computer world, we get the feeling that we know this story. It’s as if we’re getting some behind-the-scenes narrative of those early days of IBM, Apple, Commodore 64, and all those other names that donned white and cream-colored boxes that sat upon a desk in the family den as kids of the 80s. Yet each venture these characters embark upon are completely the creation of series creators Christopher Cantwell and Christopher C. Rogers, as well as their team of incredible writers and contributors. That these characters not only engage us emotionally, making us invest in their lives and care about what happens to them, but sell us on what they’re doing in the computer and technology world, only goes to show just how brilliantly acted and written this show was.

Each one of the main players take on serious emotional change and growth throughout the four seasons Halt and Catch Fire ran. The fact that you start out not liking certain characters, and then by the end you can’t imagine not seeing them again on another episode is a testament to the acting and writing(once again.)

Gordon Clark started out as a somewhat bitter, beaten-down, mildly alcoholic computer engineer who seemed to feel as if he lost his chance at greatness. His decisions, actions, and general curmudgeonly demeanor really puts you off those first two seasons. You feel bad for his wife Donna, as well as their two young daughters. And everyone that works with him(and eventually for him in his new computer-building business.) But there’s a gradual change in his character. You see him coming to terms with changes(both in his health and personal life), and by the last season McNairy turns Gordon Clark into this almost Buddha-like character. He becomes comfortable in his own skin, and at peace with whatever may come at him. It’s a beautiful character arc that absolutely moved me. I haven’t been that affected or moved by a character in a very long time.

Now just because McNairy deserves the MVP of Halt and Catch Fire, doesn’t mean there weren’t other incredible performances. Christ, everyone was just amazing on the show. Lee Pace’s guru/shuck and jiver in a three-piece suit Joe MacMillan had so many facets to him that a show could’ve been based just on the guy’s moods and personalities. He wasn’t a builder of machines, but a builder of ideals. He was the seed that would grow with the help of those he surrounded himself with. MacMillan comes across as the smartest guy in the room. Not because he was, but because he knew who to impress and inspire in that room. He was as much a motivational speaker as he was CEO material. He was also a deeply wounded boy that wanted nothing more than to impress his IBM-rich father(or maybe bury him.) His many wild aspirations, spur of the moment turns, and emotional bridge building(and in turn burning of those bridges) is the track to which the show travels along.

Mackenzie Davis as Cameron Howe, the punk-inspired, idealist coder and gaming visionary is the emotional spark that puts Joe MacMillan in motion, both emotionally and otherwise. She sometimes comes across as his muse, while other times those roles are switched. Cameron gets lost in her ideas and game writing, and later proves to be everyone’s favorite boss when she and Gordon’s wife Donna start their own online gaming community called Mutiny. While she is the ultimate game writer and coder, she’s not really boss material. She can’t see growing the company, as something special will be lost. She’s another character that you see grow exponentially throughout the series. You also see that spark of creativity die in her eyes a bit because of what she sees as betrayals from those she loves and cares for the most.

One of my other favorite characters was Toby Huss’ John Bosworth. At the beginning I wasn’t sure what to make of him. He comes across as the old school blowhard southern gentleman. Cracking jokes, sipping bourbon, and generally being a good old boy in a nice suit. But after trouble with the law, as well as being separated from his family, Bosworth finds a new family with Cameron and her crew of misfits at Mutiny. Toby Huss is nothing but a revelation to me. He brings to this southern gentleman a longing for family that comes through in his care and concern for the daughter he never had in Cameron. He’s the loudest guy at the party telling jokes and schmoozing with all the golden belt buckles, but he’s also the saddest guy in the room wanting nothing more than to spend some time with his estranged son and his family. Huss is one of those actors that you can’t quite place, but you know you’ve seen him around for years. He brings to Halt and Catch Fire a presence of authority and parental concern. He’s the scout master and den mother to a group of eclectic, eccentric, intelligent, and highly dysfunctional misfits.

There are so many great characters and performances on Halt and Catch Fire that I could go on for a thousand more words about them. Kerry Bishe, Annabeth Gish, James Cromwell, Anna Chlumsky, Manish Dayal, Susanna Skaggs, Kathryn Newton, and nearly everyone that helped push the show along made it what it was.

The other MVP would be Paul Haslinger. Haslinger scored the series with a deft touch and subtle nods to the 80s computer age. With the series beginning in 1983, Haslinger uses synthesizers as his main instrument to stunning effect. Swelling waves of synth and pulsating electronic notes compliment the scenes to perfection. With his own storied musical career as a member of Tangerine Dream(joining in 1985), he learned from the best. He worked on several soundtracks with Froese and company, a total of 15 albums in just a five year span, before embarking on his own musical journey. His work on HaCF is very reminiscent of Tangerine Dream, but to my ears more like the subtle, darker tones of Risky Business and Firestarter. Haslinger captures both the emotional rollercoaster of these characters interactions and tribulations, but also the mania of their creativity and professional ups and downs. Haslinger’s score is indeed a character unto itself.

Haslinger handled the incidental pieces, while the soundtrack is peppered with great 80s alternative music. Boomtown Rats, The Vandals, The Clash, The DBs, and Bronski Beat all go to make you feel like you’re listening to a mix made by a cool older sibling(or just that wiser, darker kid in your Geometry class.) Using lesser known(but still great) songs from the era gives the show even more credibility.

The show’s theme music was in fact not done by Paul Haslinger, but electronic artist Trentemøller. The track, “Still On Fire”, is on the Danish musician/producer’s album Lost. The song is a glitchy slice of industrial groove and electro punk attitude that solidifies the iconic status of Halt and Catch Fire.

On a random Friday night in the winter months the wife and I decided to hit play on this show called Halt and Catch Fire. We began watching A Ghost Story but I’d decided that wasn’t going to be a good Friday night viewing experience with a slice of pizza. So after searching thru the Netflix queue I came across this AMC show that I knew nothing about. Halt and Catch Fire. I assumed it was about military espionage or something(I’m not a computer guy, so I had no idea what HCF meant.) A random click turned into the wife and I staying up till 1am binging a show that completely bowled us over. We had burnt thru the series in under 3 weeks, watching as much as we could. And when the last episode ended we mourned. Not because it didn’t end where it should, but because it ended just as it should. Simply and beautifully.

Selfishly, we wanted just a little more time with them.

7 thoughts on “I Need A Little Time : The Brilliance of Halt And Catch Fire”