It was October of 1991. It was a Tuesday which meant it was new release day. I’d gone on a field trip with my Art & English class to Indianapolis to visit the Indianapolis Museum of Art as well as a synagogue(we’d just finished reading Chaim Potok’s ‘The Chosen’.) The bus got back to the school around 6pm and I sprinted to my car for my escape. I had two goals: give my girlfriend the cool and colorful hair tie I bought her at the museum and get to Video World and pick up Soundgarden’s new album Badmotorfinger. Both were important, but one was essential.

I can remember the first time I’d heard Soundgarden was way back in 1989. I think my friend and I had seen the “Hands All Over” video on 120 Minutes and immediately thought “Who is this??” Back then we couldn’t just jump on Google and find out the band’s life story in 2 minutes. It took foot work and real research. Combing through magazines and inquiring at record stores. It was work, dammit! So on a trip to Fort Wayne for my birthday day with said friend and an older friend of ours that was out of school and could drive we hit up Wooden Nickel(a favorite record store back then) and I located a copy of Soundgarden’s Louder Than Love on cassette(the preferred method of music listening at the time) and we made our way back home. Louder Than Love was unlike anything I’d heard before. Up to this point I’d only recently been getting away from the teased hair and sexual innuendos of the Sunset Strip crowd but diving head first into the likes of Rush and instrumental guitar music like Joe Satriani, Yngwie Malmsteen, and Steve Vai. Soundgarden stood in stark contrast to those albums. Louder Than Love, to my ears, wasn’t punk rock and it wasn’t heavy metal. It was its own beast. Songs like “Hands All Over”, “Loud Love”, “Get On The Snake”, and “Big Dumb Sex” had an almost pop feel, but pop done up in rusty age and a bloody smirk. But then you get to songs like “Gun”, “Full On Kevin’s Mom”, “Ugly Truth”, and “I Awake” and things feel dingy and dark. There’s an oppressiveness to those tracks that make you feel like flipping on the light switch and keeping a conversation going through the night so you don’t have to shut your eyes. The production wasn’t necessarily lo fi, but it was somewhat muted; muffled even. It was an eye opener to my 16-year old self. It was also the first time I ever got my older brother to get into a band, instead of vice versa. That was a proud moment for me.

I’d been dipping my toes in the Seattle waters with bands like Mudhoney, Screaming Trees, Alice In Chains, and the newly released Ten by Pearl Jam since late 1989. I was an early follower of the Seattle scene, having thought I’d found my own little secret musical world(that secret world would blow up in the fall of 1991.) I’d loved Temple Of The Dog the year before as I was a big fan of Mother Love Bone’s Apple album, so I was ready for Badmotorfinger. The first single, the wonderfully-titled “Jesus Christ Pose”, didn’t disappoint. The sound was more aggressive and metal than anything off Louder Than Love, and the production was spot-on. The video was a melee of psychedelic desert shots with Chris Cornell doing a fine job with the menacing faces while colors shone and the film skipped and blipped like a strobe light. It was the quintessential middle finger to religion and the hypocritical line towing that’s involved with organized religion. I knew I was in for a treat with this album, because once I finally got to really listen to Badmotorfinger it felt like a re-wiring of my brain. From the opening salvo of “Rusty Cage” to the the crashing blow of album closer “New Damage” I was enthralled and won over. I felt like a new convert to some new musical language. I wanted to know this world more. Everything that came before it sort of felt trite to my ears. Musically Soundgarden had created this forward-thinking metal that while may not have been “new” per say, but they seemed to have found a way to convey something new within the confines of the classic rock and roll tools. 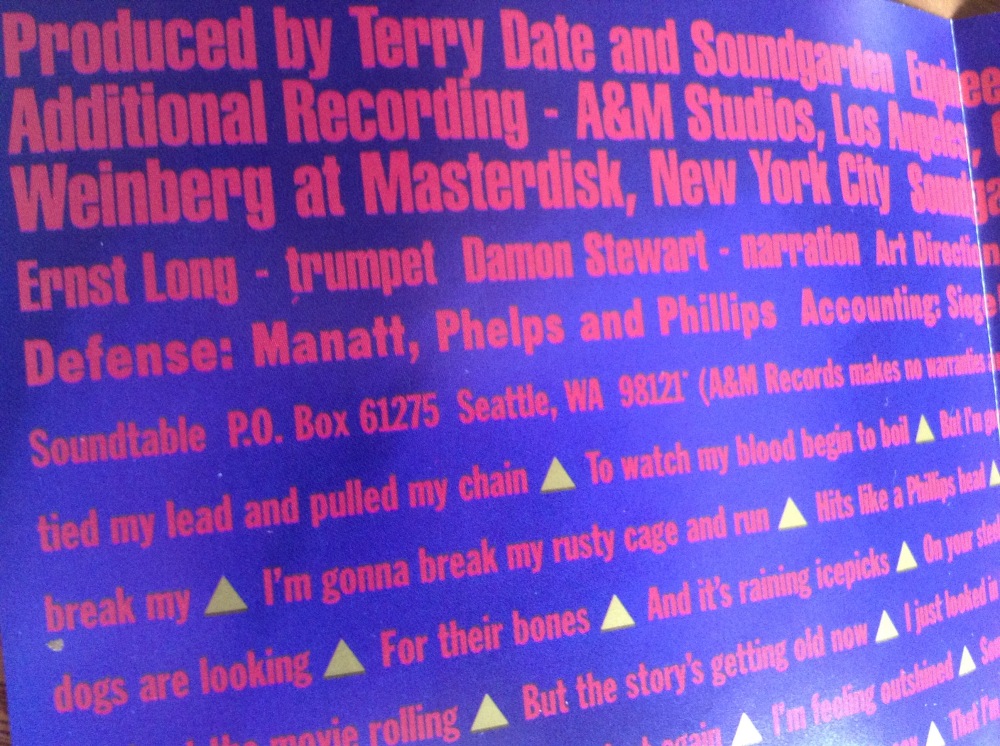 “Rusty Cage” is one hell of an opener. That opening guitar felt new and alien in a world overrun by pop metal. Ben Shepherd’s bass playing was also a standout on this track, which was new to the Soundgarden sound as prior to this the bass seemed to linger in the background. Lyrically Chris Cornell really went to another level. “Too cold to start a fire/I’m burning diesel burning dinosaur bones/
I’ll take the river down to still water and ride a pack of dogs” felt like poetry as much as lyrics. Cornell could really paint some amazing visuals with his words, as on the next song “Outshined”. “I got up feeling so down/I got off being sold out/I kept the movie rolling/But the stories getting old now” and “I’m feeling California and feeling Minnesota” sort of defined that “what does any of this mean” vibe we were all feeling in 1991. Soundgarden were still writing songs as anthems of the disenfranchised on this album. With Superunknown the lyrics began to point inward. They began to deal with the “I” as opposed to the “we”.

Elsewhere, “Face Pollution” was a blistering track that barreled through the speakers like a freight train from Hell, while “Drawing Flies” was just this vitriolic anthem. “Searching With My Good Eye Closed” to this day knocks me on my ass. It’s this dirge-y, psychedelic monster of a song. Part Black Sabbath and part new age metal. It’s just incredible. “Holy Water” sounds like post-apocalyptic blues. “Holy water on the brain and I’m losing sleep/Holy bible on the night stand next to me” Cornell sings over massively d-tuned guitar playing a bluesy guitar riff that dangles into the doldrums.

I bought this on cassette, but in 1992 a special edition of the album was released on CD called SOMMS which stood for Satan oscillate my metallic sonatas. It had the original album plus an extra CD that contained some covers, one non-album track, and a live version of “Slaves and Bulldozers”. The covers included Black Sabbath’s “Into The Void(Sealth)”, which was Sabbath’s music with the lyrics replaced with words of protest from Chief Seattle. There was also a cover of Devo’s “Girl U Want” and the Stones’ “Stray Cat Blues”. There was an excellent non-album track called “She’s a Politician”. This was the premier version of the album. It’s still a prized possession of mine. 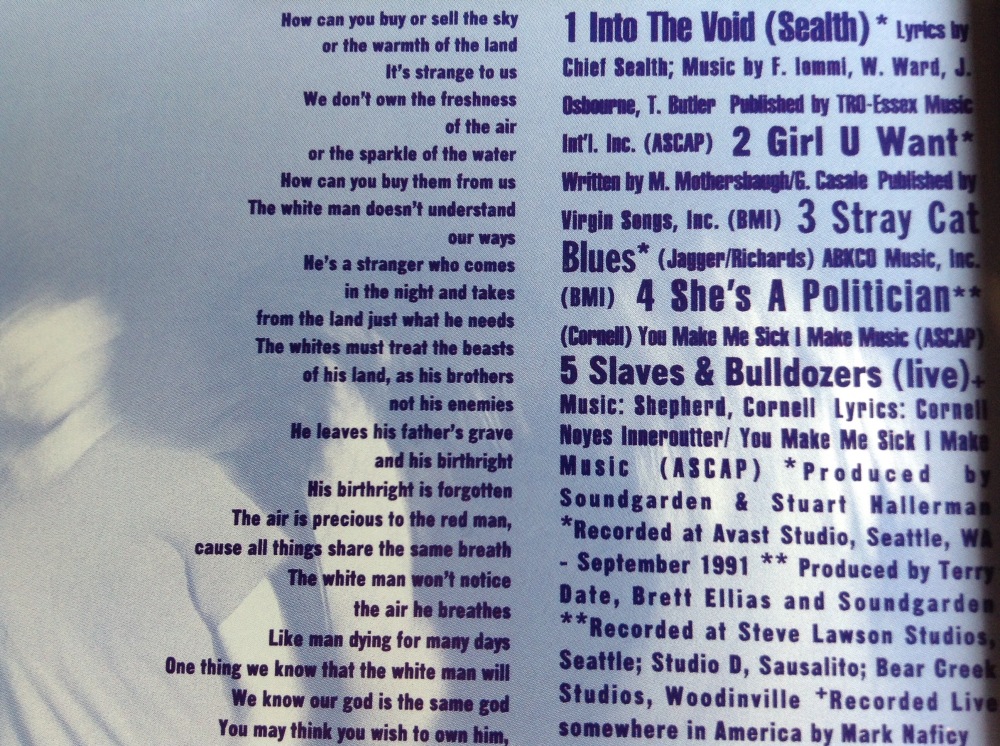 Besides maybe Thayil’s “Room A Thousand Years Wide” I don’t think there was a bad song on this record. I’ve been listening to it all week and I can say that with confidence. And even after 27 years my favorite song is still “Mind Riot”. It was a peek at what Chris Cornell had in store for us on future albums, both with soundtrack work(“Seasons” on Singles S/T), Soundgarden, and his solo albums. He had such a unique way of building chord structures in his songs and this was no exception. It was heavy but also very melancholy, and the lyrics are quite telling. “Candles burning yesterday/Somebody’s best friend died” he sings in the chorus, while one of my favorite lines is “I was crying from my eye teeth and bleeding from my soul/ And I sharpened my wits on a dead man’s skull“. This song, for me, is the shining example of what this band was about. They could give us a beautifully unique and catchy song in such a creative and one-of-a-kind way. That was the result of the Cornell/Thayil/Shepherd/Cameron magic.

In the wake of Chris Cornell’s death, I’ve found some solace in revisiting his work. He’s left a treasure trove of music for us to enjoy and to keep him singing in our lives for years to come. Superunknown put Soundgarden in households worldwide, but Badmotorfinger put them in my head and heart forever.