Wojciech Golczewski’s The Signal could possibly be the most beautiful collection of electronic/synth pieces you’ll hear all year. Golczewski captures that feeling of awe 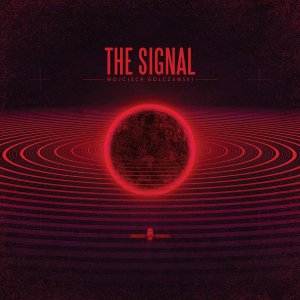 one might feel staring out into the blackness of space for the first time. An overwhelming sense of peace and solace as you realize just how small we all are in the scheme of things. The Signal is also a prequel record to Golczewski’s first album with Death Waltz Originals, the excellent Reality Check. You do get a feeling of some kind of emotional arc throughout both albums, of which The Signal is the beginning of the story. It’s pared down sound-wise from its predecessor, but still very much full, ornate, and pristine in its sound. The Signal is simply exquisite.

Here’s the backstory to The Signal: “A sole rocketeer lives through her daily routine on a solo crewed space station orbiting a red dwarf star. One sol, the station is hit by a magnetic storm carrying a signal. The transmission provokes the decision to leave the station and start a journey into the unknown, looking for answers on the past, present and future of the species.”

There’s two composers that immediately come to mind while listening to this record: Vangelis and Jean-Michel Jarre. I hear a lot of their work sewn into Wojciech’s synth patchworks and emotional movements throughout. “Orbiting” puts visions of space and astronauts as it rides on a beautiful synth line. Golczewski never falters in the emotional heft, from his solo records to his film work in 400 Days, We Are Still Here, and Dark Souls. There’s a lot of really great people making sci fi and horror-based heavy synth music, but at times the emotion is left off to the side in favor of Berlin School mimicking. Wojciech Golczweski seems committed to emotional heft every time out. “Childhood Dream” almost has the vibe of an early 80s pop track. In fact, The Signal is the most pop-affected album to date from Wojciech. It’s the perfect mix of catchy hook and heady composition. “Robotic Assist Module” puts me in mind of Disasterpeace’s work on the Fez Soundtrack. There’s a wee feel to it, but in a sweetly melancholy way. It’s not saccharine by any means.

This record flows wonderfully and leads up to the epic closer “1348000 Miles”. It’s drone-y nature and emotional ambivalence almost feels like a tragic ending to our sole rocketeer, which leads into Golczewski’s Reality Check. That final track sits in contradiction to the rest of the album’s woozy synthscapes. It lingers in your ears long after its fade out.

Wojciech Golczewski has proven to be one of the premier composers working today, and with his records Reality Check, End Of Transmission, and now The Signal he’s shown he can create original musical worlds without the help of a film script. He does just fine on his own.

5 thoughts on “Wojciech Golczewski : The Signal”