Paul Pope is the kind of writer and artist that seems to be as much a rock star as he is a comic book writer. Not like the cheesy, machismo-type of rock star that wears spandex, primps his hair, and exudes arrogance for miles. More like the kind of rock star that has something to say, and when he says it it’s important. The quiet, brooding type of rock star. In his graphic novel The One Trick Rip-Off he even uses Nick Cave as an inspiration for one of his characters, Jesse James. I think what that says about Paul Pope is that he’s not the typical writer. He’s someone working on the fringe, yet he’s never run from success. He’s just found it on his own terms, man. When you’re trying to be unique in the world of comic book writing and illustrating that’s a dangerous business model. But if you can stick to your guns and continue to push yourself and your art and actually pay the rent, then you’ve achieved something.

One of my closest friends told me when I first started getting into graphic novels that I should check out Paul Pope’s Battling Boy books. Of course I never listened and instead ordered his Paul Pope’s Batman : Year 100 and was completely blown away, by both the story and the artwork. Pope’s got a very unique art style, and I think that might be from his years living in Japan and working for Kodansha, the leading Japanese publishing house and worked on several manga books. He said of that time that he never looked at any American comics, with the exception of a handful of his friends self-published books. And his writing seems to veer towards outcasts and characters on their own. I don’t know the guy, so I don’t know if he himself is or was a bit of an outsider, but by his impressive list of clients I’d say he’s not THAT much of an outsider. If anything, he can relate to them.

The last book of his I picked up was The One Trick Rip-Off. It’s the story of Tubby and Vim, two lovers that want to escape their lives and start over. To do that all they have to do is rip off Tubby’s pals in the One Tricks, one of LAs most dangerous street gangs. Why are they called the One Tricks? Well that one trick is that they can use mind control on people. If Tubby says a snake is choking you, then you think a snake is choking you and you die. Kind of a Jedi mind trick thing, I guess. There’s not much to the story, really. It’s nothing too heavy or anything, but the simplicity is appreciated. Boy and girl love each other and want a new life for themselves. They decide to steal from bad guys and things don’t quite go as planned. There’s double crosses, near misses, and epic fights. Oh, and Thai food laced with morphine. It has a real True Romance/Pulp Fiction vibe. It was written in 1995, right when Quentin Tarantino was blowing up in a big way, so the noir-ish aspect of his films were an influence on Pope’s story. He was also pulling from Raymond Chandler and Dashiell Hammett, which is woven into the backgrounds of illustrated gritty Los Angeles streets penned so wonderfully here by Pope and colored beautifully by Jamie Grant(the original run was in black and white.)

I can see where some might find the story here a bit thin, and I think this was really at the start of Paul Pope’s upward trajectory. His writing only got better from here, but for a book like this I think the story was well suited to be more of an impressionistic journey. The art here is what sells this for me. It’s a brooding story that finds its footing in the two troubled lovers Tubby and Vim, their search for a new beginning, and the drawings of Pope that show us their dirty, messy world.

When I look at this book and Pope’s style here, it reminds me a bit of early Ralph Bakshi films. Stuff like Wizards, American Pop, and Fire and Ice come to mind. I’m sure Paul Pope would despise that comparison. His influences are probably far more intellectual and storied in the comic book world, but there was always something about Bakshi’s work that felt very visceral to me. A rough sketch come to life. Something very organic and sexual in nature. Not perfect, but gorgeous and alluring nonetheless. That’s what I get from Pope’s work. It’s raw. 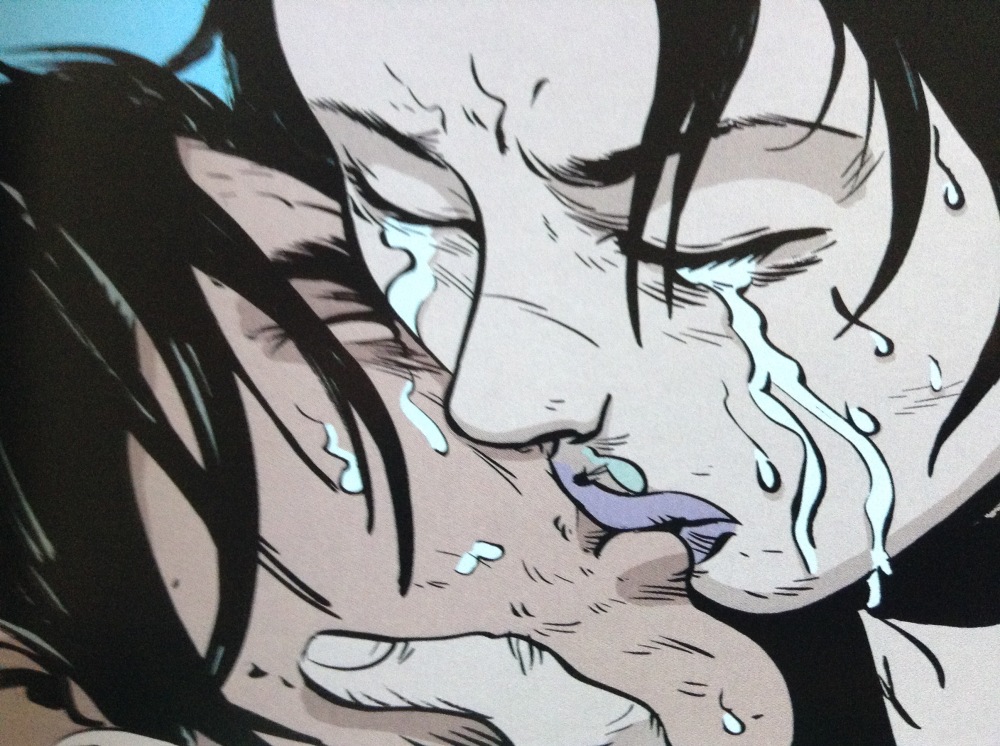 This is only my 3rd outing with Paul Pope, but one of my favorite books to look at. I read it, of course, but looking at it is amazing. I picked up the special edition The One Trick Rip-Off/Deep Cuts HC, which like I said earlier colors in the black and white book to stunning effect. There are also several early works of Paul Pope’s included which gives you a glimpse of where Pope started. It’s not essential, but I’m glad I’ve got them to go back to once in a while.

Along with Batman: Year 100 and Escapo, Paul Pope is batting 3-0 with The One Trick Rip-Off. I think I might jump into Battling Boy next. I also want to track down hardcover copies of Heavy Liquid and 100%. All in due time.

All in due time. 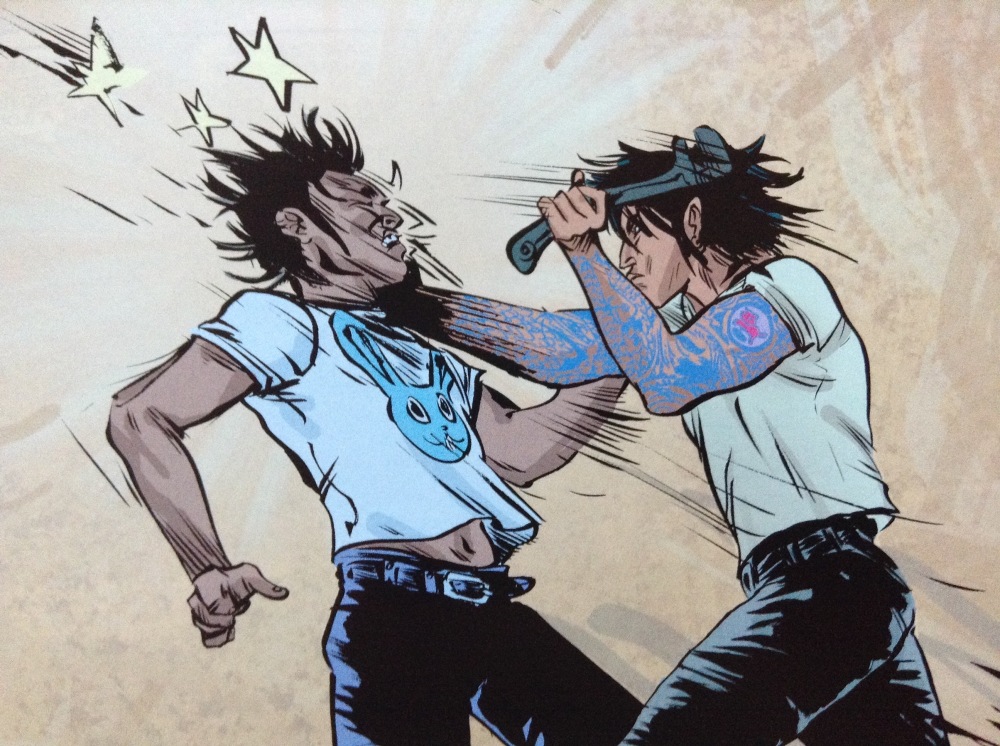 5 thoughts on “Tubby and Vim : Paul Pope’s One Trick Rip-Off”