Okay, so here’s some alternative facts about me:

I’m 6’6″, 255 lbs with long wavy hair. I can bench press 455 lbs and can dead lift 575 lbs. I own 40,000 acres of land and I’m what you’d call a gentleman farmer. I dedicate 30,000 acres to growing produce that I give away free to those that need it. The other 10,000 acres I use as miniature schnauzer farms where I make sure the endangered miniature schnauzer can repopulate so they can one day take their rightful place as supreme leaders of Terra. When I was 15 years old I was a roadie for a Christian rock/funk band called Lovewar. My great-grandfather owned a record shop on Hollywood and Vine and hit it big in California oil fields in the 60s and for a short time I was the lead guitarist for the 80s rock band Cinderella.

Since alternative facts don’t have to be factual, I’m standing by each and every one of those, umm, facts. Okay, okay, you got me. I wasn’t ever the lead guitarist for Cinderella, but I sure did dig that first album Night Songs.

Night Songs came out in 1986 and I remember getting the cassette right around Christmas break of that year. That previous summer I’d gone through both an AC/DC and Aerosmith awakening(the AC/DC phase continues to this day), so when I first heard “Shake Me” I was instantly reminded of both the Australian crew and the Boston crew. Cinderella seemed to be pulling from both of those bands and making a rather unique and heavy sound all their own. While most bands of the day were more about the European side of metal, pulling heavily from the NWOBHM, Cinderella seemed rather content to pull from earthier roots. Now at 12 years old I wasn’t really looking at it that deeply. I was just thinking “I like this.”

I’d yet to get into true heavy metal, speed metal, or even anything that would remotely be considered alternative. At just the cusp of becoming a teenager I just wanted music that was visceral, loud, and could maybe occasionally pull on the old teen heartstrings. Night Songs covered it all, really. Opening track “Night Songs” was like a cross between “Hells Bells” and “Mama Kin”. It was this doomy track that appealed to the working class dude. Of course I wasn’t a working class dude. But my older brother was. I’d see him come home from working 3rd shift, beaten down and wore out and the only thing that made him feel good was noodling on his electric guitar in his bedroom and cranking up some music on the stereo. In that way I got it. “Drinking gasoline”…yeah, that’s what hard working long hairs do, man. Cool. Of course then you have “Shake Me”, the naughty hit single with the video where hot women dance sexily making teen boys awkward and uncomfortable in a good way. Things are starting to get re-wired in your brain when you hit 13. Girls become something to pine for, not run away from. In all honesty, I never went through a “girls are icky” phase. I’ve always been a fan. I had a crush on a young lady from when we were in pre-school clear to the 4th grade when she finally moved away. Always a lover, not a fighter. So when you come across a song like “Nobody’s Fool” and you have your first real heartbreak, it’s a combination that creates hours of feeling sorry for yourself in your bedroom as the song plays on and on and on. 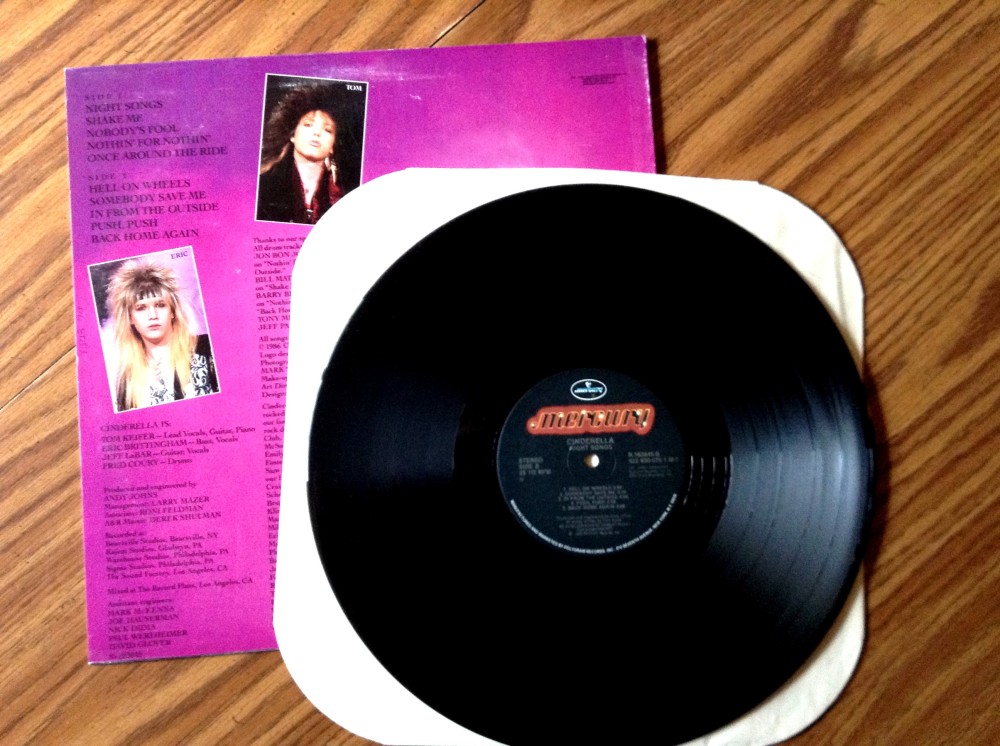 I think the one thing I’ve noticed going back and re-listening to this album after years is that it’s still a pretty solid album. So many albums of this ilk were loaded with filler that surround one or two good tracks between two sides. While Night Songs isn’t a classic, it’s a solid listen all the way through. Songs like “Nothin’ For Nothin'”, “Hell On Wheels”, and “Somebody Save Me” aren’t just cushion to fill out sides. They’re damn good tunes. Also going back and revisiting these guys I’ve come to the conclusion that Cinderella was a band that would’ve rather always stuck to jeans and t-shirts, much like Tesla did for their entire career. They seemed like a working class rock band that bent to the current Sunset Strip trends of raiding your sister’s closet and hitting the stage at the Whiskey-A-Go-Go. There’s some glammy strut in a song like “In From The Outside”, sure. But Tom Keifer seems like a guy that could hold his own in a bar fight. “Push Push” is pulling heavy from some serious AC/DC vibes. A nice mix of the Young brothers with some naughty Sunset Strip vibes. “Back Home Again” ends it all with a tip of the hat to Aerosmith’s “Nobody’s Fault”. A good head basher to end things on.

Maybe I might be regressing a bit hitting up all these old albums from my youth. That’s possible. One blogger pal even said as much. This may be true. Or maybe it’s an alternative fact. Or maybe it’s part truth and alternative fact. I will say this, Night Songs is still a pretty solid record after 30 years. Cinderella went the way of blues rock after this album and had a pretty monumental hit with “Don’t Know What You Got(Till It’s Gone)”. I liked Long Cold Winter enough. There were still plenty of girls to break my teenaged heart, so the big ballads and bluesy rockers were a welcomed reprieve from reality. But it didn’t keep my attention quite like that first time around.

Now if you’ll excuse me, I have some miniature schnauzers to attend to and some compact cars to lift over my head and toss like mere twigs.