-the action of transferring something or the process of being transferred.

-the redirection to a substitute, usually a therapist, of emotions that were originally felt in childhood (in a phase of analysis called transference neurosis ).

For me, Spoon is a band that delivers every time they put out a record. They just have this essence of cool about them. Singer Britt Daniel has swagger for miles and a soulful howl in his singing that elevates the music to a whole other level. His guitar playing is minimalist but says everything that needs to be said. There’s a post-punk quality to his playing that goes from jagged stabs of chords to eloquent noise. Drummer Jim Eno is the massive backbone of Spoon. His playing, like Daniel’s guitar work, is minimal but effective. He’s got a power behind his playing that you just don’t see much these days. Rob Pope, Eric Harvey, and Alex Fischel round out the current line up of the band, but Spoon has always been Britt Daniel and Jim Eno. 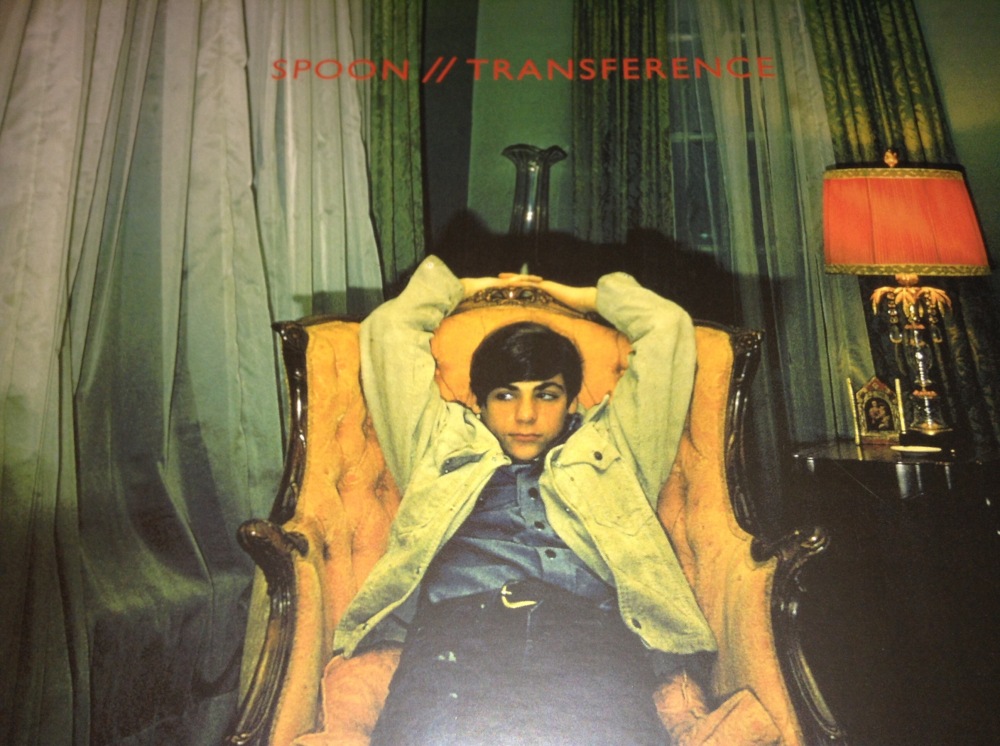 Back in January of 2010 the band released Transference, a sort of out of left field record that came out as a bit of a surprise at the beginning of a new year. Their previous releases, 2005s Gimme Fiction and 2007s Ga Ga Ga Ga Ga were seeing the band build on their minimalist approach to Wire and Kinks-inspired rock and roll to great effect. Adding more instrumentation and lightening up the darker corners with Brill Building pop sheen, Spoon were becoming pop confectioners of the highest order. So when they come out 2 1/2 years later with the minimal Transference it came as a bit of a shock. Everyone that loved the band up to that point didn’t really know what to make of it. It wasn’t like it was a bad album. It was just different. Rawer, less ornamented, and not nearly as pop inflected as the last two albums. So does that mean it’s a lesser album? I don’t think so.

This album came out at a time in my life when things were changing for me. A rough patch on the road we call life had pretty much stopped me in my tracks. You know how you lose sight of things? And your idiotic behavior and self-serving thoughts aren’t quite seen for what they are by you until you’re pulled out of your own headspace and can see how things really look? Yeah, well that was me in January of 2010. Those growing pains of a growing family, responsibility, and where you fit in that new world all get discombobulated. For me I lost sight of who I was and it took hitting a wall hard and fast to get myself back on track. Transference was the soundtrack to a cold, snowy January and a lot of desperate reflection for me. It’s minimalist approach and stripped down emotion hit me hard. What some heard as kind of basic and “meh”, I saw as this defiant statement. No window dressing or grand ornamentation this time around, just a hard look at chords, rhythms, and words coming together. In my mental state it was an album I needed to hear. While it wasn’t a panned record by any means, I think a lot of people just let it sort of go by the way side. An interesting, albeit non-statement of a record. For me, it was an uncomfortable look at what I’d let myself become and a starting point at redefining who I was as a person.

Up to that point I’d attempted to compartmentalize myself. I was a husband. Then a dad. Then a musician. Then this J. Hubner character. If you can live that way and not lose sight of your warm, gooey center then great. For me, I feel it’s an unhealthy way to live. Certain sides of you tend to get jealous and want more spotlight than the others. Most of the time it’s a side that shouldn’t take precedent. The id and ego having a field day, while responsibility sits in the rain in front of the school waiting to be picked up. I’ve learned that I am all those things, all the time. I don’t ever put away the dad hat, or husband hat, or musician hat, or me hat. I’m all those things. I’m a multiple hat guy these days. I have been for nearly 6 years. I’m a much happier person, too. There’s a writer hat I wear, too. That’s the one that I think truly saved me. Writing gives me an outlet whenever I need it. It lets me take all the thoughts, opinions, and gnarled sentences in my head and put them in some sort of sequence. It still may not make any sense, but at least they’re out of my head. At least I can move on to something new. 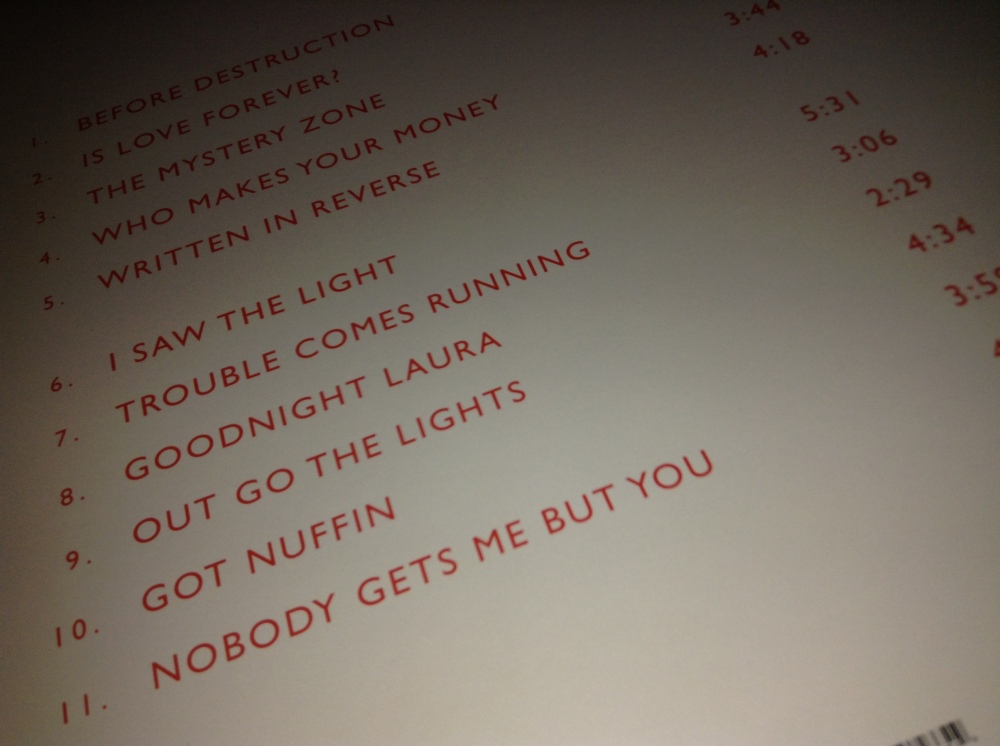 Opening track “Before Destruction” sort of felt like the opening paragraph in a novel about a character full of himself and in need of a “come to Jesus” moment. “Before destruction a man’s heart is haughty/Everyone loves you for your black eye/They feast on the abundance of your house/Your love”. I won’t say that sentence makes complete sense, but there’s something in there that resonated with me. It still does, but for different reasons. “Is Love Forever” followed with a two minute burst of jumpy pop paranoia. “I grew up in a supermarket it was there they told me/If they can’t find me they won’t leave without me now or ever/ All I need’s a word to get me started, all I need’s a look”. “The Mystery Zone” eludes to a place “where your dad’s not around” and “all the trouble you looked for all your life” you’ll “find it for sure”. “Written In Reverse” is a big rock and roll number, complete with Stones-y guitar riffs and Britt Daniel in full rock and soul form. Side two is slower in pace but packs a punch with the lo fi rocker “Trouble Comes Running”, the piano ballad “Goodnight Laura”, and the new wave funk of “Nobody Gets Me But You”. The best track on side B is the driving and desperate “Got Nuffin”. Each song seems to sway from hopefulness to desperation on Transference, and “Got Nuffin” is the peak of that desperation. “And I got nothing to lose but darkness and shadows/Got nothing to lose but emptiness and hang-ups” Daniel sings over a driving rhythm and patches of guitar noise.

Maybe it was the indecision and emotional aloofness that appealed to me so much back then. Listening to this album nowadays it feels like a band in a holding position. They seem to be looking to find a direction to head. Instead of just not doing anything they decided to put that confusion and indecisiveness to work. Transference is a record that to some may have sounded like a band right before destruction. To me it sounded like a band before construction. A band rebuilding. I needed to hear that then, as I was sort of a man nearing destruction. I’ve been constructing ever since.

I’m a work in progress, but there’s progress nonetheless.

7 thoughts on “Before Construction”