There are milestones you look forward to in the lives of your children. First words, first steps, first day of school, first best friend, sleepovers, learning to drive, high school graduation, college graduation, marriage, and then becoming a parent themselves.

Then there’s the milestones that parents look forward to because the parents themselves are interested in them. You want your kid to play sports or get into art or music or books or film because that’s what you were into at their age(and possibly your current age.) You basically want to create a mini pal that you can talk shop with in the middle of telling them to do their homework or clean their damn room.

In my heart of hearts, I believe what put all of my children on the right path were two things : Baby Einstein and The Simpsons. The mixture of higher education in children’s form, classical music, hand puppets, and the Simpsons’ writing team from 1990 through 1997 I feel helped mold my kids to think more freely, enjoy the finer things, and most importantly never settle for subpar entertainment. All of their tastes vary quite significantly now, but each has forged a very unique palate when it comes to films and music. I find that to be quite an accomplishment.

Of all my children my son and I are the most in line when it comes to enjoying the arts. From graphic novels to horror films to a vast appetite for different kinds of music(as well as being interested in making music), we have many shared loves when it comes to the arts. We began a path of horror film love years ago, probably on a night back in 2011 when he and his sisters and I watched Insidious one Saturday night. He was probably 6, and probably way too young to have been watching it, but sometimes you have to make that call as a parent. “Can my kid handle this? Yeah, he can.” And despite a couple moments where I thought he may have gone into shock he came out of it with a love for scares. I mean, we did have to stay up past midnight watching Billy Madison and Happy Gilmore to calm his nerves, but no regrets.

He’s since grown up and and has evolved into a well-mannered teen learning to drive, learning to play drums, bass, and piano(he taught himself Radiohead’s “Videotape” and “Karma Police” on the family piano over Christmas break.) He still has a deep love of horror and science fiction, as well as the comic books of Jeff Lemire, Scott Snyder, Tom King, and Jeph Loeb. And as we evolve our cinematic scope, we’ve entered the phase of mobster movies. It was inevitable, and I for one was ready to hit up some classic gangster flicks with my son.

Last year right after Christmas we watched Scorsese’s The Departed. I know a lot of folks were kind of on the fence with this 2006 gangster flick, but I thought it was great. A favorite of mine in the later-era Scorsese canon. Then in the spring of last year in the midst of lockdown we watched the masterpiece Goodfellas. I remember seeing Goodfellas in the theater when I was a teenager with one of my best friends. I’m still not sure how the hell we got into the theater as neither of us was 17. Anyways, it was great to be able to share the crime epic with my son.

So during Christmas holiday the boy and I decided to knock a few more classics off the list. My oldest bought me The Godfather Saga on Blu Ray for Christmas, so last Monday and Tuesday was a Coppola two-fer. We watched The Godfather Monday night, then followed it up Tuesday with The Godfather Part II.

It’s probably been 25 years since I’d seen The Godfather. I have to say it held up incredibly well. The cinematography, the performances, and the score was just stunning. Loved Jimmy Caan and Robert Duvall, as well as the amazing Marlon Brando as Vito Corleone. Seeing Al Pacino so young and doe-eyed was eye-opening, and a reminder of how much I love him as an actor(watched Dog Day Afternoon a few weeks ago for the first time.) And of course so many memorable and quoted lines from it. “I’ll make ’em an offer he can’t refuse”, “Luca Brasi sleeps with the fishes”, and “Leave the gun, take the cannoli” were just a few classics.

The Godfather Part II was about 25 minutes longer, but was so richly layered with going back and forth between what was happening in the 50s with the Corleone family moving into the gambling business and showing how the young Vito Corleone came into power. Robert DeNiro as young Vito was incredible, and showing how different his rise to power was compared to Pacino’s Michael gave the film an almost Greek tragedy feel. So many amazing supporting roles in part II as well. John Cazale’s Fredo, Lee Strasberg’s Hymen Roth, and Dominic Chianese’s Johnny Ola.

My wife and oldest daughter preferred The Godfather over The Godfather II, but my son and I both enjoyed Part II much more. It was long(very, very, very long), but the story was so much richer. So many more moving parts and details, and the juxtaposition between Michael and his father and how each ran their families(both blood family and his “business family”) made for that final shot to feel so much deeper and sadder.

We did end up watching The Godfather Part III, too. Now this isn’t the new restored version that just came out. This is the original that was released in 1990. I wanted to watch the original version first before I saw what Coppola did in his restored version. It wasn’t a terrible movie, but it was lacking in something. I love Sofia Coppola as a writer and director. LOVE her. But in this she was acting amongst giants and her chops just weren’t there. Some things felt a little over the top(the chopper scene, if you’re seen it) and just felt sort of rehash-y. Watching the films all so close together was interesting, as you saw so many of the actors from the first two pop up here 16 years later. The very noticeable missing actor here was Robert Duvall. He declined to return as family lawyer Tom Hagen. I feel he was greatly missed in this film and I think would have truly legitimized the film had he been in it. 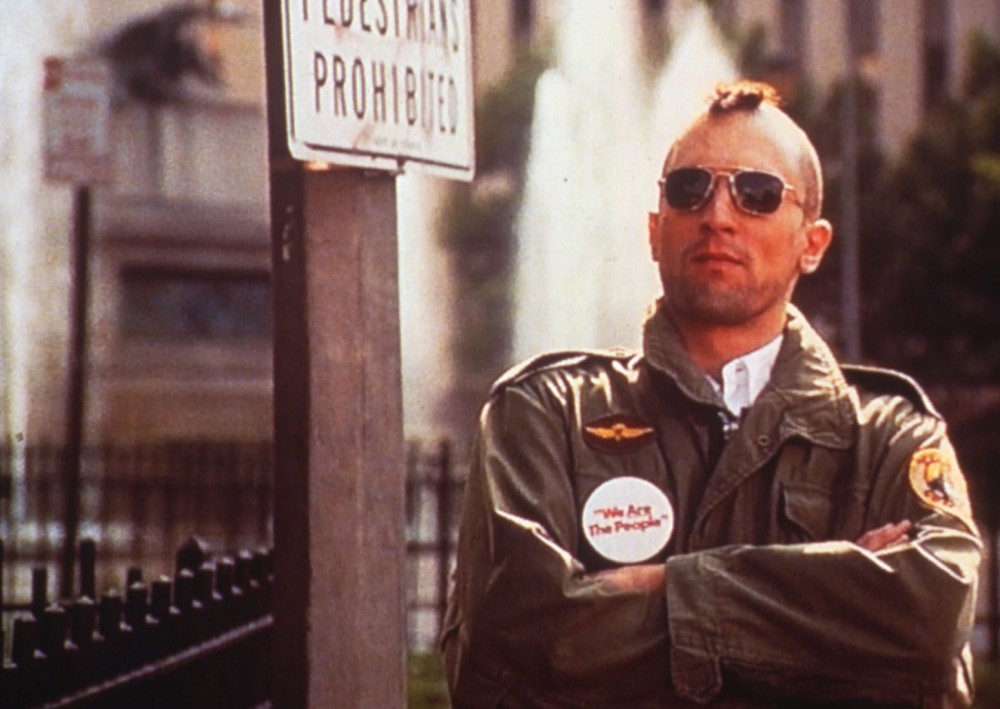 On New Year’s Eve day the boy and I watched a true American classic of film in Martin Scorsese’s Taxi Driver. It’s been probably 20 years since I’ve watched it and revisiting it with my son was so great. Not only does he get to see one of the best films of 70s cinema, but I got to experience this film through his eyes. I loved it more now than I had when I saw it in my teens. I could appreciate how so far ahead Scorsese was in film technique. From the camera shots to the film editing to the use of colors to the amazing Bernard Herrmann score, Taxi Driver feels like a modern piece of cinema. Of course Paul Schrader’s script is electrifying, using language in such a coarse, realistic way. He makes these characters real. And the cast? Damn. Robert DeNiro is on fire here. He’s so good showing us both a naive, almost innocent character, while at the same time a dark, violent nature just under the surface. They never talk about his experiences in Vietnam, but you can tell it affected him. Can’t sleep so he works the night shift, sometime 12 hour shifts. He drinks to calm his nerves and is obsessed with the filth of the city. He’s a quiet soul on the verge to becoming the next mass shooter.

We also watched The King of Comedy, also directed by Martin Scorsese and starring Robert DeNiro, Jerry Lewis, and Sandra Bernhard. It was supposedly part of the inspiration for Todd Phillips’ Joker film, along with Taxi Driver, and after watching both films together I can say that feels pretty accurate.

I’d always known of The King of Comedy but had never watched it. I think I may have seen part of it as a kid at my grandma’s house. She had cable and we did not, so whenever we went there I always made sure to watch as much R-rated fare as I could(the adults were usually getting drunk upstairs out on the lake so I was free to watch boobs and blood.) It didn’t really capture my attention then, so I moved onto Nick Rivers and Top Secret. After watching it I can say I’m glad I finally took the time to check it out. It’s an odd one in Scorsese’s filmography. It’s humor is definitely of the gallows variety, and most of the characters are genuinely disturbed or just unlikable. But despite that I found it pretty engaging.

DeNiro’s pencil-thin mustache and terrible suits made him look like an extra from Robert Zemeckis’ Used Cars. He does a great job of being the needy and wanting wanna be comedian that if he won’t be given his shot of fame, he’ll take it by force(literally.) Jerry Lewis as the talk show host Jerry Langford plays it straight here and does it very well. Despite Lewis being an ass in his real life, I’ve always liked his work. Especially when he’s cast against type like in this. And Sandra Bernhard does the psychotic super fan very well. A scene where she tries to seduce a heavily taped up Langford over a candle lit dinner is both kind of genius and skin-crawling.

What’s next? Well we need to watch Casino. That’s high on the list. I also want to re-watch Once Upon A Time In America, The King of New York, Donnie Brasco, and Scarface. Boyz In The Hood and Menace 2 Society possibly? Ooh, Colors with Penn and Duvall. That’s one I haven’t seen in years. My son is up for it. Who knows where we’ll go from here. Bergman, Kurosawa, P.T. Anderson, Altman, or maybe go in the opposite direction. Find some absolute 70s and 80s cheeseball flicks and see what happens.

Sky’s the limit with open minds and unlimited streaming right at our fingertips.

3 thoughts on “Revisiting The Classics : The Films of Scorsese and Coppola”