Few artists evoke such visuals and imagination in their music like the production duo Alone in the Woods. AitW, which is comprised of studio wizards Jon Dobyns and Lonn Bologna, take the art of songwriting and songcrafting to new levels of meticulous beauty. Their self-titled debut with Burning Witches Records last year was one of my personal highlights in 2018. While locking into eerie vibes with tracks like “Bird Traps”, “Mother of Deers”, and “Digging Holes”, their true talent was crafting crystalline sonic worlds within a 4 or 5 minute track. Combining a mixture of film score vibes, early 80s alternative electronic music, pop hooks, and injecting the right amount of groove, Dobyns and Bologna created an album with a bevy moods, flavors, and vibes. Oh, and production you could cut with a knife.

The sound of AitW is all visceral and all feel.

Back in August Alone in the Woods teamed up with the amazing Cadabra Records for the next AitW album(if you haven’t checked out Cadabra Records, do yourself a favor and explore. Absolutely brilliant people putting out brilliant art.) That album is Kwaidan, a record based on the Lafcadio Hearn book of the same name. Though instead of making a soundtrack for a book, Jon Dobyns and Lonn Bologna wanted to make an album inspired by the world of Kwaidan. They succeeded. The record feels like a whole new level for Alone in the Woods. It’s ornate, airy, beautifully constructed, and to my ears an absolute triumph of production.

I was curious how all this came about, so I reached out to Jon Dobyns to see if he’d be willing to answer a few questions about Kwaidan and how it all came about. He said absolutely. Read our conversation below.

J. Hubner: How did you guys decide that scoring Lafcadio Hearn’s KWAIDAN would be the next Alone In The Woods project? Has this been a long in-the-works album?

Jon Dobyns: Shortly after our Burning Witches debut was released I sent a copy to my friend, Jonathan of Cadabra Records, who I thought would enjoy the album. Jonathan messaged me weeks later asking if AitW would be interested in working with Cadabra, and I replied with much excitement and curiosity. We were ready to jump back into the writing phase, so the timing worked out perfectly.

J. Hubner: Cadabra is an amazing record label. Were you concerned about fitting into their aesthetic?

Jon Dobyns: Knowing the unique aesthetic Cadabra had created for themselves, I wanted to be sure they were comfortable with the new AitW’s effort being treated and promoted as the sophomore album, and not only the spoken-word vinyl that fans have come to love them for. We had a brief discussion on how to make everything work, and choosing a story aligned with the Cadabra brand. Selecting Kwaidan made complete sense for Cadabra, and along with AitW harnessing inspiration from. We felt that we could make it our own.

From an outside perspective, we wrote and produced the album as the follow-up from the debut.

J. Hubner: How did you approach this record?

Jon Dobyns: After establishing the overall theme and underlying story to take inspiration from, we really just began writing freely from an honest place.

J. Hubner: It does sound like AITW, but it’s also so ornate and delicate at spots. From the instrumentation to the arrangements, it feels more like a classical piece than modern electronic. Who or what were some music touchstones you were pulling inspiration from? Any composers you looked to?

Jon Dobyns: I do feel there are classical elements in the structure in addition to the instrumentation. I have been listening to classical composers like Gershwin, Brahms and Bach and was shocked how those elements seeped into the album. There’s a natural whimsical flow that some of the tracks carry.

J. Hubner: Did the writing and recording process differ from how you two approached the first record?

Jon Dobyns: Lonn and I had spent so much time overthinking records in the past, and with previous projects, focusing on touch points. Writing this album was a therapeutic process, as we let pieces evolve naturally by writing freely. Writing this album for Cadabra definitely challenged us as producers and musicians.

I consider Kwaidan a turning point for AitW. I think with the upcoming LPs you’ll be able to hear where certain techniques began. 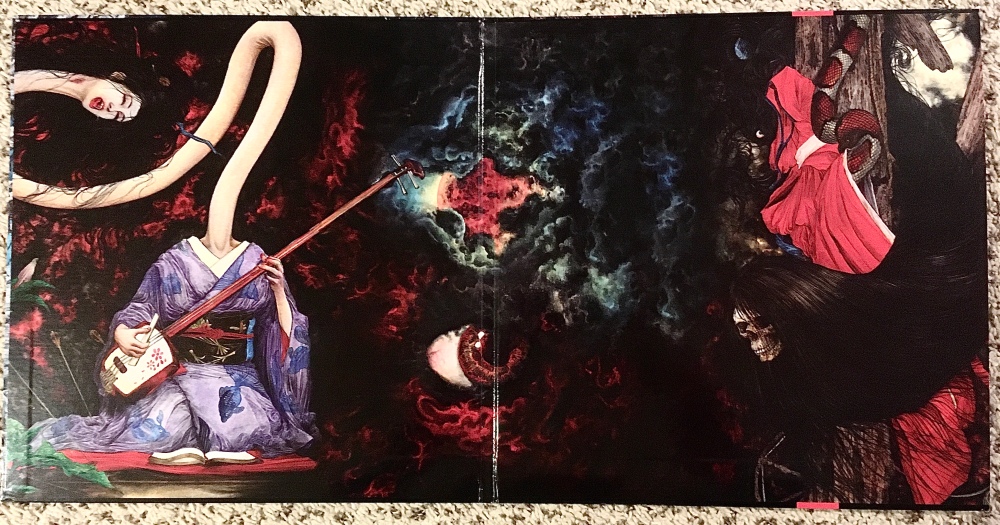 J. Hubner: Tell me the history with KWAIDAN for you guys. And what I mean is, what was your first exposure to it? Was it through Kobayashi’s 1964 film adaptation, or was it through the book? What struck you about the material? There is an appeal to the story that somehow translates well musically.

Jon Dobyns: I first saw the film in my early 20s and fell in love with with its atmosphere. I read the book to re-familiarize with the stories, and wanted to evoke specific moods from various stories into our tracks. But I didn’t want to re-watch the film until we finished the record. I wanted to try and keep it from influencing the album too much.

J. Hubner: I’d like to get a little deeper into the recording process a bit. What are we hearing on the record? Were these songs recorded live with musicians? Virtual instruments? I’m just fascinated with the sound of this album. It has such an airy quality to it.

Jon Dobyns: We spent a lot of time carefully balancing organic instrumentation and electronic elements. AitW is a production duo, so there is always going to be electronics written in most tracks. One thing we spoke about when writing Kwaidan was that it needed to sound like the next AitW album, not AitW soundtracking the story. With that said, I do believe it pushed us to evolve.

Live percussion helped contribute to the airiness you mention. The live percussion, paired with woodwinds and plucked instruments really drew us in. I think the way we freely allowed for pieces to even become playful at times. I guess that chalks it up to the organic approach we took.

There’s a bareness and stripped down quality we never experimented with before Kwaidan. That, coupled with Lonn’s production skills, really gave the album a unique sound.

J. Hubner: Another incredible aspect of the album is that artwork by Zakuro Aoyama. It’s brilliant, and it totally captures the vibe of the album. How did you get involved with Aoyama?

Jon Dobyns: Aoyama’s artwork absolutely blew me away the first time I saw it. He’s an artist who works exclusively with Cadabra. When we began the Kwaidan project, I remember Jonathan saying he had a guy that was perfect for the job. You can tell in Aoyama’s artwork how connected he is to the piece and the story itself. The attention to detail, with every strand of hair drawn out, is the work of a masterpiece. When you work with a team who understands the level of quality and complexity that goes into a release like Kwaidan, is really humbling.

J. Hubner: So where does AITW go from here? Do you have the next project in mind? Another adaptation of a novel or film? Or more of a ‘from scratch’ approach?

Jon Dobyns: AitW will begin pre-production and writing LP3 this month, actually. Another original album. I’d like to think of this next album as our most ambitious to date, but you can tell us when it’s released. You can expect more wild, improvisational elements with global influences and orchestral pieces. More importantly, expect us to flip it on you again as we explore darker themes.

Kwaidan is still available thru Cadabra Records and Mondotees. Grab a copy before they’re gone.