When I go back to those classic thrash albums of my painful and awkward teens I always have to bring up my older brother. If it weren’t for him I would’ve been stuck in the cycle of hair metal and 12 bar blues far longer than I should’ve been. His 6 years on me gave him the foresight to acknowledge the pure genius of “the big four”: Metallica, Megadeth, Slayer, and Anthrax. You really don’t even have to venture out of those four if you don’t want to. No need when you have albums like Master Of Puppets, Peace Sells…But Who’s Buying, Reign In Blood, and of course Among The Living in your collection. Those four records are a microcosm of misspent youth, societal paranoia, middle finger to authority, horror film admiration, and everything else that appealed to 14-year olds that wore “I Am The Law” t-shirts and attempted to grow their hair long and mingled in Midwestern basements plotting to take over the world.

Of the big four, Anthrax always seemed to be the guys you could hang out with the easiest. There was a hell of a lot of brooding going on in the Metallica, Megadeth, and Slayer camps back in the 80s. A lot of self-serious 20-somethings getting drunk, strung out, and generally going for the nihilistic approach to proper rock living. Maybe it was growing up on the east coast, but Anthrax were just these fun dudes that loved comic books, horror movies, skating, and Stephen King novels(they probably loved music, too.) They never seemed to take themselves too seriously, which I think appealed to me. I loved heavy, dark music. But I also liked fart jokes, MAD magazine, Monty Python, and cartoons. I think the greater majority of Anthrax did as well. But besides being the dudes you could peruse the comic book store with, they could also play like mothereffers. You didn’t have to be really serious in your demeanor in order to tear faces off with your musical speed and dexterity. Among The Living was proof of that. 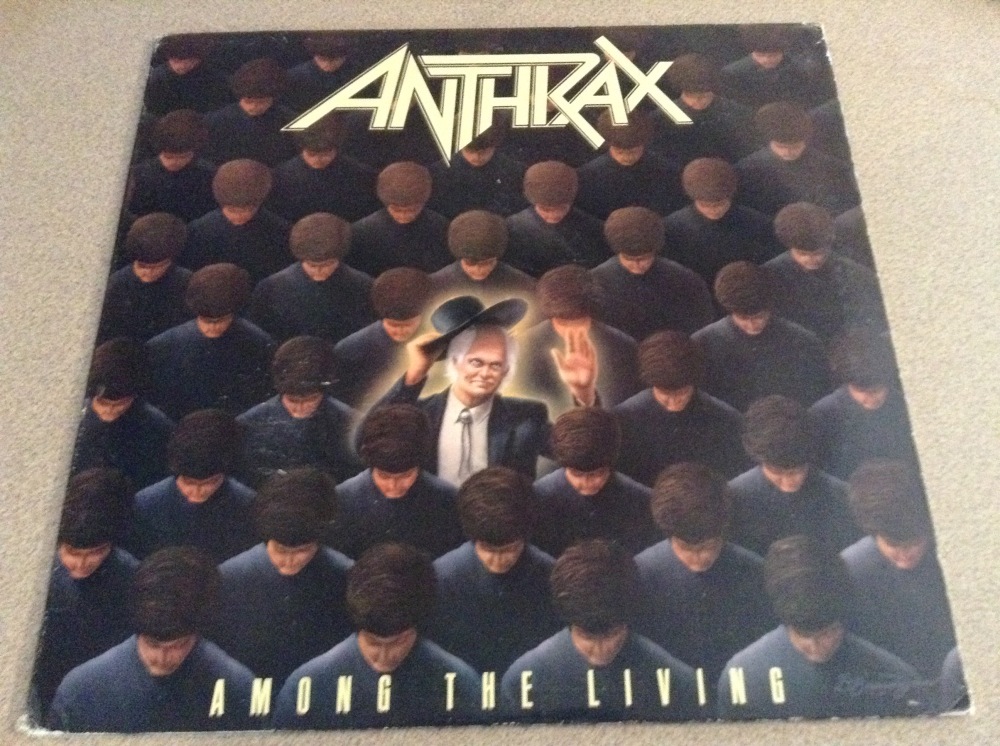 What can I say about this album that hasn’t already been said a million times before? It is THE ultimate thrash/speed metal album. The band’s hardcore roots show through, as do their progressive tendencies that will bloom on their other classic Persistence Of Time. There’s also plenty of nods to the band’s love of horror, comics, and pretty much whatever else they were into at the time. “Among The Living” was based of Stephen King’s The Stand, and in-particular the main antagonist Randall Flagg. “Disease! Disease! Spreading the disease. With some help from Captain Trips, He’ll bring the world down to his knees“, Joey Belladonna sings over a rapid fire drum part from the great Charlie Benante. Scott Ian and Dan Spitz chug out riffs like pros while Frank Bello lays down some serious low end. It’s, for me, one of the best openings on any speed metal album(“War Ensemble” on Slayer’s Seasons In The Abyss a close second.) Then you are thrown into the mosh pit with “Caught In A Mosh”. My daughter came home from school yesterday and said some kids said they were going to start a mosh pit after school. The cops showed up for this supposed event. I asked her if she knew what a mosh pit was. She said kids getting in a fight in a circle. I told her no, it’s guys(and gals) showing each other their mutual appreciation for aggressive music by running around in a circle and pushing and kicking each other. It’s like bonding, for the leather-clad and disgruntled crowd. She said “oh”. I asked her if there was going to be music involved for this supposed event and she said no. Pfft…amateurs. 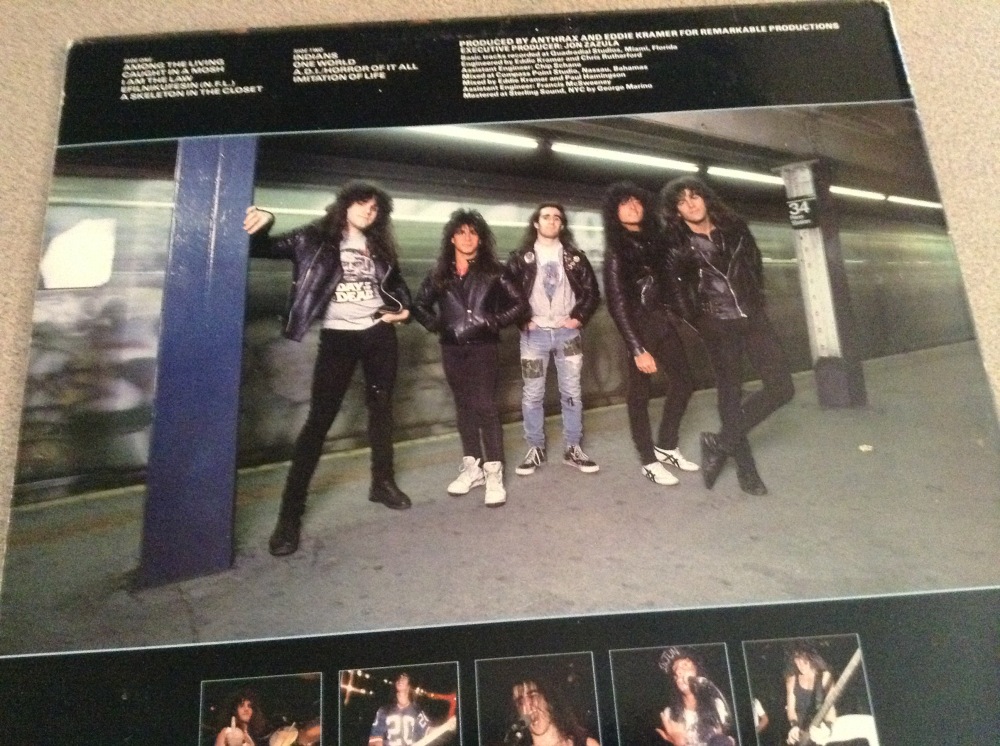 “I Am The Law” is their ode to Judge Dredd, and not that horribe Sly Stallone version. The hardcore one from the comics(the 2012 film was much better with Karl Urban.) I have to say, before this song I had no idea who Judge Dredd was. I hadn’t gotten into comics back then. I was just a coddled teen getting his kicks from late night tv and Fangoria Magazine. “Efilnikufesin(N.F.L.)” is a nice snarky battering ram of hardcore tendencies that give a middle finger to the mindless droves doing nothing with their lives. It’s a skate punk staple. Another nod to Stephen King is the excellent “A Skeleton In The Closet”, which is based on the novella “Apt Pupil”. I can remember reading “Apt Pupil” from my dad’s worn and weathered copy of King’s Different Seasons after I’d heard the song and being kind of blown away by how accurately these New York City thrashers captured the story. “Indians” is one of the best songs on Among The Living, and a live staple in their set. It really shows the depth Anthrax’ writing can get to. “Medley: A.D.I./Horror Of It All”, or “Arabic Douche Intro” starts out with a short acoustic piece(like many songs of this metal era did), then it rolls into some serious chugging guitar for a nearly 8-minute metal riff-o-rama. “Imitation of Life” is a remake of the old S.O.D. song “Aren’t You Hungry?” It’s a closing salvo that will get even the most sedentary up and starting a mosh pit in the living room. For those wanting a little fun thrown into their thrash, you should check out S.O.D.’s Speak English Or Die. It’s big, loud, and dumb fun. It’s also a side band with Scott Ian, Charlie Benante, and their original Anthrax bassist Dan Lilker. It’s silly hardcore fun. 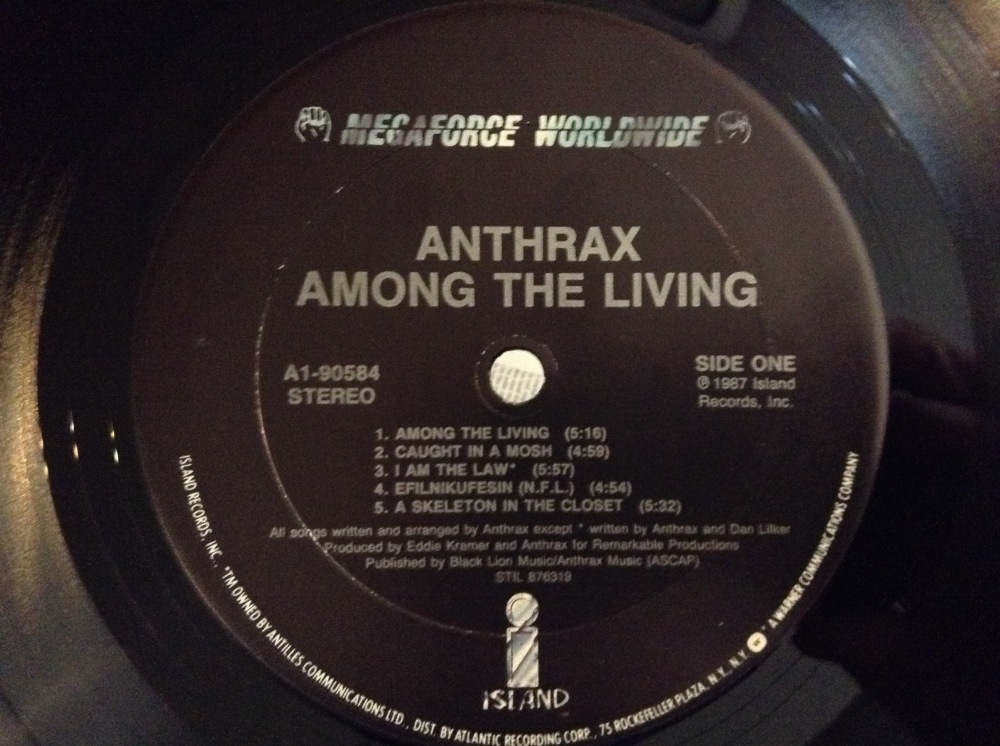 So there you have it. One of THE greatest thrash/speed metal albums ever from one of THE greatest thrash/speed metal bands to walk the face of the earth. Among The Living and Anthrax. Anthrax earned that ranking by not elevating themselves above the guys and gals that bought their albums and proudly bloodied themselves up in the mosh pits at their shows. For the most part, Anthrax were just like you and me. They loved KISS, Motorhead, Black Sabbath, and Judas Priest when they were teens. They idolized those bands and got lost in their records late at night in their bedrooms growing up. They wrote about what they loved, and most of what they loved I loved, too. They wrote serious metal, but they also loved hip hop and even made a hip hop song of their own(“I’m The Man”.) They loved horror movies. Joey Belladonna was even in one back in the late 80s(1990s Pledge Night.) They loved comics and Stephen King and used both as inspiration for their songs, and Among The Living contains all the good stuff. The great stuff.

Nothing else to say, except mublanikufesin!