For it being only the second week of February I feel like there’s been an amazing amount of new music that’s hit our ears already. At least I’ve written about a lot of new music. I’m not complaining, man. January and February are typically pretty barren of new music off the bat. It’s usually March and April when bands start to drop new tunes. I guess though, being the times we are currently in, artists and independent labels can drop new music whenever they damn well please.

So hell yeah, thanks for getting the year off to a good start Isvisible/Isinvisible, Alone In The Woods, The Heartwood Institute, Hattie Cooke, Old Dark House, Besnard Lakes, Luis Vasquez, Camp of Wolves, New Frontiers, and SOMAFREE INSTITUTE.

Instead of dropping some new and heady tunes on you I want to bring to your attention some older heady tunes. A couple of years ago I discovered the amazing drummer/composer/jazz wunderkind Makaya McCraven. Somehow I found myself listening to his album Universal Beings, an album which consisted of four unique shows recorded in L.A., Chicago, London, and New York. Each show was recorded with a different set of musicians and each has its own distinct vibe, from groove-heavy to experimental. I was floored, especially given the experimental nature of his cut-and-paste editing to his songs. I followed that up with his debut LP In The Moment. Amazing groove and beat-driven jazz album that has turned into one of my favorite albums of the last few years. Once again, there’s more there going on than you think.

McCraven is a “drummer, producer, beat scientist” according to his website. He creates this totally unique sound that mixes jazz, experimental, and hip hop, but in a way where his cut and paste creations come out flawlessly. You’d never know that what you were hearing were looped and extended versions of live takes in the studio and stage.

I started looking around to see what else I could get of McCraven’s on vinyl and I came across a record from 2017 called Highly Rare. Highly Rare was a show recorded at Danny’s Tavern in Chicago back in November of 2016. The show was recorded on a 4-track cassette recorder, then chopped up and repurposed into something else entirely by McCraven. What it ends up being is a lo-fi, beat-heavy mix of blues, trance, and psychedelic music. It’s unlike anything I’ve heard.

Makaya McCraven can be found in the jazz section of any music store, but he’s far more than that. I can honestly say I’ve never heard anything quite like Highly Rare. Albert Aylor, Pharaoh Sanders, Sun Ra, and Andrew Hill are all considered jazz as well, but that’s like qualifying Frank Zappa, Pere Ubu, and Captain Beefheart as just rock. McCraven makes improvisatory, free-form jazz with jazz musicians, but then manipulates and repurposes those raw recordings into beat experiments.

Listening to his work on In The Moment and Universal Beings then hearing Highly Rare is like discovering that lone DNA strand where his sound originated. The nature of the wobbly cassette recording only enhances the feeling that you’ve found something truly special.

There are individual tracks here, with side one containing five tracks and side two containing three. But listening to it everything sort of bleeds together, creating this woozy listening experience. You get the humidity of Danny’s Tavern. That still remains even after all the editing and cutting and pasting. You can imagine the heat of a small club packed with patrons as McCraven and his musical guests for the evening(which included Junius Paul on bass, Nick Mazzarella on alto sax, Ben Lamar Gay on cornet, diddley bow, and voice, Gira Dahnee on background voice, and Lefto on turntables) crank up the heat on the stage. Given this was November in Chicago, you can also imagine that Midwestern chill just outside the walls. 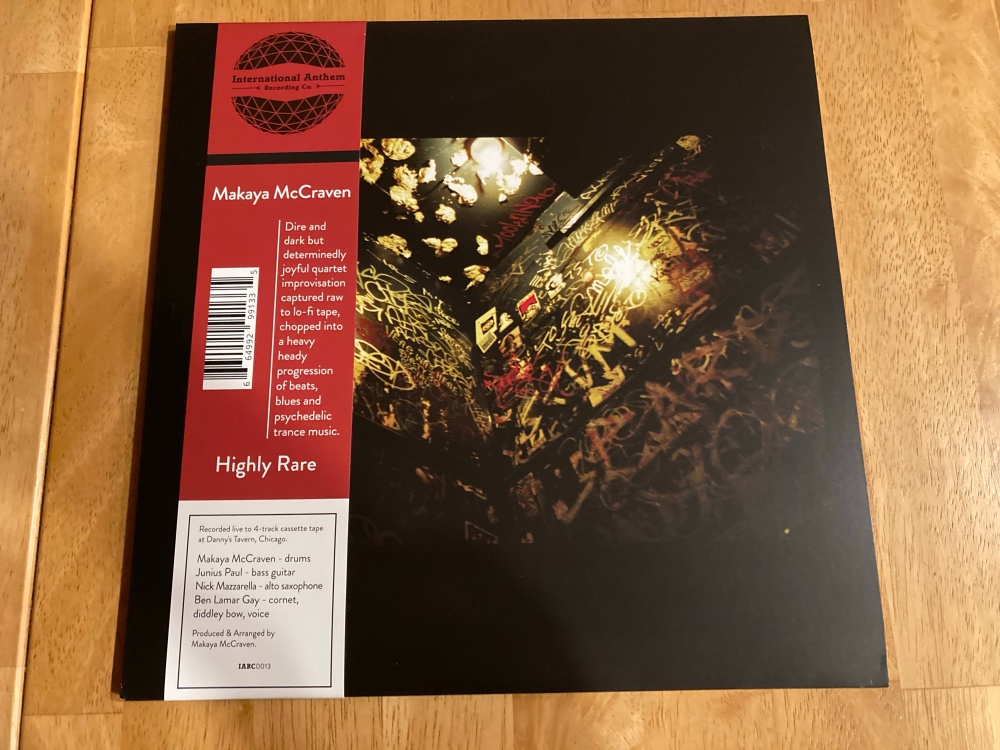 “Danny’s Intro” sounds like the typical greetings and salutations before a band counts out that first song, opening with a “Yo yo yo yo yo yo yo! How you all doing tonight?” before the song morphs into an almost noir-ish fever dream. “The Locator” is a lead-heavy drum and bass groove, Paul and McCraven paving a solid foundation for Mazzarella and and Gay to lay some sweet horns over top. It’s a slinking, slithering groove that never lets up.

“Above & Beyond” is the perfect example of the woozy magic McCraven is up to in the studio. A pretty standard uptempo rhythm is going on here, but it feels looped and a little otherworldly. Nick Mazzarella’s sax takes your attention away from the studio trickery going on, but soon enough you realize things aren’t what they seem. Pay attention and you can almost see the gears turning in McCraven’s imagination as he becomes the scientist in the studio, creating a whole new beast from the original one. “Venus Rising” is a slow burn of a track, and one that builds to a cinematic crescendo.

“Left Fields” opens side two with both tribal power and experimental glee. It seems we’ve left Danny’s Tavern for a great and vast landscape of fury and ancient vibes. Over the course of 11+ minutes the track washes over you in various states of intensity and urgency. This track locks into Chicago’s experimental music scene and its storied history. McCraven creates a psychedelic cut n paste monolith of a track here.

Highly Rare is not where you want to start with Makaya McCraven, but it is the perfect example of his “beat scientist” nature, fearlessness as a composer and band leader, and his expertise as a producer. Of course, the drumming here is pretty great as well. You should start with In The Moment to get a feel for his particular magic. Then take a detour into Highly Rare and get a taste of the raw goods. Main lined creativity and free-form jazz-meets-hip hop-meets-psychedelic-trip.

5 thoughts on “Above & Beyond : Makaya McCraven’s ‘Highly Rare’”