Lately, creating music has become a fun thing again. For quite some time I’ve felt like I’ve just been treading water musically, so to speak. The process of writing and recording had always been my favorite thing; micing amps and drums, getting levels, finding that perfect tone, and making what I heard in my head come to life. But at some point that process started wearing on me. The time it took to get it all put together, plus the time alone just to dedicate to writing and playing every day like I’d had years ago, just felt as if it wasn’t there anymore. Probably because it wasn’t there.

For the past three or four years I found recording with a little synth and programmed drums satiated that creative appetite, with the occasional guitar thrown in for good measure. But I’m just not cut out for making electronic music. I love electronic music. It’s been something I’ve found much joy in over the last several years, so attempting to make it myself seemed like a logical step creatively. While it was fun, there was something missing. I’m not a tech-savvy guy, so recording on a computer still doesn’t compute with me. And I know nothing about synthesizers, so what I came up with was pretty amateur level stuff.

Despite not having the time(or patience), I still missed creating with guitars, bass, and drums. I started to just go downstairs and play. No goals in mind, just plugging in and playing guitar. It felt great. Making noise in the studio for the sake of just getting those synapses popping(and also maybe working on those callouses.)

With my son playing drums, that’s also been an inspiration for me to get back to playing. We recently headed to Sweetwater Sound and bought a new snare for the drum set downstairs. I’ve had that Ludwig 5-pc set since 1995, and everything is still original(of course I’ve changed the heads over the years.) Back in early spring of 2020 we bought a new kick pedal and hi hat cymbals. But with that new snare the drums seem to have come back to life. It inspired me to sit down and start playing them more. Which then inspired me to want to record the drums.

Which led me back to writing again.

Lately what I’ve been doing is recording a loop on my Boss Looper pedal. A guitar riff or a synth riff, whichever I’m hearing in my head, and then I’ll record that on my ancient standalone DAW that I’ve been using since 2002. From there I’ll record drums to the loop, then bass, and then I’ll start filling in with percussion, more guitar, keys, or whatever hits me as needed. From there I’ll pull things in and out of the mix until I think I’ve got the mix I want.

I’ll create two or three over a three week period. Just a skeletal foundation being the loop, drums, and bass. Once I have three songs started I’ll go back and start to work on them individually until I’ve got a whole song. No vocals. Not yet anyways. Right now these are just instrumental tracks. I’m liking being able to just worry about the music. I’ve got nothing really to say with my voice at this point. That may change. We’ll see.

So what’s this stuff sound like? Oddly, like nothing I’ve done before. Very loose, bluesy, and funky. I was wanting to make something like Talking Heads’ Remain in Light, and at first I was sort of getting there (in my own half-baked way, of course.) But then I started listening to a lot of The Budos Band and Medeski, Scofield, Martin & Wood and things shifted a bit. I told my son what this stuff reminds me of is the music from Better Call Saul. That’s sort of where I’m heading right now. Otherworldly and funky, with psychedelic undertones. I’m digging it.

A big part of this creative revitalization is from rearranging the space. I’ve always been a feng shui kind of person. Even as a kid I’d be in my room moving my bunk bed, desk, and dresser in order to find some kind of new energy. While other kids were doing those pre-teen things on Friday nights, I’d be at home in my room basking in new energies while listening to music on my boom box. I wasn’t what you’d call a social butterfly, but it was fine with me. Amazing how different a space becomes when furniture is moved and art is rearranged on the walls in order to accommodate the new vibes. With the new set up in the studio there’s a separation between lounging area and work area now. I’m much more inclined to lock into my creativity now. 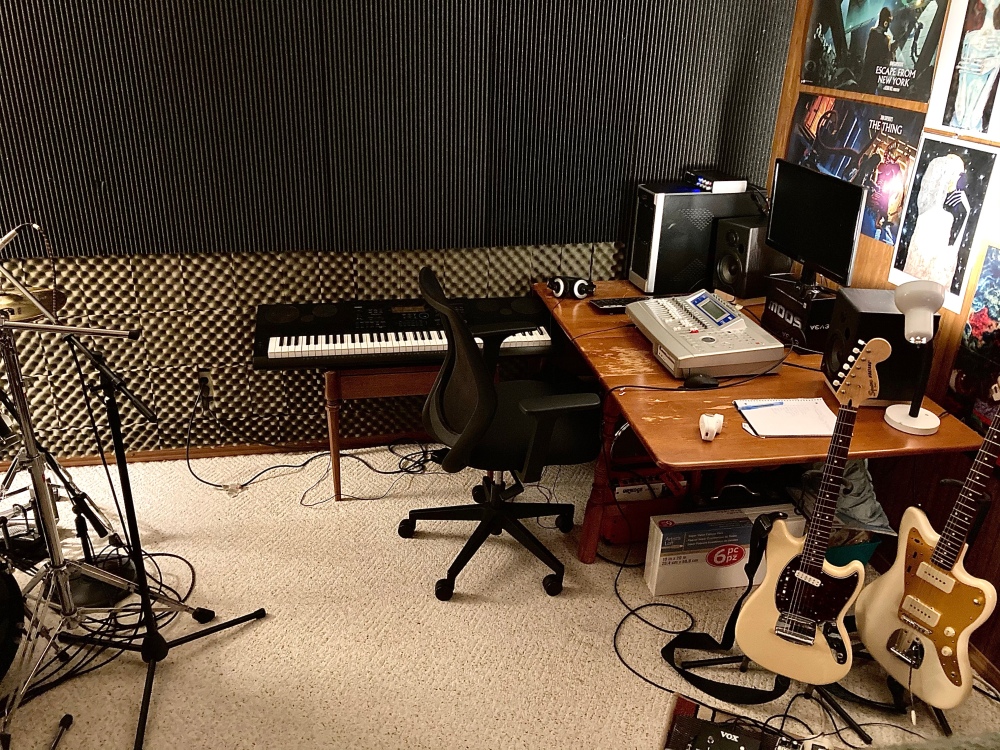 It also helps that the feng shui has rubbed off on my son. He loves rearranging and finding new vibes as well. Given that it’s his space as well I welcome his input. And I’m also hoping that now that the room is at maximum “coolness” levels it won’t be long before he has some buddies over to start jamming and doing the high school band thing.

As for the dread and anxiety, it’s still there. Last time, back in January, we were at the junction of “stop the steal” and insurrection. I was also preparing to send my oldest to NYC for a winter term internship. Fortunately both of those things worked out(though does political strife ever really work itself out?) My oldest is doing great in New York. She’s locking into the big city vibes and adapting very well. I could see her living there for good some day. Only time will tell. She is applying for another program that will keep her in New York for June and part of July. I hope she gets in. 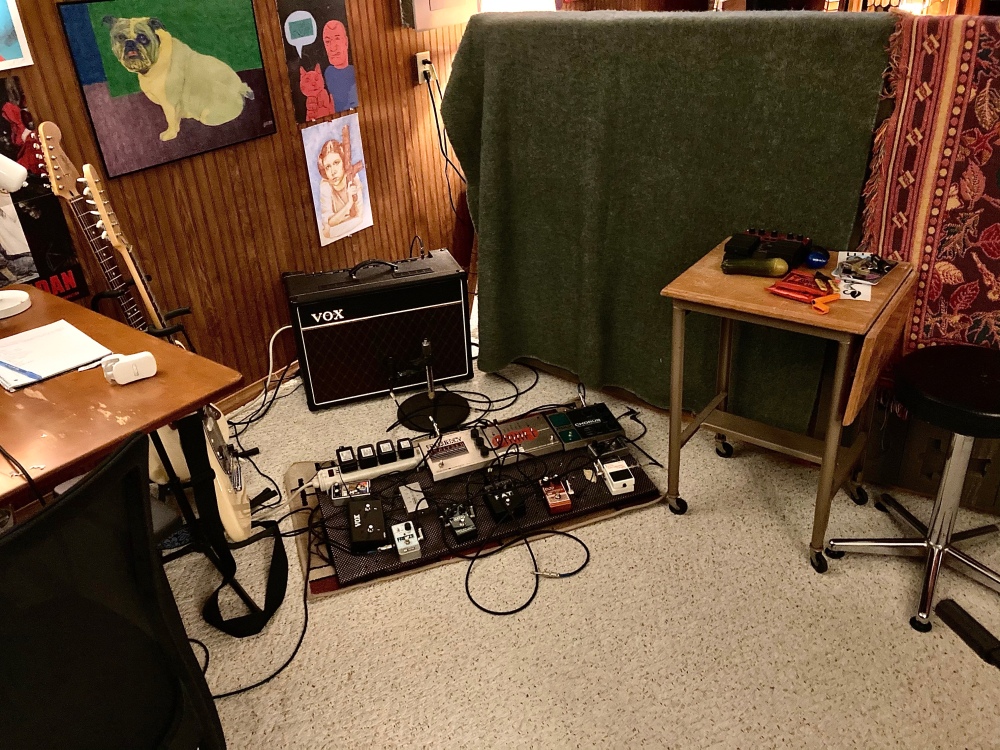 Anxiety is a weird thing, which is to say our brains our a weird thing. Just yesterday it hit me. I can’t follow it back to anything in-particular. There’s nothing out of the ordinary stressful happening, yet last night my stomach felt tied in knots and I was in fight-or-flight mode. All day I was fine, but then it just drops on my brain like a 2-ton ball of panic. I mean, we’re all living in the midst of some exponential unknowns here. Whether it be political, social, ideological, familial, job-wise, health-wise, or anything else that can cause your brain to buzz. Anxiety isn’t Mr. Obvious. It’s more like Admiral Vague. Or Captain Subtle. You don’t see it coming till it’s there.

I think I have an idea where this latest bout stemmed from and it’s a pretty ridiculous place. I won’t go into detail. I’ll just say I will remove it from my head space and hopefully that will help.

So if you need a change, go rearrange a room in the house. Could be the bedroom, the living room, or maybe a space that you find where creativity blooms for you. Sounds silly, but it really does make a difference.

I hope you’re doing well, wherever you may be. Don’t let the bastards get you down.

13 thoughts on “Writing Music Again, Creative Space, and Tamping Down The Dread…”